'This BLACK HOLE just isn't BLACK AT ALL' snarl boffins

Possibly something it ate 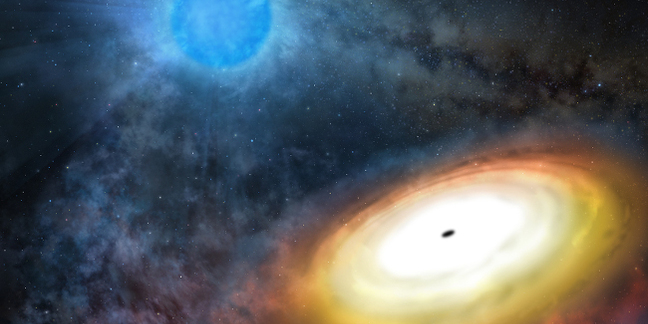 Boffins have found that a nearby black hole is not living up to its name at all by shining as brightly as it possibly can and showing scientists just how much more there is to learn about the astronomical phenomenon. 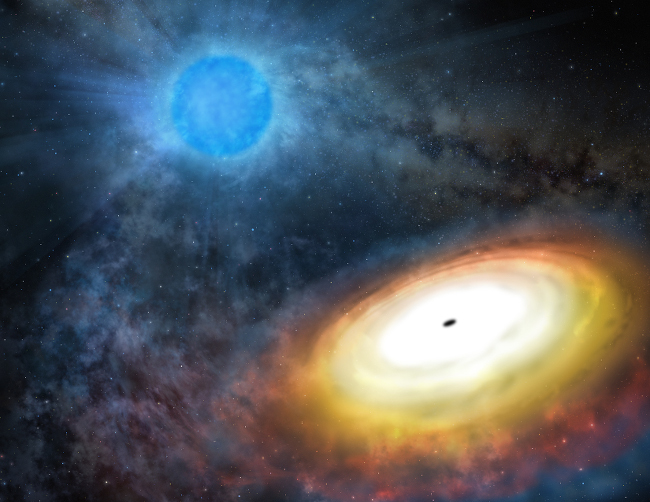 Astroboffins have long been puzzled over the source of ultraluminous X-ray light in an arm of the Pinwheel Galaxy, just off the handle of the Big Dipper. While they could ascertain that the source, called ULX-1, was a system made up of a black hole and a star orbiting each other, they couldn't make the maths on its estimated mass and brightness add up.

The light was shining so brightly that the system had to be either twice as luminous or much more massive than it seemed. If it was much more massive than it could be an example of an intermediate -mass black hole, one that's between a hundred and a thousand times the mass of the Sun, which scientists have theorised could be the jumping-off point for the formation of supermassive black holes.

"This has been a very frustrating field to work in," said Joel Bregman, professor of astronomy at the University of Michigan. "We've been looking for indirect measurements that we thought would tell us something, but you'd get ten pieces of information and five would be on one side and five on the other. You'd think, 'This could all be solved if I could just measure the mass directly'."

Eventually, an international team of brainiacs, including Bregman, were able to do just that and found that the black hole was actually a fairly typical mass, but was somehow shining much more brightly than it should have been able to.

"As if black holes weren't extreme enough, this is a really extreme one that is shining as brightly as it possibly can. It's figured out a way to be more luminous than we thought possible," he said.

The black hole is a stellar kind, which forms when a star up to around 200 times the mass of the Sun collapses at the end of its life, and this particular one is only between 20 and 30 times the mass of the Sun. But the luminosity of the black hole shows that something strange is going on in its accretion - the process by which it gorges itself on passing material, growing and indirectly radiating when its meal throws off X-rays as it is rent asunder.

"These findings show that our understanding of black hole accretion is incomplete and needs revision," said Jifeng Liu, formerly of Michigan university and now at the Gemini Observatory in Hawaii for the Chinese Academy of Sciences.

The team has yet to figure out why the black hole is shining so madly, although it could be to do with its diet. It's possible that the collapsed star is feeding off its companion's stellar wind - a stream of charged particles that would give off more light than other material. Another possibility is that bubbles are forming in the disc of material that's falling in, creating additional radiation.

Whatever is causing the light, Liu said it could change the search for intermediate black hole candidates, now that ultraluminous X-ray sources are not guaranteed to be massive black holes.

The full study, "Puzzling accretion onto a black hole in the ultraluminous X-ray source M101 ULX-1", was published in Nature. ®