With 802.11ac Wave 2 due for ratification in December, El Reg had a talk to Cisco's Andrew Myles, Manager of Protocols in the Borg's Wireless Network Business Unit, to get a handle on one of its more interesting characteristics: MU-MIMO.

Along the way, there were some handy reminders.

Myles, who's been around the wireless scene since the near end of the 1980s, reminded Vulture South that the next couple of years will see a replay of the same “how fast does it really go” arguments that have plagued the networking market since we were still using dial-up modems.

The biggest of big numbers that get talked up in 802.11ac are speeds you won't see any time soon – if ever.

As always, people like to highlight the transmission rate at the PHY layer, which is always subject to a protocol overhead discount, even though 802.11ac has vastly improved the overhead compared to its predecessors.

As with 802.11n, 802.11ac gets higher data rates with MIMO (multiple in, multiple out) antenna streams to spatially multiplex the signal.

As long as both transmitter and receiver have multiple antennas, and as long as there's path diversity so that Stream 1 has a slightly different travel time to Stream 2 and Stream 3, that works just fine.

In an uncluttered outdoors environment, with a receiver 100 metres from the transmitter and no path diversity between the two, you won't see 802.11ac working at the multi-gigabit rates touted for it by those who only ever look at the phastest, sorry fastest, physical layer transfer rate.

However, 802.11ac Wave 2 brings something cool to the WiFi world that will have a material impact on the modern user's experience: Multi-User MIMO (MU-MIMO).

MU-MIMO, on the other hand, allows the access point to split its resources, putting different data on different spatial streams.

To do that, the 802.11ac standard adds some neat tricks of beam-forming to the physical layer, and I have to abandon the “reflection” metaphor. What the access point does is to use the way signals interact between different antennae, allowing it to form moderately-directional “lobes”. 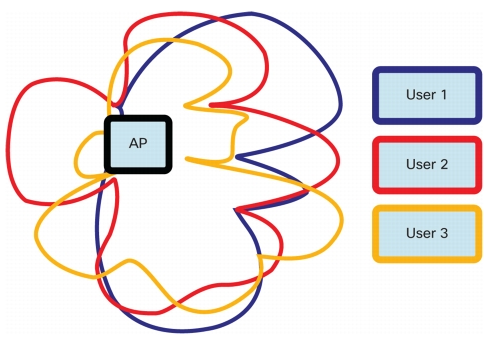 In an operation called “null steering”, the access point also minimises User 1's signal in the direction of the other users.

Alas: MU-MIMO only works in the download direction, because the necessary diversity of antenna location is very hard to achieve in something like a mobile phone or tablet. And it doesn't work at the highest rates of modulation, because the diversity isn't perfect – different users' traffic will experience some noise from each other.

You could observe that this isn't much benefit to the end user: in an environment where multiple devices are competing for download capacity, they get a slower channel, regardless of whether it's because their all contending for the same capacity, or it's getting spatially muxed between them.

However, MIMO assumes multiple antennas at both ends of the exchange – fine if the receiver is a laptop, with at least some real estate available, but not feasible in a mobile phone. So MU-MIMO lets the base station take advantage of the extra spatial resource to spread its available spatial channels across those clients.

Note that the MU-MIMO only works in the download direction, since your average mobile phone can't do all that cool beam-forming stuff with only one antenna. ®

Bootnote: Thanks to Cisco's Andrew Myles for talking Vulture South through MU-MIMO. ®