A jokey US ad agency recruitment campaign encouraged users to stage fake computer crashes so that they might be able to ditch work early.

The Happy Hour virus from Colorado admen TDA_Boulder came with a series of screensavers that allowed users to claim they were unable to work because their machines had gone wrong, creating a convincing excuse for them to ditch work early in the process.

A choice of three static images, including a representation of the infamous Windows Blue Screen of Death, are offered. Other choices include "Kernel Panic" and "Broken Monitor".

The idea of the tongue-in-cheek recruitment campaign was to promote the idea that's it's possible to have a healthy work-life balance even in the hectic advertising biz, AdWeek reports.

The HappyHourVirus.com site explains TDA's workplace philosophy and how self-inflicted computer problems might play a role in this, presumably when all else fails: "We are all better employees if we achieve something called work-life balance. However, pursuing that goal is not always an easy task in today's corporate culture. Please use the Happy Hour Virus to leave work early and enjoy the company of friends, family or co-workers.”

"We are aware that this might jeopardise your productivity the following day,” continued the site, “but we are willing to take that risk on your behalf. And if this sounds like a philosophy you could live with, learn more about us here," it adds, complete with a link to an employment application.

The whole set-up takes the diametrically opposite line to a job ad from games and comics site Penny Arcade looking for a "Web / Software Developer & Sys Admin" which outlines unashamedly wretched working conditions. "We are quite literally looking for a person that can do four jobs… if you’d like to be at the technical epicenter of it all and don’t mind having a really bad sense of work-life balance, this is the job for you,” the unappealing pitch concludes.

Visitors to the Happy Hour virus site can download fake crash motifs and install them onto their PCs without going through any kind of registration process. The site remains live and open to all, not just those looking for a job with TDA. Removing the fake screensaver involves simply pressing the escape key. 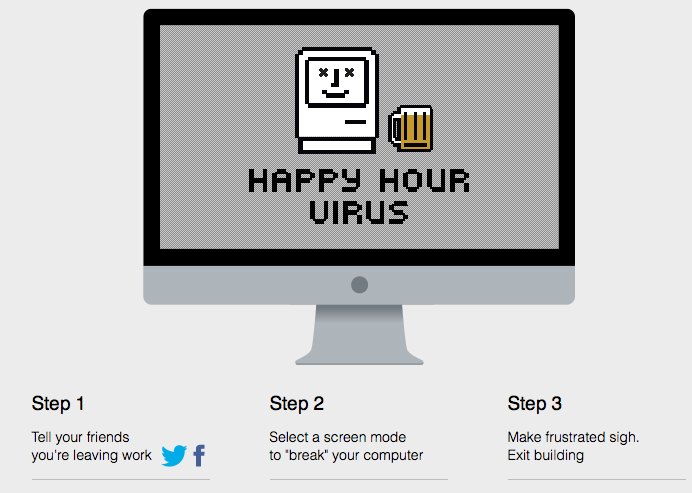 Net security firm Sophos makes the obvious point that the downloads available from the Happy Hour virus site might easily be abused by the workshy. Trivialising computer security is no good thing, Naked Security writer Paul Ducklin adds in a light hearted piece on the campaign, full of tech-themed jokes.

Ducklin's article includes an obvious fake quote from Boulder Online Regulators of Interactive Network Games (geddit) as well as a suggestion to update the Blue Screen of Death theme for Windows 8 and the sarcastic observation that Mac users wouldn't be able to use the ruse because "Macs don't get viruses and thus cannot actually crash". ®