A classic boy nerd if there ever was one, Miller-Kirkpatrick’s other passions, beyond electronics and his young family - Kirsten was born in 1969, Ashleigh in 1971 – were science fiction and movies. During 1973, he designed and built a series of digital clocks for Anderson’s Space 1999, then in production ahead of its 1975 debut.

Now in his mid-20s, and with his fighter-pilot good looks, Miller-Kirkpatrick represented a new breed of electronics devotee. He was no pipe-smoking, tie-and-tanktop wearing middle-aged tinkerer of the 1960s electronics scene - the sort of chap who read "serious" magazines like Practical Electronics and Wireless World - but a hip youngster of the 1960s and '70s, fascinated by microelectronics and eagerly looking forward to something other than a long, boring nine-to-five career culminating in a gold watch, a pat on the back and retirement. 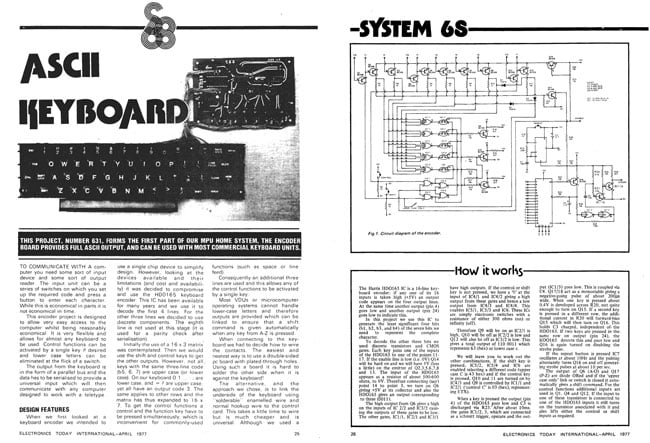 Electronics Today International described a DIY desktop, the System 68, during 1977
Click for a larger image

Always a something of a maverick, Miller-Kirkpatrick couldn’t see himself working for anyone else, and this yearning for independence led him to establish Bywood. He was just 26. His wife helped out with the admin and marketing.

Not merely a competent electronics constructor, Miller-Kirkpatrick quickly proved himself an articulate advocate of the hobby, and he soon came to the attention of Halvor Moorshead, Canadian editorial director of Electronics Today International magazine. The publication had been founded in Australia in 1971 but the following year it was acquired by Moorshead, who promptly relocated it to London.

ETI was brash, cheeky and modern. Unlike the long-running, well-established Practical Electronics, ETI looked like a magazine of the 1970s, not an engineers’ journal from the 1950s or 1960s. Practical’s writers and staff were all known by their initials and surnames; ETI was on first-name terms with its readers.

A new mag for a new generation

It suited Miller-Kirkpatrick perfectly. He started writing articles for the new title and, in 1973, was commissioned to pen its monthly "Electronics Tomorrow" column. He contributed copy to every issue until just a few months before his death, and his byline appears in almost all of the electronics and personal computing magazines of the period. He was asked to write for the launch issue of Personal Computer World, for instance.

John was soon a much-in-demand public speaker too, and both he and his wife were often travelling to conferences and exhibitions to promote Bywood products. John would usually be called upon to give talks about developments in microelectronics and to discuss where he thought the technology was heading.

He knew his stuff. In an obituary to his friend, Halvor Moorshead later wrote: “When I first met John I can’t quite remember, but it was probably shortly after he had developed the first digital clock that I’d ever seen. This would have been in 1971 or 1972 - way before chips that make these things so simple today. The circuit comprised a mass of TTL and the whole thing had been worked out from first principles.

“Yes, John was one of the few people I know who could work from first principles.”

Bywood was moderately successful too. By 1976, Miller-Kirkpatrick was able to say that only 40 per cent of Bywood’s customers were the amateur electronics buffs he had originally set out to supply. Turnover for the 1976/77 fiscal year was just under £100,000. His kits had drawn in professional electronics designers, who used them as time-saving foundations for their own products. He was selling components and kits to “recording studios, consultants an companies such as British Leyland, United Biscuits, ATV and the Training Service Agency.”

Halvor Moorshead later wrote: “Bywood Electronics... was one of the first companies to bring the new high-technology chips to the general public. It was John who designed System 68, which, although it suffered from a few teething troubles, was miles and miles away the first DIY computer ever described [in the UK].”

The System 68 was a machine ETI presented to its readers through a series of articles that kicked off in February 1977, each installment detailing the design and construction of one part of the computer: PSU, VDU, CPU board and such. A couple of others designed contributed parts, but the bulk of the work was done by Miller-Kirkpatrick himself.

Based on Motorola’s 6800 processor, System 68 would, ETI promised, cost readers around £200-250 to build. But Miller-Kirkpatrick knew that a fair few electronics enthusiasts, particularly younger ones, still wouldn’t be able to afford it. For them he designed Scrumpi.

“Bywood Electronics was determined to produce MPU kits at low cost and to this end has evolved a programme of kits based on the SC/MP processor,” he wrote in 1978. 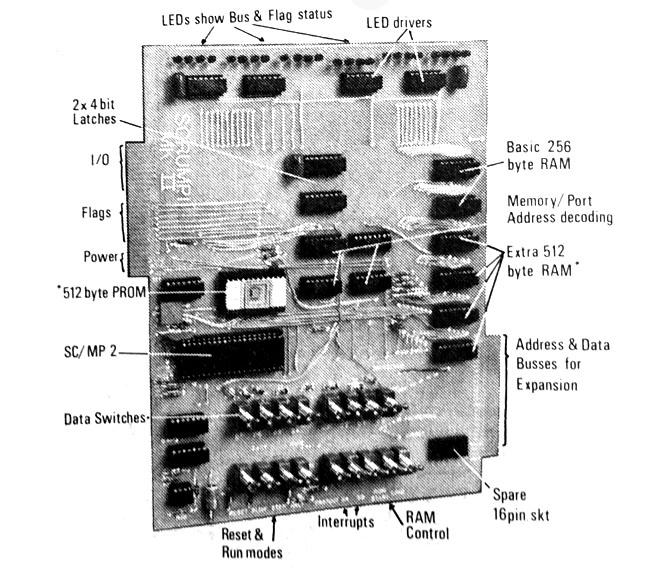 The cheaper machine was based - as would be Science of Cambridge’s MK14 - on the National Semiconductor SC/MP microprocessor, better known by its nickname, "Scamp". Scrumpi was crude: like the original Altair, it used physical switches as input devices. Sixteen such switches were hooked up to 24 LED bulbs as a readout, all of them connected to the Scamp, a pair of MM2112 Static Ram chips - 256 bytes in all - four 74C173 four-bit latches and a handful of other ICs.

An early ad headlined “Oi loike SCRUMPI!’ and showing a crudely drawn West Country yokel, undoubtedly doodled by Miller-Kirkpatrick himself, said: “The switches allow you to enter a program into the RAM and then exec that program. Several operating modes allow for ease of testing. SCRUMPI can be extended to address up to 64K bytes and can be interfaced to ROM, PROM, RAM, EAROM or many types of IO device. SCRUMPI can also be used to replace a SC/MP in another circuit to give full in-circuit testing facilities.”