Miller-Kirkpatrick explained a few years later: “This simple system used LED lamps to show the status of the 8-bit data lines, the 12-bit address lines and four single-bit IO lines; so as not to unduly load these MPU buses we ran the LEDs from CMOS drivers.

“The SC/MP can be easily single-stepped... it can be persuaded to execute instructions at a very slow speed, manually controlled by the designer at his own speed. This allows simple debugging using the LED lamps... At each step the designer can see exactly what effect the previous executed instruction had on the equipment as a whole and if necessary modify that instruction to do something different.” 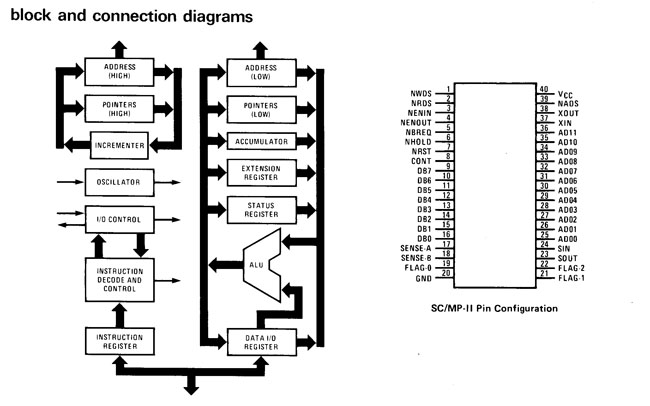 Reviewers praised the Scrumpi’s low price. “With all the articles on microprocessors that have been appearing recently there must be a number of readers who feel that they will never really understand micros until they have actually used and programmed one, and who are therefore wondering how they can get their hands on a system as cheaply as possible. Bywood’s Scrumpi kit may be the answer as it provides a self-contained development system using the minimum of parts, and at £55.56 costs less than most other solutions,” wrote David Johnson-Davies in the August 1977 issue of Practical Electronics. Johnson-Davies would go on to work for Acorn on the Atom and BBC micros, and to run its software arm, Acornsoft.

Yet Scrumpi was clearly very limited. “Aspiring computer programmers who want to forget about the hardware the moment Scrumpi is working would be well advised not to spend their money on this kit,” warned Johnson-Davies. “It is just not a practical proposition to write more than the simplest of programs on the system.”

Miller-Kirkpatrick was fully aware of this, and even admitted to readers of the Scrumpi’s manual that “you will soon realise that Scrumpi is very limited as it stands because it does no more than light up the LEDs”.

But that wasn’t the point. Scrumpi mattered because it allowed punters to learn the basics of microprocessor operation and machine code programming for a relatively modest outlay. It was a foot in the door of the computer world, a stepping stone to the more capable kit Miller-Kirkpatrick knew was only a few years away.

Plenty of other folk understood that too. Scrumpi sold “exceptionally well”, Miller-Kirkpatrick would later claim - some 200 were sold between late 1976 and the end of 1977, an impressive total for the time. The only thing close was National Semiconductor’s own amateur-oriented evaluation system, IntroKit, was then selling for around £70, which was much less than all other evaluation kits offered by chip makers, but the product wasn’t much use without the accompanying KBKit, a calculator-look gadget that hooked up to the IntroKit by way of a ribbon cable and provided a hex keyboard and an eight-digit LED display. KBKit was a further 70 quid. 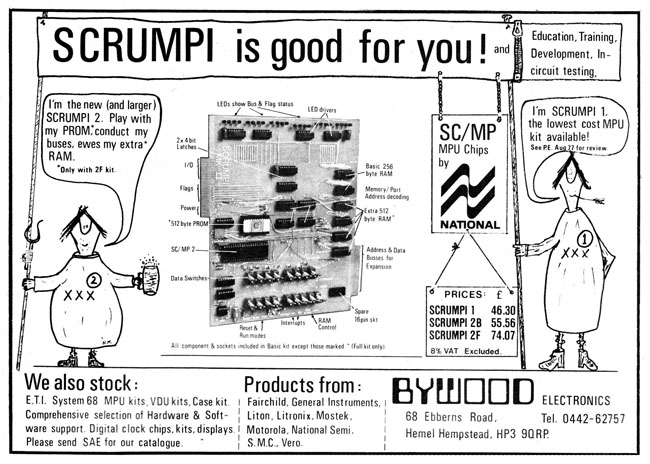 Soon after, National Semiconductor began pitching its LCDS (Low-Cost Development System) which had the same keyboard the MK14 would eventually use, along with four 72-pin slots for RAM, ROM, PROM and IntroKit CPU boards and such, all mounted on a large black stand. It cost £335 plus VAT and began to appear around the time that Ian Williamson was building his own Scamp-based processor board out of old Sinclair calculator parts.

Williamson, about to take a job in the motor industry and so no longer able to run a business selling microprocessor training boards, offered his kit design to Science of Cambridge’s Chris Curry. Curry was seeking a follow-up to SoC’s rather poor Calculator Watch offering. He agreed to market Williamson’s product, only to switch to the MK14, a slightly modified version of the National Semiconductor IntroKit, before Williamson’s hardware was put into production.

Williamson worked on his kit during the spring and summer of 1977, the same time that Chris Shelton was designing the Nascom 1 for Lynx Electronics, and Research Machines co-founder Mike Fischer was putting the finishing touches to the 380Z. The Nascom 1 was formally launched in November 1977, while the first 380Zs began shipping in December that year, though the machine had been demo’d in prototype form as early as May.

I’m not certain of this, being unable to select an address without resetting and stepping through would have been painfully long-winded in the event of an entry error, but I’m pretty sure there were no switches on the address. I believe there were eight control switches altogether, which means there may have been two more the function of which I no longer recall.

Mine started out with 256 bytes of RAM – no ROM on a Scrumpi – which I soon increased to 512, the maximum for which the board was designed. I then added another 1KB on a small add-on board of my own design. My first program was "Mastermind". Output was very crude, you loaded a register with a value you wanted to display and stopped the processor with that value showing on the data bus.

As there was no ROM, you had to reload everything in binary on power down, so I added a motor-cycle battery as backup power and left it on trickle charge.

I worked for Sperry Univac at the time and got an old scrap CRT terminal and put the Scrumpi inside, and wrote a very small hex monitor program with keyboard and screen routines and a tape interface. Of course, this had to be entered manually in binary, but once loaded, further programming was much more efficient.

It was a very crude device, but the low level of the interface was excellent at teaching the basics of how micro-processors worked and were interfaced to.