Hot from The Reg's department of perhaps-a-bit-too-obediently-reporting-the-tech-titans comes news that Amazon.com has floated a plan to deliver goods by un-manned aerial vehicle.

Amazon looks to have teed up a soft interview with CEO Jeff Bezos on US network CBS' flagship news magazine program 60 minutes. That interview “investigated” how the company can cope with the colossal levels of shopping that break out across the USA. Promotions for the story promised a “big surprise”.

Reg man Jack Clark, in the tweet below, had a guess at what that surprise would be.

Given Bezos's buy of Kiva systems, love of automation, and heavy Lab 126 investment, I reckon tonight's surprise will be an AMZN Drone.

And he was right, with Bezos showing off the drone depicted in the video below.

Everything's still very much, pardon the pun, up in the air, with Amazon saying it hopes the United States' Federal Aviation Administration sees fit to allow its plans by 2015. 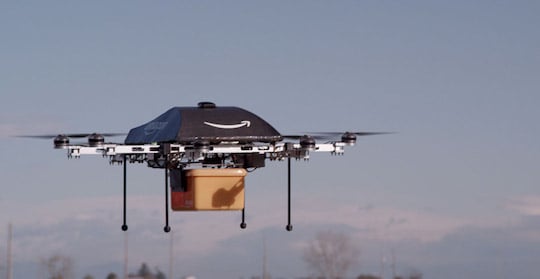 Even if that comes about, the plan raises plenty of questions, courtesy of The Reg's department of hang-on-that-doesn't-make-sense.

For starters, an Australian company has already revealed plans to do pretty much the same thing. A Chinese company has also been trialling a similar service since September, according to the South China Morning Post. Has Amazon bothered to patent this?

Secondly, the drones depicted look wimpy. If one were to order, say, a DVD box set it doesn't look like they would cope. Is that really useful?

Third: The promised service would not reach many people because the footprint that could be served from Amazon's warehouses would almost certainly not cover all of the US population. Does that make this a token effort?

Fourth: The whole plan looks antediluvian. Amazon is not alone in realising that this internet thing is very good at delivering content. Why does Bezos want to deliver by drone when he could deliver by Kindle?

Fifth: The video is very pretty but leaves questions galore unanswered. What if, for example, one lives near a flightpath for an airport? Or in an apartment? Or in a home shaded by many trees?

We could go on. But we'll leave that to Amazon's PR team as Prime Air starts to waft closer to reality. ®