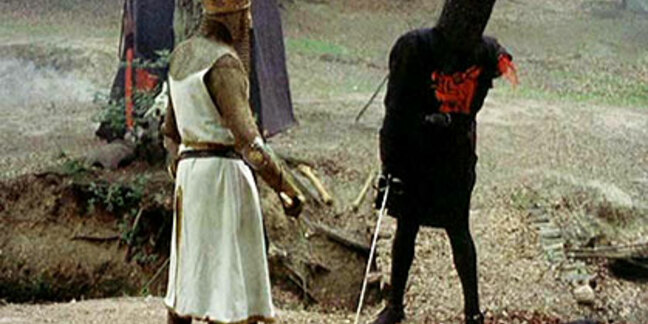 In a move oddly reminiscent of a Monty Python sketch, interim BlackBerry CEO John Chen has urged enterprise customers not to heave the ailing smartphone vendor onto the plague cart to be hauled away just yet.

In an open letter distributed on Monday, Chen insisted that BlackBerry's recent misfortune was only a flesh wound, saying the company was "very much alive, thank you."

"In short, reports of our death are greatly exaggerated," Chen wrote.

Industry observers have feared the worst for the Canadian firm following a series of grave setbacks, including disappointing sales of its most recent handsets, the ham-handed rollout of BlackBerry Messenger for Android and iOS, and a recent abortive bid to be acquired.

Thorsten Heins, the former CEO who oversaw these and other blunders, was shown the door in November, followed by several of his handpicked execs. That left Chen squarely in charge of what many believe will be BlackBerry's final shot at a turnaround.

In his Monday letter, Chen reiterated that he does not intend to jettison BlackBerry's loss-making handset division, but he does plan to steer the company away from the consumer market, and to place increased emphasis on its mobility solutions for businesses, which were the source of its early success.

"As we refocus back to our roots," Chen wrote, "BlackBerry will target four areas: handsets, EMM [enterprise mobility management] solutions, cross-platform messaging, and embedded systems. And, just as important, we will continue to invest in enterprise and security related R&D during our restructuring period."

He emphasized the security of the platform, noting that BlackBerry is the only EMM and handset vendor to receive the US Department of Defense's "Authority to Operate" certification, which allows its technology to run on DoD networks.

What's more, Chen said, despite the recent blows it has suffered, BlackBerry is in a better financial position than many analysts believe.

"We have substantial cash and are not a small VC-backed 'pure play' MDM player seeking additional funds every year," Chen wrote. Specifically, in its last quarterly earnings report, BlackBerry said it was sitting on cash and investments worth around $2.6bn.

That's not to say that BlackBerry hasn't been seeking additional funds of late. Back in October, it was hoping to get itself snapped up by some well-heeled buyer for $4.7bn or more. But when those talks all fell through, it settled for $1bn in loans from a consortium of investors, at the price of reshuffling its executive team.

In his letter, Chen said that investment represented "a vote of confidence in the future of BlackBerry," and he repeated that the Canadian company plans to be "in the game for the long term."

In addition, he said, he is also seeking input from enterprise customers as to how BlackBerry can better serve their mobility needs. Customers who wish to quarrel with BlackBerry's insistence of its invincibility may address their concerns to a special email address set up for the purpose. ®

Hands On If this was full-touch, price tag would be eye-watering