Interference-free photography on a molecular scale

There’s a bunker inside IBM Research's labs in Zurich which will make you want to throw up - at least according to its architect.

It’s a white room - literally. The walls are covered in white foam-like, patterned tiles. But it’s a room that has been specially engineered to block out any interference from any source - noise, electromagnetic, vibration and temperature.

Such is the noise-dampening, he reckons if you put one ear close to one of the walls your inner ear will become so unbalanced by the absence sound and you’ll feel dizzy and start vomiting.

“This shows it works so nicely,” Loertscher told The Reg proudly following our recent visit there.

This is an unproven theory as nobody has yet done this, but Loertscher’s claim underscores the stringent lengths to which IBM has gone to build this room. And, no, The Reg didn't care to try it either on its tour. 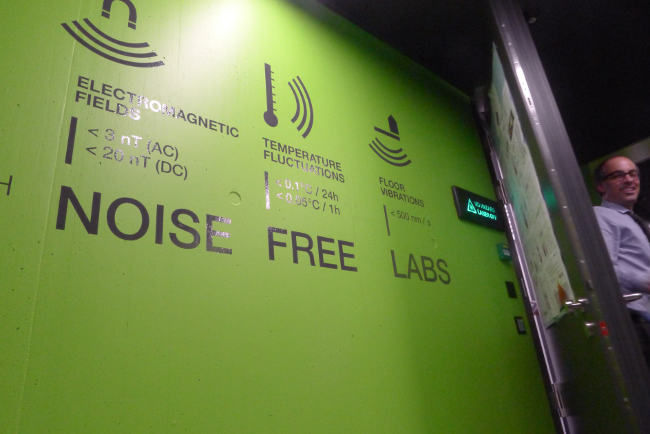 It is here at the underground nantechnology centre that IBM’s white-coats are doing early-stage work on the next-generation of chips – eyeballing atom-sized engineering, fabricating transistors and nano wires at the scale of single molecules and atoms.

The bunker was built in 2011, but in September it became home to one of the world’s best transmission electron microscopes (TEM) – a JEOL JEM-ARM200F. This beast is capable of scanning at a resolution of 80 picometres, the highest for any commercial TEM that corrects for spherical distortion.

It's also the world's only TEM that can be controlled remotely - by computer, from either an ante room immediately outside the lab or in the scientists' own rooms, across IBM's Zurich campus. Following weeks of calibration and fine-tuning, scientists get hands-on training in January 2014 with serious experiments scheduled to start in February.

Boffins will use this giant microscope to examine the structure of nanoscale objects. The idea is to correlate structure and function to produce faster and more power-efficient building blocks further down the road.

“We take the wires and tailor the wires to get the best performance for transistors,” Loertscher said. “The electrons don’t travel the same way in crystallographic variations. We need to look at these wires in detail… we want to know how the architectures and stacks are formed.”

Some tests will see the electron microscope train its beams on the same spot in a piece of material for days just to acquire an image. At this scale even the smallest noise, rumble or temperature shift can deflect the beam and ruin the image. 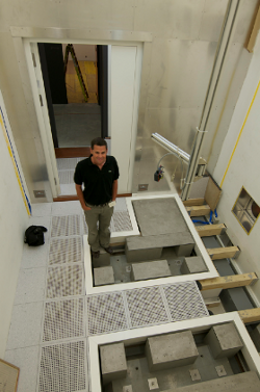 Loertscher and his concrete air springs

“You can look at it in cross-section and see what you’ve made," says Loertscher. "Usually you make things and the result is difficult to look at, but an electron microscope lets you make very small slices – it’s like an X-ray or CRT that lets you look at different sections of material."

Having gone to such extreme lengths to wipe out noise and interference, IBM hopes to make the electron microscope even more accurate.

“This has the best resolution worldwide and we hope to increase the resolution because it’s sitting in such an ultra silent environment. In this lab we can go beyond the peak performance,” Loertscher said.

But how do you build a room capable of making standard fabrication and characterisation processes better?

First, you harness the natural properties of the Earth, by going underground. The bunker was built eight metres under the soil, with all the earth removed from beneath the foundations before they were sunk on solid Swiss bedrock. Next, install a bed of concrete on air springs - up to 70 tonnes of concrete were tipped into the hole.

The idea of carving out the earth and placing foundations on bedrock is to dampen noise and vibrations. Some other labs who’ve done this then pour in sand to kill bad vibes - although according to the Binnig and Rohrer architect this is a mistake as sand doesn’t kill very low frequencies.

Additional dampening in the bunker was provided by the addition of 60cm-thick walls covered with acoustic dampening sponge tiles.

Chambers have been built into the walls to house noise-producing equipment such as pumps, power supplies and transformers, with chambers hidden behind removable tiles. The microscope itself sits on a platform that’s de-coupled from the rest of the floor – which floats on a set of concrete blocks weighing between 30 and 68 tonnes on an air cushion. Their job is to dampen vibrations caused by the operator and the instruments.

If you must have air conditioning – and they must as otherwise things would get pretty close down there – you need to ensure the gear runs silently and that the flow of air itself doesn’t create any disturbance.

As mundane as aircon might seem, Loertscher calls this one of the labs’ “key” systems.

Normal aircon blows in but this motion can create tiny atmospheric oscillations that would disturb the electron microscope and cause the photo image to blur. Also, there’s the problem of the aircon system itself causing acoustic disturbances.

Here, the nano lab's system sucks the air out; air in the labs moves using the pressure difference between the inlet and outlet. The air comes in via perforated plates in the floor and exits through ceiling outlets. The equipment sits 50 metres away to isolate any noise.

Finally, the room is sealed against electromagnetic interference. Nickle-iron alloy has been used in the walls, doors and ceiling to create a closed magnetic cage.

A pair of Helmholtz Coils, each three metres in diameter, have also been installed to control and eliminate interference from the Earth’s own magnetic field. The coils are controlled through the addition or removal of an electric current. A sensor in the room is used to measure fluctuations in the line and harmonics of the Earth’s fields. 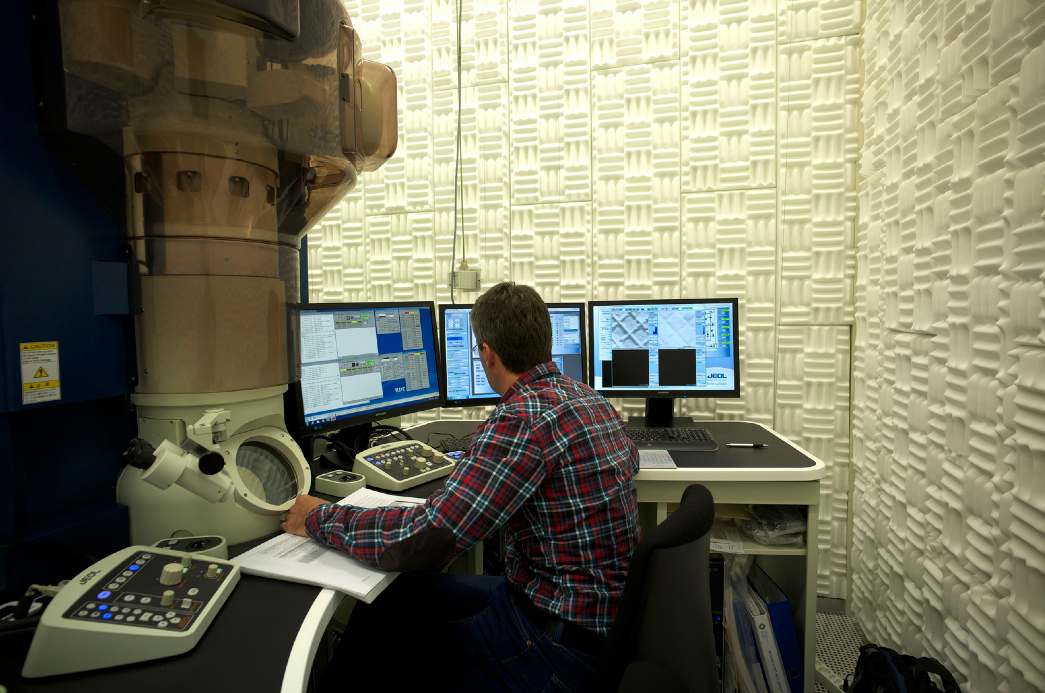 The electron microscope can take days to record a single image

This is a clean room built by a scientist for scientists. Loertscher is not an architect - he’s a research staff member specialising in nanoscale optics and electronics looking at semiconducting nanowires, among other things. As such, Loertscher reckons he designed this facility based on his experience in past experiments, scaling up handy interference-dampening techniques and materials and relying on his own general knowledge.

We have to ask: Wasn't that a bit risky putting the future of IBM's nano-technology research in the hands of an building-design novice?

“I’m very interested in architecture and in engineering things and I felt pretty comfortable building this lab," he tell us firmly. "I wasn’t out of my skill set." ®