SLAPPING an iPhone out of a corporate drone's hand: You're not the only one who longs to do it

Windows Phone in the enterprise: Ballmer's fever dream or the new reality?

Sysadmin Blog Microsoft's Windows Phone platform has received a lot of criticism. The few early enterprise adopters of the Windows Phone 7 platform back in late 2010 gave it a shot with a glimmer of hope that it could replace the iPhone.

But Windows Phone 7 left a lot to be desired, with consumers disappointed by the lack of apps in the Windows Phone Store, and enterprise users left wondering how Microsoft could release a device that had even less management ability than the Apple iPhone.

Corporate control, one dead iPhone at a time

In late 2012, the Windows Phone 8 platform replaced it. There was no upgrade path for existing devices, but again it gave a new hope to enterprise still looking to extinguish their employees' Apple iPhone fixation.

Why is there little love for Apple in the enterprise, and why go for Windows Phone at all? I'm sure you'll all have your different viewpoints on this, and HP have a few reasons they've shared recently but there are a few key reasons. 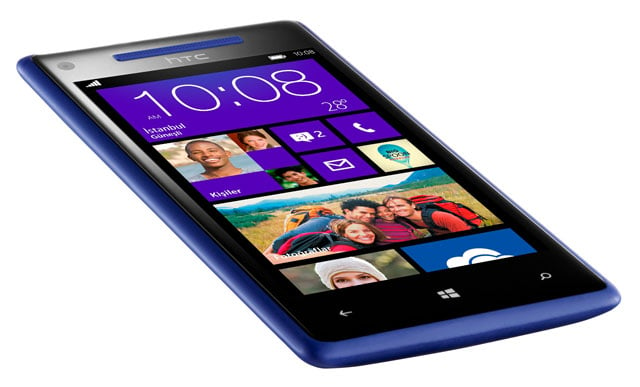 Native Office support, less sandboxed than iOS, not as wild and free as Android - could Windows Phone succeed BlackBerry as the next enterprise phone?

Firstly, there's control. Apple held off for a long time before allowing any sort of central management of its devices. Apple has been long on record admitting that it has little to no focus on the enterprise space. Its release of iOS v4 in mid-2010 saw this change with the launch of Mobile Device Management functionality, possibly to combat the looming threat of the Windows Phone.

But Apple's definition of control is rather different to that of the enterprise expects. Having to buy a third-party application to manage devices they never wanted stings a little. Often-cumbersome processes to enrol devices requiring user input goes against the management and automation enterprise has been chasing for years.

The second main factor is integration. End users expect their technologies to mesh. They expect to be able to take their device (laptop/mobile/tablet/etch a sketch) wherever they want, and have a similar experience to sitting at a PC at their desk, and accessing content. iPhone doesn't play friendly with the other kids here. 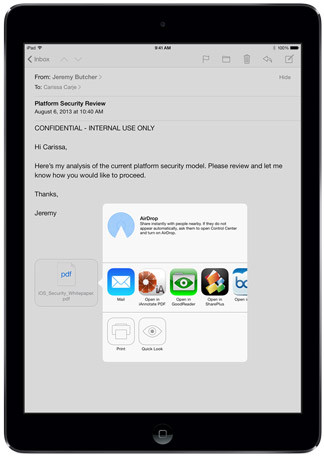 The launch of Mobile Device Management functionality, seen here in iOS7, was possibly a move to see off Windows Phone

Microsoft Office for iOS only came out this year, but this wasn't a showstopper as there were already plenty of third-party Office document readers and editors available. It's the enterprise applications that have had everyone stuck.

Almost every enterprise out there has a virtual bucket full of specialised applications - either third party built and tailored to their particular industry, or internally built by developers. As anyone who's worked with these groups before will know, things move very slowly.

This is usually due to the complexity of copying the existing product to a brand new and very restrictive platform, which in many ways works completely differently than how the product would have been designed. Deploying the application is yet another complicated hurdle to jump: the options being to deployment with Apple's App Store or going down the iOS Developer Enterprise Program path.

On top of this, is it worth the investment in a platform that popped up out of nowhere in only a few years, and could potentially die off again based on nothing more than user appeal (hello Android)? It's a large pill to swallow for everyone involved.

Thirdly, there's iTunes: a product that most sysadmins despise. It doesn't deploy nicely, it doesn't work well behind firewalls, and in so many ways it's designed for a single computer install at home. At least we're beyond the time of requiring iTunes to even activate an iPhone.

This brings us back to the hope placed on Windows Phone 8. We're just over the one-year mark since its release, and it has managed to actually get a slice of the market share (many say at the cost of BlackBerry). Mobile Device Management options are finally starting to catch up to iOS. Windows Phone 8 offers native office support and a slightly less sandbox approach than Apple's vision, while not being the wild west of the Android platform.

Microsoft's big picture is to have one Microsoft Account to rule them all (Windows Phone, Xbox, PC, Tablet) but enterprise isn't really fussed about that, as it adds little to no value. They already have one account to rule them all, which lives in Active Directory. It's generally considered an extra problem to worry about both a domain account and a personal Microsoft account, as that just adds complications in management and support.

Apple and Google have the same issue with their systems: Google's been long pushing their single account to access all manner of Google sites and services, and Apple's going that way with iTunes, iCloud and other online applications.

So, is Windows Phone 8 enterprise-ready? iOS still has the most Mobile Device Management options, which is surprising, but Microsoft's been chasing the consumer angle, something which caused the Apple and then Android dominance in the first place. MDM is a planned afterthought. Whether it's good enough really depends what a company needs. Many enterprises just want the ability to lock down a phone, disable data roaming, wipe a device when required and maybe push some apps or documents to it. In this basic sense, WP8 is ready.

Some much-needed features are finally arriving with the release of General Distribution Release 3 (GDR3) such as the ability to lock screen orientation (so when you're in bed, the screen won't flip sideways) and the ability to actually close off applications rather than rapidly pressing the back button until everything disappears.

There are more "businessy" features on WP8 too - the inbuilt Office apps being the big one, but there are others like driving mode, which locks down the phone while driving for safety reasons.

Not this time, maybe next

The Microsoft Store (Microsoft's answer to the App Store) is one of the biggest complaints you'll hear still about WP8. It's growing rapidly, but it's not the count of applications available that's important, it's the quality. That has been lacking for some time, but finally a lot of the "must have" apps are popping up in the store. Perhaps that's not an enterprise concern directly, but giving an employee a device they're happy to use is very different from forcing them to adopt a device that they perceive as not as good as what they used to have.

What all this means is that Microsoft is finally getting close to the end of playing "catch up" on their OS, so people won't feel crippled changing to it from iOS or Android. That's been the biggest issue so far. Someone who hasn't used a newer generation smartphone much would be happy with WP8. (Moving from BlackBerry is easy for example, apart from getting used to an on screen keyboard.) Now there's also much less for the iOS and Android lovers to complain about.

This was the long play Microsoft was going for and it's looking like they're on track. An uphill battle, but they're heading in the right direction while enterprise eagerly awaits the fully manageable and integrable mobile device. ®