Tape straightens its tie, speeds away from villain's lair: I think I'll die another day

Reports of sales death plunge have been greatly exaggerated

Declines in the sales of tape media are decreasing and the death of tape has now been postponed - indefinitely.

The Santa Clara Consulting Group tracks the tape market on a quarterly basis and its latest release describes what happened in the third 2013 quarter. Total backup tape cartridge sales were $141.73m with LTO format tapes accounting for 95 per cent of that at $134.35m.

HP has a 31 per cent share of the LTO media market, with Fuji in second place and IBM third. 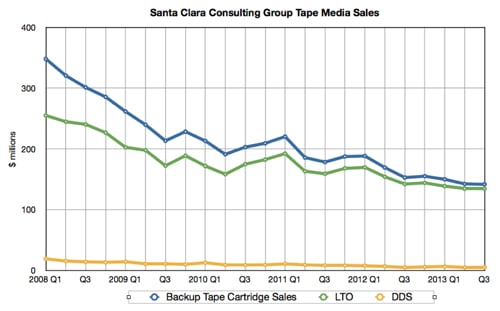 The chart shows that the decline in tape media sales is levelling out at around $140m a quarter. Perhaps, just perhaps, with the rise of archival tape use in the cloud, where its unrivalled cost/GB can blow disk archives out of the water, general use of tape for archiving is now stabilising and may even start rising. That would be a tape turn-up for the books.

who, me? No crypto needed, just a project with a tough deadline that nobody minded missing
Software5 Dec 2022 |

Hosting company has nothing to say on data loss, restore times, or root cause
Security5 Dec 2022 | 2