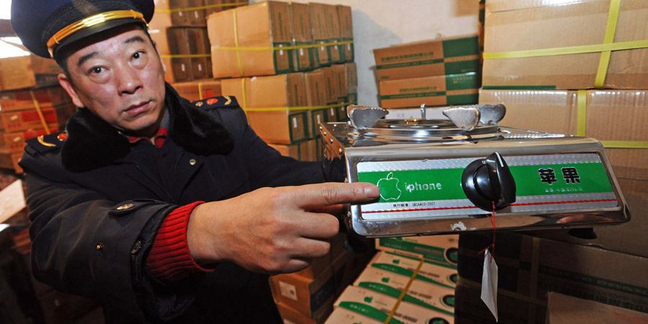 Customs officers and cops across the globe have teamed up to take down over 700 domains selling pirated goods over the busy Thanksgiving holiday sales weekend.

Led by the HSI’s Washington-based National Intellectual Property Rights Coordination Center (IPR Center), the operation claimed 297 domains in the US, 393 in Europol member countries and 16 in Hong Kong, according to ICE.

Acting director John Sandweg claimed that consumers visiting the sites are not only unwittingly buying shoddy knock-offs, but they’re also putting their financial info at risk by handing it over to the criminal gangs behind the sites.

Headphones, mobile phones and other electronics are among the most popular counterfeited goods on the bogus sites which typically pop up on the internet around this time of year to attract holiday season shoppers, said ICE.

“Unfortunately the economic downturn has meant that disposable income has gone down, which may tempt more people to buy products for prices that are too good to be true,” added Europol director Rob Wainwright in a canned statement.

“Consumers should realise that, by buying these products, they risk supporting organised crime.”

ICE said that the IPR Center and its international partners typically collate leads submitted to them by trademark holders before passing them on to law enforcers and customs cops across the globe, including City of London police and Hong Kong Customs and Excise Department.

The domains have apparently been replaced with a notice relating the take-down and educating punters about the dangers of buying pirated goods.

Bigging up its part in the crackdown, ICE said it had seized 2,550 domains in total since it began the operation in June 2010, with the “seizure banner” on captured domains accruing more than 122 million views.

Of course, if the US wants to arrest the global trade in counterfeit goods, it also needs to cut their production off at source, as well as closing down domains selling them in to consumers.

To this end customs officials in China and the States held a month-long “intellectual property rights (IPR) enforcement operation” back in July which resulted in the capture of 240,000 pirated electronics.

This was apparently the first of its kind and US customs officials will need to forge much closer ties with the PRC in future on this kind of thing if it wants to make a lasting impact on global piracy. ®