The European Commission's vice president, who first tabled the plans in January 2011, had been hoping to see her draft bill - which has already undergone around 4,000 amendments - passed before May next year.

But her proposals were stung by a major setback late last week, after the European Council's legal service chief questioned whether its "one-stop shop" measure was lawful, opining that it might breach European citizens' human rights. The measure is supposed to cut red tape for businesses operating across EU countries, giving them one port of call for data-protection issues.

"The problem is the results you get in terms of respecting the functioning of justice and people's rights is actually a very bad outcome, a very bad result and as your legal adviser I have to tell you it's a bad outcome," said the aptly named French lawyer, Hubert Legal, during a council meeting to discuss the processing of personal data in the 28-member bloc, according to the Financial Times.

Reding was quick to attack Legal's opinion, however, by claiming that talks should now be at a "political" rather than "legal" stage.

She said that incidents such as the "sorry saga" experienced by an Austrian student, who was forced to take his privacy case against Facebook to Ireland's data protection authority, would become a thing of the past under the new regulations - if passed in their current form. 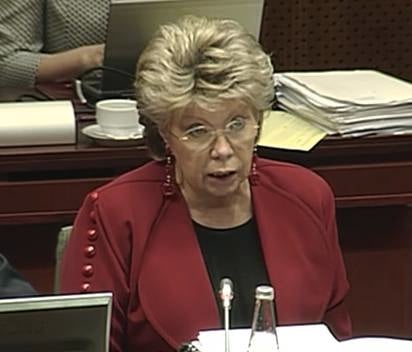 Reding said that current data protection legislation was fragmented, inconsistent and needed to be fixed.

In October, we had reasons to be optimistic: we agreed in principle that a meaningful one-stop shop mechanism is a key building block of our reform. A one-stop shop that is fast, consistent and predictable. A system of enforcement which produces legal certainty, and does not impose costs through unnecessary bureaucracy.

She claimed that "real progress" had taken place in the autumn when MEPs backed Reding's reworked bill, despite some camps - such as the British government - pushing for a delay to the proposals.

In a clear rebuke of Legal's comments, Reding told Eurocrats on Friday:

Since then, instead of moving forwards, we have moved back. Instead of building on our progress in October, the Presidency document we have before us today deconstructs it.

We are effectively reopening questions which had been agreed in October. The questions we have been asked cast doubt on the fundamentals and call into question our central objectives. The one-stop shop would become an empty shell. Bad for citizens and bad for business.

I cannot support this. I have often called on the Council to move forward on this file quickly. But not at any cost. I want a meaningful reform, and this has to include a meaningful one-stop shop.

In my view we should therefore return to where we stood in October. Simplify rather than complicate the discussion. Take stock and move ahead aware of our objectives.

Reding accused the council of "going round and round in circles" by returning to issues that she insisted had been deeply scrutinised over many months since her draft bill was first tabled. Her EC counsel, meanwhile, disagreed with Legal and said that the one-stop shop measure fully complied with EU citizens' fundamental human rights. ®