The test systems were better in other ways, too. “We also showed dramatic reductions in power consumption - in some scenarios as much as 70 per cent – and in some scenarios a 50 per cent capital expenditure reduction,” Clarke claims. “The flexibility and potential for service acceleration is unprecedented when you move into a software environment.”

Crucially, for Clarke, the research programme demonstrated that NFV was not merely an alternative to the current approach – it was the way forward for BT, and if for BT then for the world’s other telcos too.

He’s unequivocal about what the research work revealed. “Effectively what I’m saying is, that the ways in which we design and architect telecommunications networks using bespoke hardware appliances are now obsolete. That’s what we have discovered. We can virtualise network functions, download them as software and put them on industry standard servers.”

For Clarke, the case for NFV had been made. More research work would be needed to tune the details, but what was required most was an effort to establish an open ecosystem. Right from the start, Clarke realised this wasn’t something BT could - or should - do on it own.

To take the fullest possible advantage of NFV, the industry needed a common framework on which operators, hardware and software suppliers, and other service providers partners could begin to build and implement NFV.

“That takes standards,” he says, “but standards take a long time to be agreed. So rather than embark on a standards process, the idea gelled in my mind that we should get a collaboration process going among the operators.”

He had two goals: first, to encourage telcos to share what they were learning from their own NFV research into the complexities of implementing networks in data centre environments and, second, to devise common approaches for at least some of the technical challenges.

“If we get common approaches and find common requirements, we can begin to get a common message to the industry and start to get the industry solving those challenges for us,” he says. 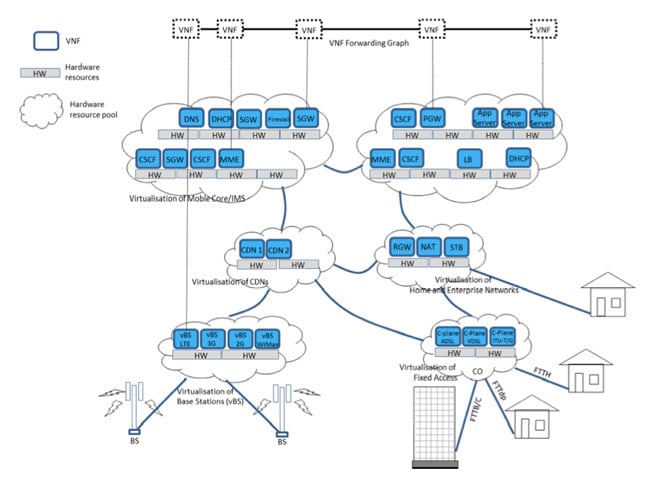 A fair few of Clarke’s opposite numbers at rival top-tier operators agreed. Twelve of them from Europe, the US and Asia, along with BT itself, made their intentions plain in a white paper published just over a year ago, in October 2012, the result of the informal discussions Clarke had initiated earlier that year. They formed the NFV ISG (Industry Specification Group) under the European standards agency, ETSI.

The paper was those 13 operators’ way of making clear to the technology industry that they all believe NFV is the way they can expand network performance, reach and capabilities more cost-effectively than has ever been possible before, and that they are all committed to this approach.

“Networks built out of bespoke appliances is the old way,” says Clarke. “The new way is networks built in data centre environments, and that is a significant shift which will dramatically change the supply chain and the operating environment in telecommunications operators over the next two to five years.”

A year on, in October 2013, the original 13, by now joined by 12 other operators and service providers, among them Cable Labs representing the entire cable TV industry - Cable Labs maintains the DOCSIS cable modem standard, for example - restated their aims and their vision in a second white paper. It defined the roadmap they want to follow to have that vision realised.

This is not, Clarke stresses, an exercise in setting standards. The group’s definitions of terminology and use-case scenarios have been put in place to ensure telcos, and the software and hardware vendors who supply them, are talking the same language. The end result of the process laid down in the roadmap will be a framework which tells vendors exactly what telcos want to achieve: in what roles NFV kit will first be used, and how the technique’s use can then be extended. Then it will be up to the vendors to come up with products that meet their needs.

“NFV didn’t exist as a concept or a technology, though it was implied in many of the things the cloud industry were doing,” says Clarke. “So we had to design a new terminology. That’s needed because the whole point is not to develop standards, it’s to get the whole industry lined up behind a common endeavour to innovate and solve challenges, and that includes being able to talk the same language.”

This initial definition work isn’t exhaustive, he admits. No one can say what new applications NFV might prompt or make possible. “Who could have forecast SMS would be so successful when some engineer decided he was going to use 128 bits to make a general-purpose text transmission platform? It was unknown at that time what that would grow into. We can’t predict what kind of network innovations will arise if you virtualise networks in data centre environments.”

Don't have the budget or customer base for Graviton-class silicon? Intel thinks it can help
Systems13 Aug 2022 | 19