Hardware companies are already taking their first steps toward finding out how NFV may change what networks can do. Nokia Siemens Networks (NSN), for example, is developing a server blade module that slots into its base-station hardware to run applications. It’s currently running trials of the kit with South Korea Telecom.

Lindemeier’s team has focused on apps that can improve the user experience, and the trials have shown very positive results, he says. “By placing certain functions or content at the edge of the network, throughout has been improved by 100 per cent, in part due to the flawless TCP behaviour - we’re transmitting data without loss. We’ve seen quite dramatic latency reduction too. That’s a very important metric for service and application providers – latency reduction can be translated directly to money.”

This is what NSN calls “mobile edge computing” - putting intelligence at the edge of the network where it’s more readily available to process data and send back results than would be the case if everything had go right back down the line to centralised compute facilities.

And it works. “Basestation programmability is a reality. We have implemented certain functionality on the base-station within weeks. Had we taken this functionality through 3GPP and the corresponding standardisation and implementation processes it would have taken us much, much longer.

Intelligence at the edge

“Contextualisation is a reality. We have done it with a set of parameters that we extracted from the base-station and used with certain applications and it’s working in real time. So much data is sitting in the basestation but by the time it has been forwarded to some central analytics system, it would be out of date already. Basestation data changes at a millisecond level. You can’t expose information that is valid for a millisecond to any central analytical system. Either you process it directly on the spot, or you don’t process it al all.”

This is just a first step,, says Clarke. He envisages a dynamic base- station able to adapt to changing patterns of demand over a 24-hour period by downloading network functionality as software as it’s needed and replacing it with different functional modes when it’s not.

Think about the Japanese earthquake of 2012, he says. Japan’s voice network couldn’t cope with the sudden surge in usage as everyone began calling everyone else to see if they were unhurt. But NTT DoCoMo’s content delivery-centric data network stayed up. Imagine being able to download that entire content network’s hardware with voice traffic management functionality and using it to expand the networks’ voice capacity, all without the need to send out a single engineer. 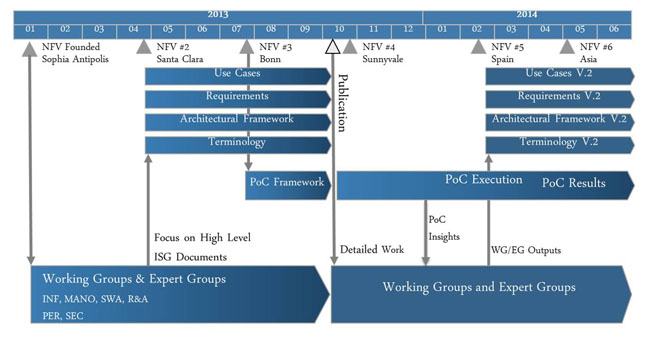 That’s the goal for NFV: to use not only the low-cost of standard servers to expand networks more cheaply or more extensive for the same budget, but to take advantage of the architecture’s flexibility to support different workloads, potentially at the flick of a switch.

But there’s still plenty of work to do to establish the ground rules. “We have set ourselves the target of having the work done by the end of 2014,” says Clarke. “This is where we differ from the standards body: we are not standardising, we are trying to give the industry as clear a picture of where we want to go as possible and then we want to hand over to the vendors who will supply us with the solutions to take forward the innovation - this is not about the telcos doing the innovation, or competing with the IT industry.”

On the contrary, it’s a major opportunity for the computer business, he says. “If you’re a small ISV who wants to sell your network application to the whole global industry, the chances are you’ve not got the resources to go and talk to 30-40 telcos. The NFV ISG’s work provides enough guidance for that ISV to know the big picture as to what these telcos think is the future.” The result: the ISV can produce generic foundations sure in the knowledge that it supports most if not all of the goals telcos want to achieve.

And it’s not just for the benefit of commercial developers. The NFV ISG’s work also embraces the open source community. “We recognise important open source communities that will be relevant to this space, for instance OpenStack, Apache CloudStack and the Linux Foundation’s OpenDaylight software-defined networking project - a number of those are going to be important.”

With the publication of the second NFV ISG white paper, the first five specification documents were released too. “These initial specifications have been developed in record time: under ten months of intensive work,” boasts NFV ISG chairman Prodip Sen. They take in use cases, telco requirements, the architectural framework, terminology and a framework for co-ordinating and promoting public demonstrations of proof-of-concept platforms.

According to the ISG, early NFV deployments are already under way and are expected to accelerate during the next two years. More detailed specifications are scheduled to be published in 2014.

NFV will change the network, and enable so many of the products and services the technology industry is already starting to build.