But don't worry, there's still two others coming in spring 2014

Its sequential read/write performance will be 2.8/1.7GB/sec and its random read/write performance 450,000/40,000 IOPS, again with 4K blocks. Yes, we did re-check the IOPS numbers, with their enormous skewing for reads. The endurance is stated to be up to 374TB. With a 2TB product that’s 187 full drive writes. If you aren't careful with the write load, this thing could be finished before 7 months is up, at a 1 full write/day rate.

Intel SSD roadmap for 2014. Click this tiny chart to get a bigger version.

Compared to the DC P3700 the DC P3500 is more than double the max capacity, has blazing fast random reads but crap random writes.

The Intel slide says the both DC P3000 series products have consistent, native PCIe-performance, 5X throughput over a SATA interface, and the lowest-latency storage interface. Both also have end-to-end data protection, power-loss data protection and AES 256b encryption.

There are more details on the Myce-sourced slide below: 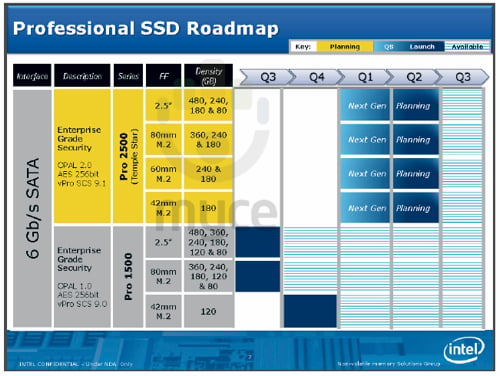 With Intel sharing Micron fab output with Micron we can expect upgraded SSDs from Micron to show themselves in the next few months. ®