Geek's Guide to Britain The UK’s National Archives in Kew have enough gems and hidden secrets to keep Indiana Jones or Robert Langdon in sequels for the next couple of centuries, with everything from the Domesday book to the UK’s official UFO records socked away safely in its sanctum.

But for the swashbuckling archaeological hero of the future, whips, guns, and medieval symbolism will not be enough to unlock all of Kew’s secrets. They will also need the ability to manipulate a tape library and emulate long-dead file formats.

That’s because over the next couple of decades, the expansion of the UK’s official national memory will no longer consist of handwritten vellum-based documents and lovingly typed Cabinet meeting minutes in buff-coloured folders. Rather, with government business increasingly being conducted electronically, the National Archives will also expand virtually, one cartridge at a time.

As the national memory of Britain, the National Archives is a comparatively recent invention. For centuries, official documents, crucially the statutes passed by Parliament and the judicial decisions that defined the UK’s common law, were dispersed across bundles and trunks at sites including the Tower of London and the Palace of Westminster. Other key documents were in private hands.

A little history of a lot of history

Things became more systematic with the creation of the Public Records Office in the early 19th century. This was long headquartered in a soaring Victorian Gothic building on Chancery Lane, though procedures were occasionally subject to the whim of individual “keepers”.

The Grigg report of the 1950s laid down a new mission and methodology for choosing which documents should be preserved, including the 30-year rule*. This new modern approach to document-keeping clearly required a new modern building for the documents.

The Ministry of Works, in its wisdom, chose a site in Kew: a WWI era hospital, which already housed the government’s National Savings and Investments operation. The deeds of the historic few won out out over the chances of riches for the modern hoi polloi, and ERNIE (Electronic Random Number Indicator Equipment - the machine that generates the winning Bond numbers each month) and the National Savings Institute staff were shunted off to Blackpool. The new PRO building was opened in 1977.

Kew gained The National Archives moniker in 2003 after the PRO was merged with other record-keeping organisations including the Historical Manuscripts Commission. The current site comprises the original PRO building, a fine example of '70s municipal brutalism designed by the Ministry of Public Works, and a newer, lighter annexe.

The original building is saved from looking like a 1980s dole office or job centre by being skinned in light-coloured concrete, rather than the shit-coloured pebble-dash of so many of its contemporary government buildings. It is linked to the new building by a light-filled atrium/reception. With the enormous water feature out front and the leafy riverside location, it really is a nice place to visit. You’re as likely to be run over by a bunch of over-excited schoolkids as hordes of tweedy encased researchers. 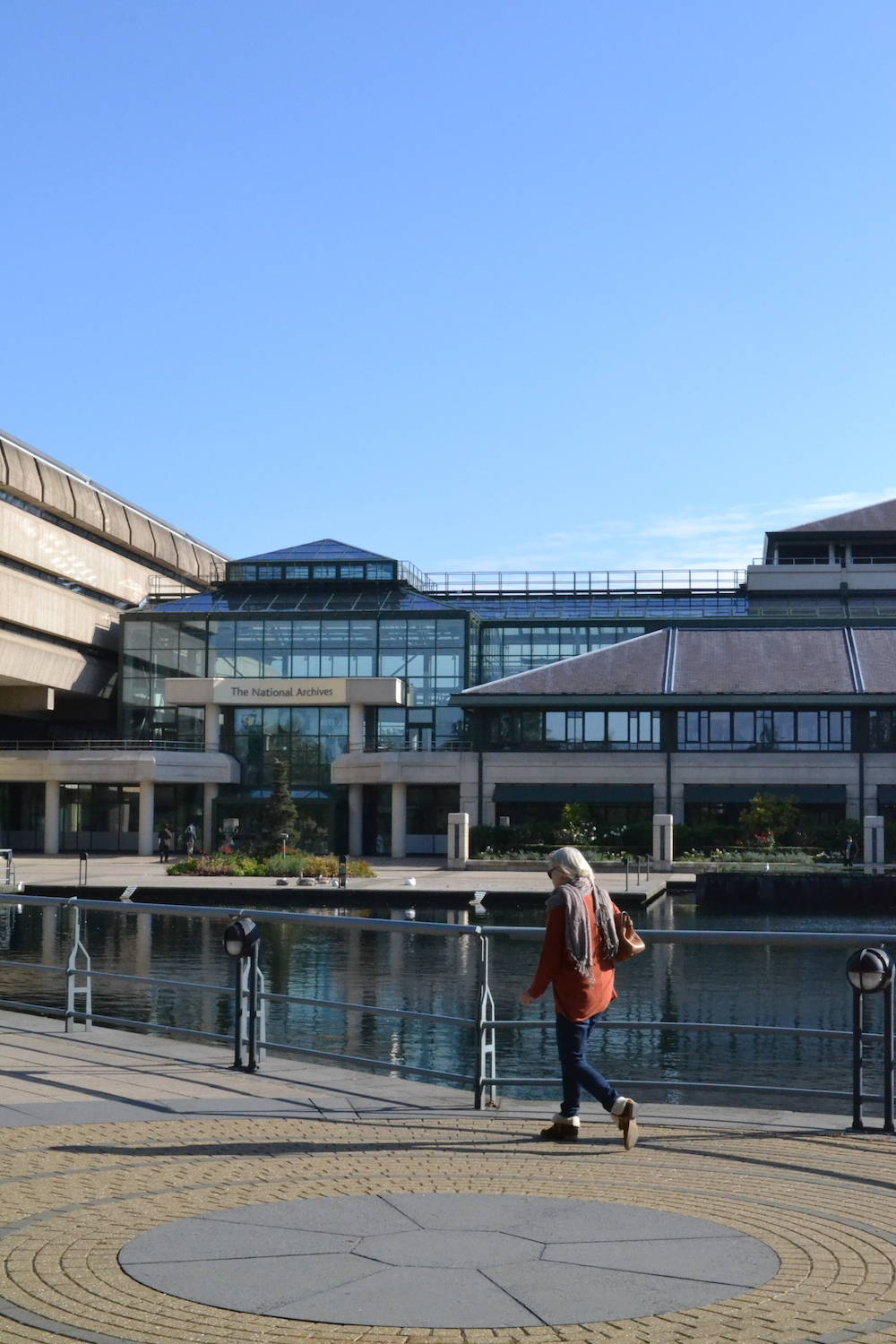 To reach the dark archive, first cross the water

Despite the name change, the operative word is still “public”. Anyone can walk into the lobby, veer left and hit the small museum covering some of the key items in the collection, including the Domesday book, or head upstairs to the public reading rooms, where you can consult records online or on microfiche. Register for a “readers' ticket” and you can request original documents.

Beyond the museum is the inevitable bookshop and a canteen, also public. When we visited there was chocolate bread-and-butter pudding on the menu, and the BBC’s favourite current favourite historian Lucy Worsley signing books in the bookshop. You might not be so lucky when you visit. Sometimes it’s rhubarb crumble.

After tea in the canteen with CIO David Thomas, we were taken into the newer wing, the domain of the archivists, web and database developers, historians and restorers who maintain the collection, and ensure that it is available to the people who pay for it - ie, you.

The new wing has a long light-filled atrium, which is lined with framed photographs. On closer inspection these prove to be the staff’s own work: holiday landscapes, wildlife, still lifes. Dotted amongst these are also lots of posters for yoga and meditation classes. They must work. The people we met there seemed engaged in their work, but not unduly stressed. The archive has been a thousand years in the making, so perhaps that gives you a slightly different perspective on time.

It possibly also helps that the site - or at least the repositories where the documents are kept - is literally bombproof. Fire safety is also paramount, with suppressant gas on tap rather than water. And unsurprisingly, the site is built to withstand floods, reassuring given its Thames-side location.

As you approach the repositories themselves - the actual document storage areas - you are gently reminded that these are pencil-only areas. Got that? No pens, no food, no drink. No smoking too? Need you ask.