LINPACK win wasn't a record – but commodity iron a bargain at $4.99 per GFLOP

NUDT’s LINPACK win isn’t a surprise to competition observers, the team hails from the home of Tianhe-1 and Tianhe-2, meaning they know their way around their GPU-heavy cluster. They also have a bit of a reputation as LINPACK specialists, having won this award in previous competitions.

Team Germany, FAU (Friedrich-Alexander University) grabbed second place with a score of 7.413 TFLOP/s. The Germans (or Team Kraut, as they dubbed themselves) had an equal number of Kepler GPUs as NUDT (8 total), but had only half the memory, at 512GB, as the victorious Chinese.

The reconstituted all-female Team Venus 2.0 nailed down a third place finish in LINPACK with a score of 7.225 TFLOP/s. This is a vast increase (more than 3x) vs. their score and middle of the pack finish at SC12 last year. Nice work, that.

No New LINPACK Record at SC13

For the first time since 2009, we didn’t see a new student LINPACK record set during the competition. In fact, we took a couple of baby steps backwards. 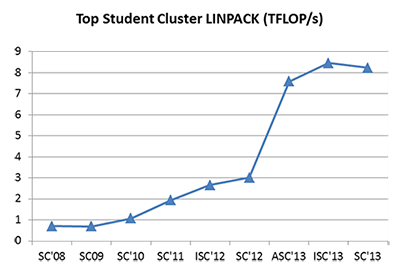 The winning NUDT SC13 score of 8.224 TF would have netted them a third place finish at June’s ISC’13 cluster challenge, behind Huazhong U’s 8.455 TFLOP/s and the 8.321 TF/s turned in by Edinburgh University.

The major reason why we didn’t see a new LINPACK high water mark are mostly due to teams using the same accelerators (GPUs in this case) as they used in the ISC’13 competition several months back. GPUs have been the main driver behind the explosive increase in cluster competition LINPACK scores since 2010.

On the Commodity side of the tracks (where students could only spend $2,500 on their cluster), the LINPACK competition has been translated into a lowest cost per GFLOP. The results were incredibly close, with only two cents difference between the top two teams. 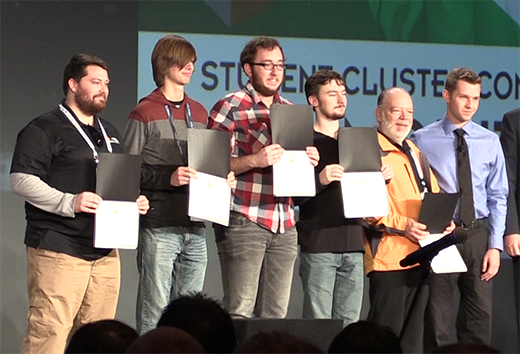 Team Sun Devil (Arizona State University) topped, or rather, bottomed, the other competitors with a cost/GFLOP of $4.99.

In a heartbreakingly close second place was Team Rock from Slippery Rock University. Their cost per GFLOP was $5.01. Based on their total system cost of $2,379.00, their LINPACK score was 474.85 per GFLOP/s.

If Team Rock had spent just $14.25 less on their system, they would have won this award with a score of $4.98 per GFLOP.

What is disappointing to me is that both of these systems, along with the rest of those in the commodity track field, beat any of my systems on a dollar per GFLOP/s basis. In a 2012 HPC blog, I compared historic HPC systems to commonly used PCs (well, commonly used around my house).

My wife’s generic desktop won this competition with a score of $.085 per MFLOP/s ($85 per GFLOP/s). She, and her system, have now been dramatically and resoundingly unseated by the SC13 commodity track competitors. If she cared even a tiny bit, this would be crushing news indeed. It would also probably justify refreshing her current crappy machine with a shiny new, but equally crappy, system. Good thing she doesn’t read these blogs, eh? ®