Want smut, sir? You'll have to be on our pervert list

BT has flicked the switch on its promised network-level filter system in a move to swerve regulatory meddling from Whitehall.

Next year, it will nag existing customers to make a choice about what content they want access to via BT's broadband network.

The system will censor clumps of the web - such as pornography and self-harm sites - from the prying eyes of youngsters.

Just like BSkyB and TalkTalk before it, the telecoms giant is now pre-selecting the website blocker for all new subscribers. Users will be faced with this dialogue box on set-up: 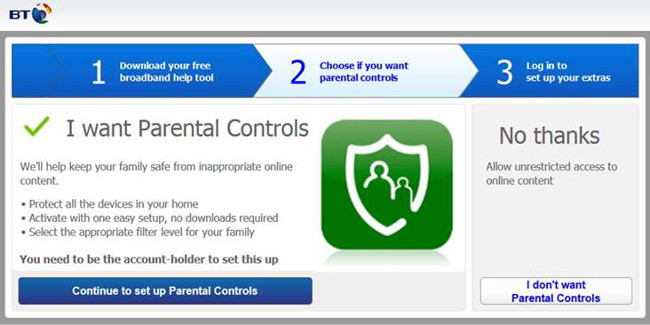 But the filter is not just limited to households with small kids. Brits across the country will be forced to opt out of blocking sites that some conservative and over-sensitive types - including Prime Minister David Cameron - might consider to be controversial.

BT revealed publicly for the first time to The Register in May that it was developing a network-level blocker using DNS lookup technology.

We've asked the company for technical details about the system being used, but it had not got back to us with comment at the time of writing.

It's also unclear if the tech was built completely in-house or with the help of a third party such as Huawei, which worked on TalkTalk's Homesafe filtering system. That arrived way ahead of the pack back in 2011, when the likes of BSkyB and BT were pooh-poohing the idea of intrusive, nanny-ish network-level filters.

BT said its Parental Controls blocking system would cover all internet connected devices in the home.

New customers will have to make a choice on whether or not to activate the parental controls when setting up their internet connection for the first time. The option of having the controls implemented is pre-selected and customers have to confirm that choice or actively choose not to switch on the controls which block content potentially unsuitable for children.

BT will be contacting all of its existing consumer customers during 2014 so that they then have to make a decision on whether or not to set up the controls.

The one-time national telco has applied different levels of control to its system: "strict", "moderate" and "light". BT said that subscribers could use the default settings or police the content themselves by adding websites to a block list on the service.

It said that the filter can be time-specific, such as "homework" or "watershed" - a term normally linked to when UK television programming switches from family broadcasts to more adult-targeted content.

And – like BSkyB's Broadband Shield that rocked up in November – BT said that customers would know if any unauthorised changes are made to the Parental Controls system.

"The account holder’s credentials are required to set up and change any of the settings (filter levels, filter times, switching on and off and adding or removing blocked or allowed sites). For additional peace of mind, each change results in a confirmation email being sent to the adult account holder to advise them of the change," it said.

BT added that its network-level filters would not offer children complete protection from the big, bad online world. It should surprise nobody that parents need to do their bit, too.

Meanwhile, it's likely that Virgin Media will unveil its DNS lookup-based blocking system before the year is out.

The Conservative-led government, keen to satisfy its core Middle England voters, has warned Britain's ISPs that regulatory intervention could happen if they fail to do their bit in helping to protect kids online – even if some of those children know only too well how to dodge such a system. ®