How Britain could have invented the iPhone: And how the Quangocracy cocked it up

Inventor screwed - while taxpayers sent a clown on holiday

Send in the Clowns

Was Nesta truly committed? The sum seemed paltry compared to some other grants the outfit was dishing out.

In 2003 the press reported that Angela de Castro, a Brazilian-born clown, had won £39,200 for a study to “evolve her clowning expertise and look deeply into what clowning has to offer contemporary society”, according to Nesta. That cash also covered travel expenses so the performer could learn from “master clowns” around the world.

Requests for jaunts were favourably received. Later it would emerge that Nesta spent over £1m on “dream time fellowships”, which encouraged artists to take a year off to "explore". According to a 2005 Sunday Times report (behind paywall), one received £27,500 to monitor her moods and compare them to phases of the Moon. A magician received £36,890 grant to travel to Las Vegas to see another magician perform at the Sahara hotel and casino ("Lotto pays out £1m in grants to mood watchers" – by Maurice Chittenden and Holly Watt, Sunday Times, 19 June 2005).

Nesta’s apparent frivolity didn’t stop there. The Lottery Act that had created the outfit urged it to protect an individual’s intellectual property (IP). Yet, astonishingly, even before Nesta had signed a contract with Fentem, we're told it published the details about his work on its website, alerting competitors. Nesta, meanwhile, maintained it had provided a "one-line description of his project published in a bulletin without his approval, but denied that any intellectual property rights had been infringed by [the] disclosure".

The quango would later admit that it didn’t recruit “intellectual property practitioners” as a matter of policy - but instead would “obtain IP advice to inform our processes ... by engaging relevant experts as the need arises”.

The clock continued to tick, and in April 2004, Fentem wrote to Nesta, impressing upon them the need to unlock sufficient funding for the project.

“My project is positioned both literally and metaphorically on the periphery of the computer industry, and industry that is fast moving and high risk, but at the same time offers huge rewards. The investor needs to act quickly and decisively,” he urged the organisation.

“Since I applied to Nesta for funding, companies such as Sony have started to turn their intense beam of their R&D division’s searchlight onto the kinds of technologies I have been developing.”

Fentem proposed approaching Apple and Sony with his technology that very month.

Nesta had introduced Fentem to a potential manufacturing partner, electronic music equipment maker Novation EMS. But Novation EMS was going bust. In June 2004, it had entered administration and by August, its assets were gobbled up by Focusrite. In a later PwC report, the investigator contends that the company "had demonstrated a weak balance sheet from the start", requiring cash to be paid to them directly for the development, indicating they may have had a short-term cash problem".

Fentem was now in a bind: In his view, Nesta had alerted competitors to his innovative multitouch work, but its foot-dragging had led him down a costly dead end. The quango refused to release any more money until he found a new "development partner".

"Bear I mind I had been given just £20,000. I had done an extraordinary amount for so little money."

As to looking for a development partner to "unlock the funds" for "development", Fentem said: "We thought we'd made a lot of progress on development. They said money hadn't been released because some arbitrary milestones hadn't been reached."

In an internal review conducted in December 2004 which The Register has seen, Nesta itself conceded that "milestone" requirements [were] not set out sufficiently clearly in the contract to provide certainty on when they have been met." It continued: "Milestone renegotiation issues can only be resolved through discussion between awardee and programme staff...to identify a way forward."

But Nesta and Fentem could not reach an agreement. He told us: "They wouldn't acknowledge that they'd wasted such an enormous amount of my time."

To add insult to injury, Nesta continued to claim publicly it had invested £100,000 in his multi-touch screen tech. 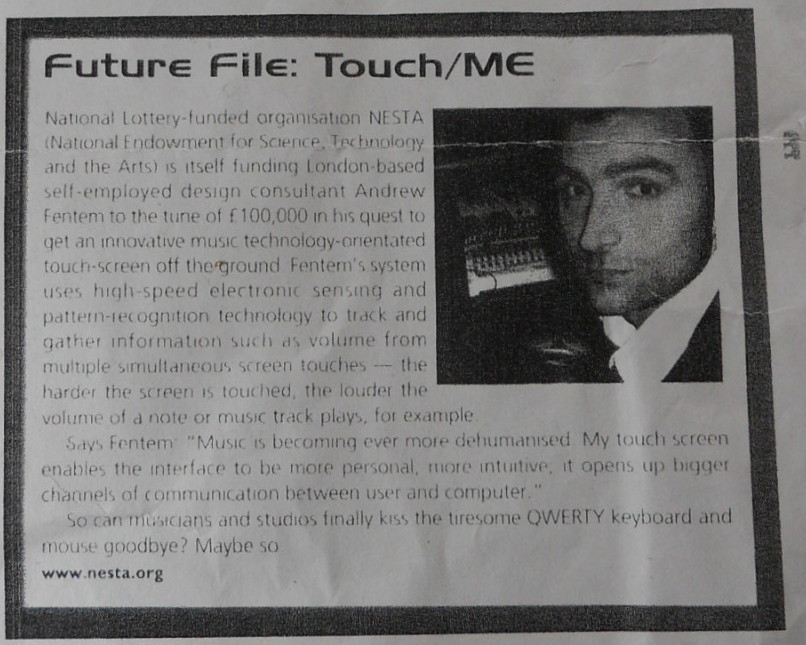 Fentem demanded an explanation, and eventually this triggered a formal investigation by PriceWaterhouseCoopers.

China's clampdown on Tor pushes its hackers into foreign backyards

Beware the three-finger-salute, or 'How I Got The Keys To The Kingdom'