A family heirloom in the making

Cache in the Attic If you're lucky, old gear doesn't so much die as get given away or retired. Indeed, some kit is just too quirky to dispose of, even though it gets wheezy whenever you fire up a browser. Forget computing with it though, says Andrew Orlowski, the value can lie elsewhere.

Why keep an Apple G4 Cube in the attic? It's not for what it can do, for sure. Today, a £60 laptop from eBay, spruced up a £10 Firewire card, can do almost everything the Cube can. No, the reason I keep one safely wrapped up isn't rational. But it's the same reason people buy and lovingly maintain their DeLorean DMC-12s. The Cube was simply an outlandish, insane design, a one-off. I once speculated it began life when "a millionaire had given a mad bloke on a bus an unlimited budget:

"Hello. You look like you've done a lot of LSD. Well, here's several million dollars - go and design a computer, any shape you want. Just make sure it hangs upside down." 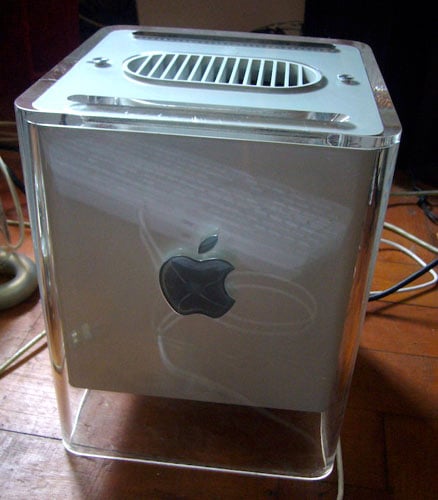 Hip to be square: Apple's G4 Cube was certainly iconic and inevitably expensive

And that's not far off. The Cube was a computer that looked like Buckminster Fuller talked. It was very much a product of a strange man in a strange time: the first dot.com era, when fabulous wealth could be conjured from nothing, and a new "long boom" of limitless wealth was upon us, we were told. I described my infatuation with it back here at some length.

It was only fairly recently - well, less than five years ago - that it was reluctantly packed away. It had been running 10.4 Tiger well, and doing a passable job as an iTunes player via Firewire and a Yamaha Firewire sound card box, attached to the living room hi-fi. Not long before that, a souped-up Cube was my desk machine at the office. But all good things come to an end. The bandwidth limitations of the Cube bus, running at a fraction of the speed of the CPU, and its sheer bulk in a small flat, meant it had to be retired. ®