Unmistakably retro and loosely based on the 1955 Philetta (BF 102 U), the Philips ORT2300 is eye-catching from the moment you take it out of the box. It looks like it might have started out as a white plastic casing at the beginning of its life but has sat on top of the fridge in a smoky transport café for two decades and soaked up its share of the atmosphere to produce its yellowing appearance.

Apart from a dual function volume/power knob at the front, all the controls are on the top of this DAB/FM /Bluetooth radio. The thinking here is it’ll be used by the bedside and lazy fumbles across the top will suffice in finding the sleep bar and other functions such as the two alarms as well as station, presets and source switching. It’s just a shame that Philips have graced the front of it with an intense blue power indicator LED that’ll surely be a distraction when the lights are out. 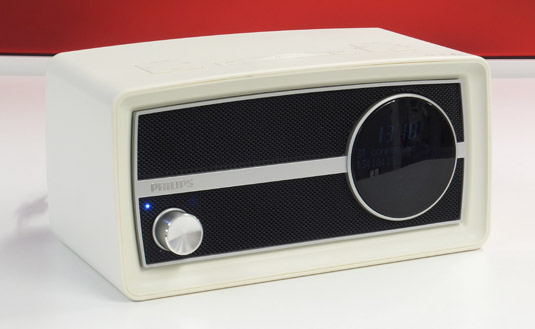 Retro styling but not a valve in sight

At least the main LCD has dimming options and besides the time, shows station information and the current mode. The various modes appear in different places on the display, as if it were a dial, adding another retro element. A nice touch is the Bluetooth pairing momentarily shows the name of the device on the display when the connection has been established. Philips goes a step further offering the Philips DigitalRadio app on Android and iOS that taps into the functionality of the radio and enables remote control from your mobile device – so it’s a two way street of sorts.

On iTunes, the Philips DigitalRadio app doesn’t get great review, as it seems the folk trying it out don’t have a suitable Philips product to match it to. So I gave it a shot and was immediately impressed. Whilst testing it was updated too and now notifies users of any compatibility issues.

All sources can be controlled, including the volume of the Aux input round the back. Volume level changes using the front a panel knob are reflected in the app too and when playing audio using Bluetooth, the song title appears on the radio front panel display. You can even tune the FM radio from the app and there’s a listing of DAB radio stations to scroll through and choose from, as well enabling configuration and selection of your presets.

Sonically, the Philips ORT2300 can get quite loud without any major distortion issues and although it lacks much in the way of bass boom, it has enough range to be comfortable listening for music playback. That said, there's no headphone or line out here, so you're stuck with the built-in mono speaker, as it can't be hooked up to a hi-fi either. 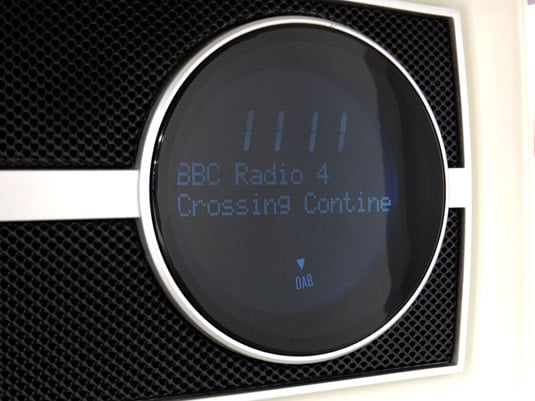 Admittedly, not everyone will thrill to its appearance and deliberate plastic styling, but there’s more than looks to this radio, especially if you load up the free DigitalRadio app, and for bedside use, there’s a USB socket at the back that’s designed specifically for charging devices. All in all, its Bluetooth use is very well thought out, but it's a pity the Philips Original isn't a bit cheaper given the alternatives at this price.

Bluetooth appears to have covered the Pure range like a rash over this last year, first showing itself on its Jongo portable speakers and now joining the forces with its DAB and Wi-Fi radios. Indeed, the Evoke D2 can be bought as just a standalone DAB/FM radio for £85 but pay another £15 and you get the addition of Bluetooth functionality.

Pure’s penchant for styling hasn’t always blended well with the user experience, often requiring a fair share of prods and twirls to gain satisfaction. Indeed, enabling Bluetooth does involve a bit of this too, but on the whole the Evoke D2 hits the right balance. With a few presses of the Source button you can be hooked up to Bluetooth, the display simply showing whether a track is playing or paused. 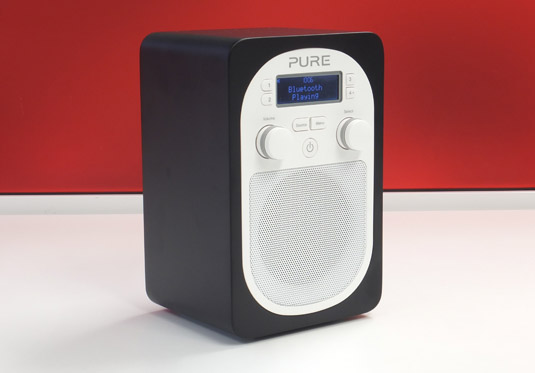 Four dedicated preset buttons on the front panel simplify station preferences with the fourth button offering scrolling to a total of ten preset channels. There’s not much else to see, but press the Menu button and you can scroll through various alarms and timers, bass and treble tweaks and various submenus for display preferences, firmware upgrading and the like.

Round the back is a micro USB socket reserved for upgrading along with an aux input and headphone output – the latter having to double as a line out if used with a hi-fi setup, which isn’t ideally matched but will work. There’s a sizeable speaker port here too and a panel that hides the battery chamber for the proprietary B1 ChargePAK that’ll set you back around £28.

The DAB reception proved top notch although the same couldn’t be said for the FM side of things. The Seek function seemingly tuning into noise rather than a proper station. Admittedly office tech interference didn’t help here, but sorting out the wheat from the chaff is what you’d hope the scanning process would achieve. Still, there is manual tuning if all else fails. 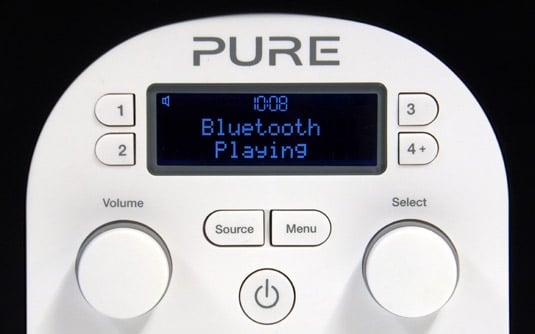 No snooze button to slap here, but it does feature alarms and timers aplenty

The D2 does sound good though, albeit not the loudest nor the warmest. However the output is very well contained seemingly working within the limits of the speaker by not challenging it with a level of amplification or lower bass frequencies that it can’t handle. That said the tone controls do make a significant difference, if you feel the need to warm or brighten things up. As DAB/FM/Bluetooth radios go, it’s a sensible choice, sitting pretty on a bookshelf, bedside or even on top of the fridge and Pure has just announced Glacer white versions of the D2 and D4 Bluetooth models, if Domino black doesn't appeal.