China's Apple wannabe invites you to slip on the anti-static gloves this Christmas...

What do you get for the geek who has everything this Christmas? Well, if you’re in China and you have 1 yuan (10p) to spare, Xiaomi has just launched in beta a self-assembly smart Wi-Fi router with a 1TB hard drive.

Announced by former Android product manager Hugo Barra in a Google+ post on Monday (h/t TechInAsia), the new Mi Wi-Fi router is initially being shipped only to the first 500 users who were quick enough to put in an order last week.

The Mi Wi-Fi 802.11ac router comes disassembled in a wooden box, complete with anti-static gloves and a screwdriver. According to Barra, it embodies “the Christmas hacker spirit”. Ho, ho, ho. 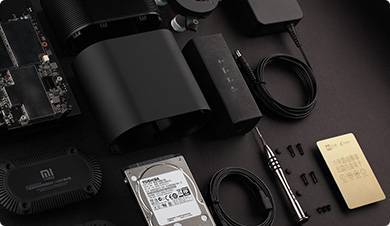 Once you piece it all together, you’ll find a Broadcom 4709 1GHz dual core processor; 256MB DDR3 RAM; and that 1TB SATA hard drive for storing thousands of movies and songs.

There’s even a cooling fan, with Xiaomi claiming the processor’s performance is too powerful to do without one.

The smart router also supports NFC, includes back-up software from Kingsoft and, of course, access to the Xiaomi app store.

As a piece of pre-Christmas eye candy the DIY Mi Wi-Fi box will certainly having Xiaomi’s legion fanbois and girls in raptures.

They will be eagerly awaiting the next, no doubt limited, round of sales, but there’s still no firm date on when the firm is expanding sales outside of Greater China.

That day will happen sooner or later, however, with the firm’s hiring of Barra a key indicator of its global aspirations, to cash in on Middle Kingdom fervour for its products that has seen some commentators suggest the company is the closest thing to Apple one can find beyond Cupertino. ®