Merry Christmas? Not for app devs: That gold rush is officially OVER 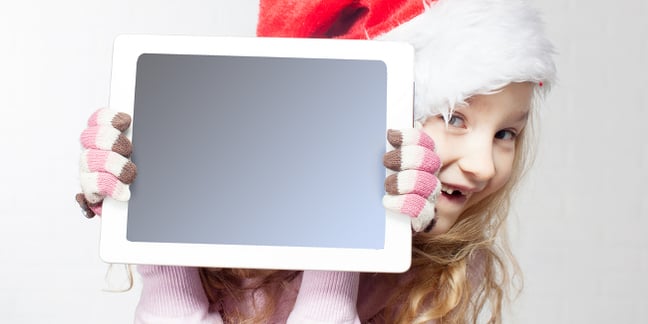 This Christmas was nothing but bad news for developers hoping to cash in on fast-selling tablets, if download and activation stats from the festive season are to be believed.

Retailers and manufacturers have yet to say how many devices they unloaded on touch-happy seasonal shoppers, but app authors should be worried. A record number of apps were downloaded to smart devices unwrapped this Christmas but overall download numbers have crashed, according to mobile stats firm Flurry.

App downloads during the week between Christmas and New Year jumped by 91 per cent compared to the first three weeks of December.

But compared to Christmases past, downloads grew by just a quarter.

The number of apps downloaded increased by just 25 per cent year on year, versus 90 per cent and 97 per cent for the two Christmases before.

Flurry did not provide exact numbers or give app titles, but said it tracked 400,000 apps.

Games provide the most popular downloads, followed by social, media and lifecycle apps. Flurry reckoned consumers have grown more discerning in the apps they install. Those on their second, third or fourth device are using what they know or trust.

“The gold rush days of the huge jumps in the overall size of the connected device installed based, followed by a dizzying rush of app downloads are fading,” director of industry insights and analysis Mary Ellen Gordon blogged.

“The successful developers in 2014 and beyond will be those who put in the hard work of identifying a target group of users, of creating apps that work well for them, and continually refining and reinventing mobile experiences to profitably retain those users,” added Gordon.

That means more pressure on start-ups whose preferred method of business has been “build app, attract millions of users, get bought by Google or Facebook.”

The gold rush is also disappearing from tablets, too. The number of devices activated during the Christmas week grew 63 per cent compared to the first three weeks of December.

Amazon’s Kindle slab saw the most growth, rather than the usual suspects pitching Google’s Android or Apple with its iPad.

Kindle activations grew by nearly a quarter over the first three weeks of December, a long way ahead of Acer (in second place) followed by Apple and Samsung.

But the Christmas 2013 activation bump was far smaller than previous Christmases, with even mighty Amazon hurting.

Kindle activations were at their highest two years ago 2011, up forty-one times their normal activation for the Christmas week of 2011.

“With more people having smartphones and tablets there are fewer new users to give them to, and giving to existing users is more challenging since existing users are already tied into carrier contract renewal cycles, app ecosystems, etc,” Gordon wrote.