Snapchat vows to shut its hole in wake of 4.6 million user data breach

Mobile image-sharer Snapchat has promised an update to its service to seal off a security hole that allowed hackers to harvest the account details of some 4.6 million users.

The company said that its update will allow users to opt out of the Find Friends system and prevent others from looking up their account information through address books. In doing so, users will no longer appear in results when others seek to match their address book numbers with potential Snapchat friends.

"When we first built Snapchat, we had a difficult time finding other friends that were using the service," Snapchat told users. "We wanted a way to find friends in our address book that were also using Snapchat – so we created Find Friends."

The move looks to close a security hole in the Snapchat service which left users subject to a "brute force" hacking process in which an attacker could build a database of contact information by uploading an archive of phone numbers to the service and saving those which returned links for Snapchat users.

Such methods were described by researchers at security firm Gibson Security, who claim to have notified Snapchat of the flaw several months ago. The company said that by exploiting flaws in the Snapchat API, the process of searching and collecting account information for mobile spam and other services could be largely automated.

Though initially dismissed by Snapchat as a "theoretical" flaw, the vulnerability was soon seized upon to build a partially secured archive of 4.6 million user names and phone numbers.

Snapchat said that in addition to implementing an opt-out for Find Friends, the company is updating its systems to help prevent automated brute force attacks or exploits.

According to security vendor AdaptiveMobile, the leaked numbers are largely concentrated to California and New York, with the two states accounting for some 2.3 million accounts. Other regions impacted include Illinois, Colorado, and Florida. 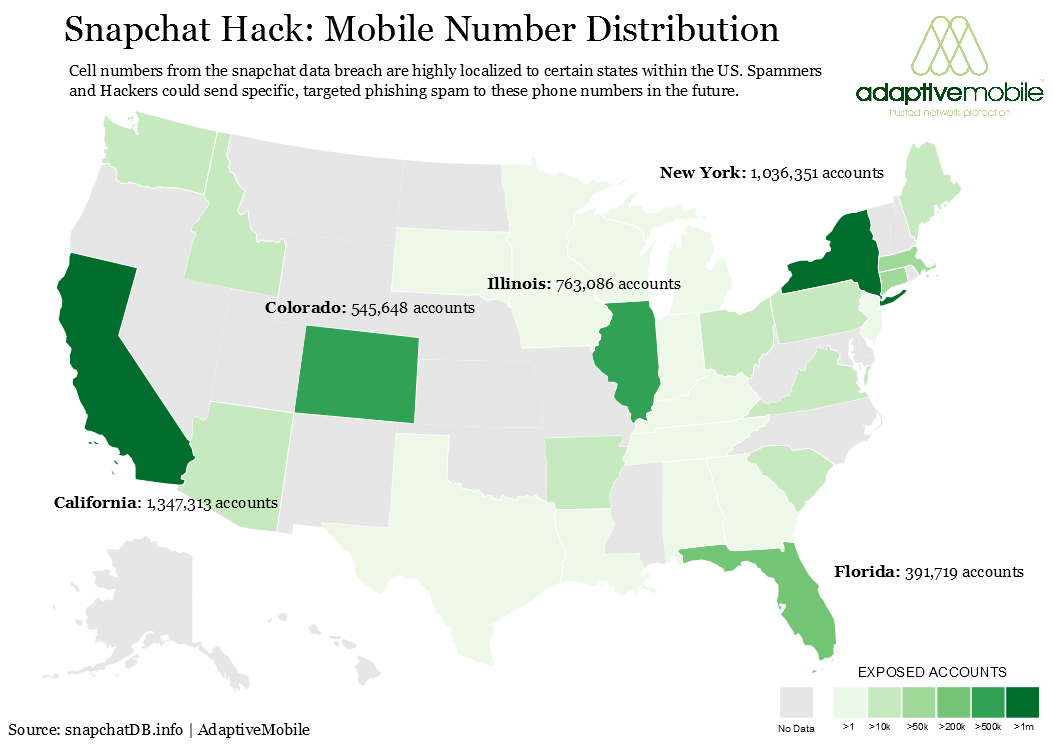 Leaked accounts are largely confined to the coasts (source: AdaptiveMobile – click to enlarge)

Snapchat noted that no other personal data or user photos were collected in the attack, and CEO Evan Spiegel stopped short of issuing a mea culpa for the incident when speaking with The Today Show.

"I believe at the time we thought we had done enough," he said, "but in a business like this that is moving so quickly, if you spend your time looking backwards, you're just going to kill yourself." ®