How to kill trolls and influence Apple people: A patent solution

Having decided that the patent problem is an attempt to solve a public goods problem, as we did in part 1, let's have a look at the specific ways that we put our oar into those perfect and competitive free markets.

It's worth just noting that patents and copyright are not, absolutely not, the product of some fevered free market dreams. Rather, they're an admission that "all markets all the time" does not solve all problems. That exactly why we create the patents.

Given that people find it very difficult to make money from the production of public goods, we think that we probably get too few of them. Innovation, the invention of new things for us to enjoy, is one of those public goods. It's a hell of a lot easier to copy something you know can already be done than it is to come up with an invention yourself. So, if new inventions can be copied easily then we think that too few people will invent new things. We're not OK with this idea. Thus we create a property right in that new invention. The inventor can now make money out of the invention and thus we get more new things.

And if it were only that simple, then of course we'd all be for patenting everything for ever. However it isn't that simple. For not only do we want people to invent new things, we also want people to be able to adapt, extend, play with, improve those new things. Or apply them to areas the original inventor had no thought about. In the jargon, we want not just new inventions but also derivative ones. So we want to balance the ability of inventors to protect with the ability of others to do the deriving. And that's probably what is actually wrong with our patent system today.

Have a look at Tabarrok's curve: 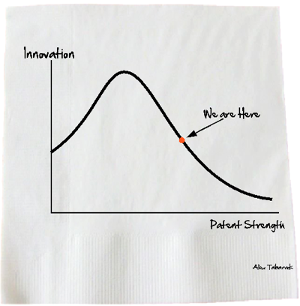 You can have public goods AND free markets

There are a number of arguments out there about what we should do. One is simply abolish patents because they're the invention of the free marketeers. This woefully misunderstands the economics here: the patent exists because even we free marketeers agree that the public goods problem won't be solved without government sticking its oar in.

Another argument, closely associated with the American economist Dean Baker, is that government should set prizes for the person to create a particular invention. He's thinking mostly of Big Pharma here, and a drug to treat a certain condition. This has its merits but it does require that government knows what it wants first. Sometimes it even does (we'd all like a cure for HIV/Aids in order to bring back the halcyon swinging days of the '70s for example), but most of the time government might know what it wants but it has no sodding clue what sort of inventions the rest of us would like. I can't see a government offering a prize for a [NSFW] Fleshlight but there are those who rather like the fact that someone invented it. So I'm told anyway.

Majority opinion among the economists is that while patents and copyrights might not be perfect even as a basic system, our best plan is to try and rejigger the two systems so as to make them as good as we can. Simply because those public goods problems are a right bugger to solve and that's just a fact about our universe. There is no majority opinion about what that jiggering should be, though, so what follows is my opinion rather than what we've got above, a generally agreed statement.

What should we patent?

The first and most obvious thing would be to only issue patents upon things that are actually patentable. The various patent offices, the USPTO to the fore, have been dreadful on this in recent years. True, Congress isn't giving them the budget, but still...

To be patentable something must be both novel and also non-obvious and it's quite clear that patents are being issued that do not meet these requirements. There's often a great deal of prior art (ie, proof that people were already doing it) around some patents and others just seem trivially obvious. Unfortunately the current system is such that these still get the patent and then it's up to the private sector to fight it out in the courts. It would certainly be a good idea to get the rules enforced properly right at the beginning.

The second would be to move a very large class of current patents off the patent law base altogether and move it over to copyright. I refer of course to software patents (the so-called design patents such The Apple rectangle with rounded corners, pretty much are copyright and trademark law these days, not strictly patents at all) and also to business process patents like Amazon's One Click Shopping one. I'll agree that these are inventive and I'm entirely happy for them to gain property rights protection. But not to the strength of a patent.

Essentially, a patent covers what you're doing (OK, this isn't entirely true, but it's a useful way of thinking about it). Thus finding another way to do something patented doesn't get you around the problem of that patent (I know this isn't strictly true, bear with me). Copyright, rather, says that this precise method of "doing the thing" is protected, but all of the other ways of doing it are not (again, not accurately true, but for a given value of “true”, as Sir Pterry points out).

Thus, if we move software over to copyright and not patents, then we can cover "the actual code being used" rather than the thing being done. That would cut a lot of the crap out of the system just there. The same with those business process patents: one-click shopping is just great but it would be the way that Amazon implemented it that was protected, not the thing itself.