Dusty old supernova could reveal answer to life, the universe and EVERYTHING

Astroboffins using the ALMA telescope in Chile have snapped new images of a supernova dust factory, which could help them figure out how galaxies are formed. 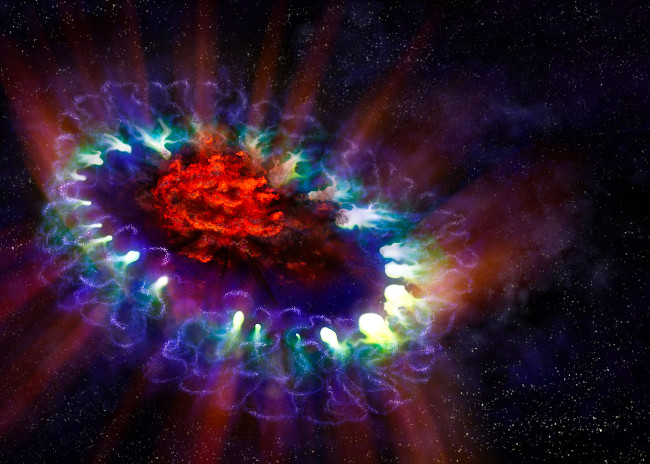 Nova and out ... artist's illustration of Supernova 1987A. Credit: Alexandra Angelich

The pictures from the Atacama Large Millimetre/submillimetre Array (ALMA) show the remains of a recent supernova, which is now full of material that didn't exist just a few decades ago.

Galaxies can be quite the dust-gatherers and astronomers already think that supernovae could be a primary source of that dust, especially in the early life of the Universe. But so far, scientists have seen little sign of supernovae actually producing dust.

"This is the first time we've been able to really image where the dust has formed, which is important in understanding the evolution of galaxies," said Remy Indebetouw, an astronomer at the National Radio Astronomy Observatory (NRAO) and the University of Virginia.

Supernova 1987A [2], which is in the dwarf galaxy known as the Large Magellanic Cloud orbiting the Milky Way around 160,000 light years from Earth, is the closest observed supernova explosion since Johannes Kepler's observation of a supernova inside the Milky Way in 1604. Astronomers keeping an eye on the glowing remains predicted that as the gas cooled after the big boom, large amounts of dust should form as atoms of oxygen, carbon and silicon bonded together in the cold central regions of the remnant. But early images of the supernova, made during the first 500 days, only showed a small amount of hot dust.

Now, using ALMA's sensitivity, researchers have been able to snap pics of the far more abundant cold dust, which glows in millimetre and submillimetre light wavelengths. They now think that the remains contain around 25 per cent of the mass of the Sun in newly formed dust.

"SN 1987A is a special place since it hasn't mixed with the surrounding environment, so what we see there was made there," said Indebetouw. "The new ALMA results, which are the first of their kind, reveal a supernova remnant chock full of material that simply did not exist a few decades ago."

Despite how much time has passed, the supernova isn't done exploding just yet. The shockwave from the initial detonation radiated out into space, producing glowing rings of material. Those rings eventually hit the envelope of gas which was released by the original red giant star as it neared the end of its life. That sent part of those shock-rings rebounding back towards the centre.

"At some point, this rebound shockwave will slam into these billowing clumps of freshly minted dust," said Indebetouw. "It's likely that some fraction of the dust will be blasted apart at that point. It's hard to predict exactly how much - maybe only a little, possibly a half or two thirds."

Boffins are waiting to see if a good fraction of the remains survive and make it into interstellar space, which would further back up the theory that the copious dust astronomers detect in the early Universe comes from supernovae.

The full study, "Dust Production and Particle Acceleration in Supernova 1987A Revealed with ALMA", is due to appear in the Astrophysical Journal Letters and is currently available on arXiv here. ®