But US still dodging Microsoft's smartphone... 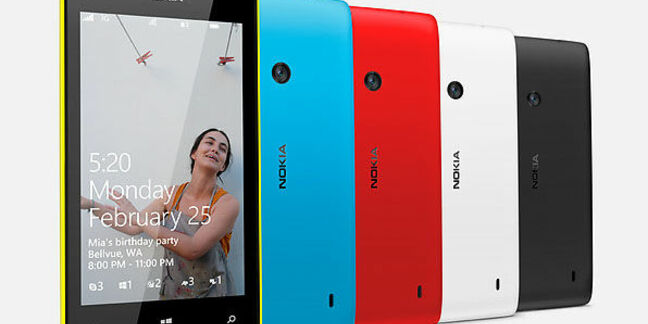 Microsoft's smartphone gains in Europe haven't been matched in the world's two biggest markets, the USA and China, according to the latest Kantar tech panel.

The survey shows Windows Phone maintaining 10 per cent of new sales across the five biggest European markets in the three months ending in November - and Windows Phones even outselling iPhones in Italy (16 per cent to 11 per cent).

However sales of smartphones running Microsoft's mobile OS are becalmed in the USA and China, at just 4.7 per cent and 2.7 per cent respectively.

Kantar's ComTech panel also shows small gains in Android share at the expense of iOS in Q3, but the fourth quarter is traditionally Apple's strongest, and the three-month period didn't include a full three months of iPhone 5S and 5C sales. So it's too early to declare whether the cheap-looking but expensively priced 5C has harmed Apple - or whether Cupertino's enormous marketing blitz is winning the market round.

In the UK, Android claimed 55.7 per cent of the market, and iOS 30.6 per cent, with Windows Phone at 10 per cent. According to AdDuplex, Windows Phone's success owes much to one device: the Lumia 520, accounting for 39.3 per cent of WP8 devices sold worldwide, and the number is as high as 57 per cent in Vietnam.

This is not surprising - Microsoft sells the device for $69 SIM-free in the United States and in the UK price fell to £69.95 - considerably undercutting the best cheap Android phone, the excellent Moto G, which can be found for around £130.

Kantar's Dominic Sunnebo thinks Microsoft will have to choose between the USA and China, with the latter the loser. As some 32,000 Nokia employees transfer to their new corporate masters Microsoft really has two goals. It must maintain the low cost success of the 520 and kindle some (or any) interest in high margin devices like the Lumia 1020 and 1520.

Although the acquisition of the former No 1 phone manufacturer's mobile division was announced in early September, we don't yet know what the branding or strategy will be - or whether the Nokia brand will be retained at all. Since the name has been disappearing - that looks doubtful.