Why 2014 might just be the year of the Google Chromebook

Netbooks done properly: Cheap, the right size and without Windows 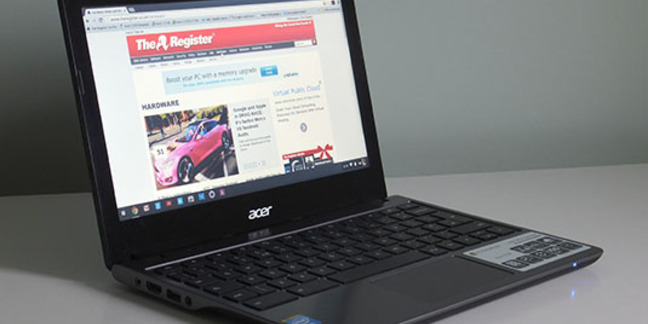 Can Google’s Chromebook become the laptop platform of choice during 2014? Probably not, but there’s certainly demand for it. According to US market-watcher NPD, during the 11 months from January through November 2013, the platform’s share of the computing device market had risen to 9.6 per cent from just 0.2 per cent in the same months of the previous year.

By contrast, Apple’s laptops accounted for a mere 1.8 per cent of the market in 2013, down from 2.6 per cent the year before. Windows-based laptops also declined, though they remain the biggest seller: their combined share fell from 42.9 per cent to 34.1 per cent.

Do the sums, and that means Windows laptops took 75 per cent of the US notebook market, Chromebooks 21 per cent and Apple a measly four per cent. Some 6.6 million laptops were shipped through commercial channels, says NPD, of which just under 1.4 million were Chromebooks. Five Chromebooks were sold for every MacBook.

Of course, MacBooks are four to five times more expensive than the average Chromebook – $1,000-plus against around $200 - so the gains for the various devices’ respective manufacturers isn’t the same. But the numbers show that punters are not only continuing to buy laptops despite the rise of the tablet - NPD’s numbers show unit shipments up 24.5 per cent year on year - and that they like the idea of only paying a few hundred bucks for one.

At that price, owning one in addition to a tablet isn’t perceived as a barrier. Punters can have both. With so much data existing outside the machine - and so many applications centring on data creation or, rather, file creation - there’s no longer any real concern that the device you pick up doesn’t contain the files you want.

What Chromebooks appear to be doing is winning that part of the laptop buying audience that might once have snapped up a netbook. Netbooks were arguably killed off by tablets, but the form-factor’s smaller-than-a-notebook limitations arguably had as much to do with it as the rise of the iPad.

Early netbooks came with Linux, but that bamboozled folk who felt they needed Windows as a security blanket. Windows, in turn, upped the netbook specification - a big hard drive rather than a small amount of Flash; a faster, more battery pummelling CPU - and a higher price. The screen and keyboard were too small for most grown-ups too.

Tablets showed that size need not be a problem for the kind of casual, browsing- or communications-centric jobs a lot of folk use computers for at home.

HP’s problems sorting out a major charging bug in the released-then-withdrawn Chromebook 11 aside, there are already a handful of alternatives on sale. Some are from HP itself - Pavilion Chromebook, Chromebook 14 - and others from Samsung and Acer, not to mention Google’s own Chromebook Pixel, though this is considerably more expensive.

More are coming. Dell will have its Chromebook out later this month, Sony’s Vaio VCC11 is expected in the spring, and Toshiba has shown one off at CES too that’s due out until February. Asus is said to have a couple in the works. At CES, Lenovo US president Jay Parker told CNET the company will have “multiple Chromebook models” in the market by the Summer.

Acer, Asus, Dell, HP, Lenovo, Sony and Toshiba - that’s essentially the world’s key laptop makers other than Apple and, as the numbers show, in the US Apple really isn’t that big a player.

“We believe the market will accelerate greatly in the next 12 months,” said Parker. “I think Chromebooks can be very impactful in the market really quickly.”

Of course, that’s what all these companies said about the netbook. This time round, they are offering systems at netbook prices with notebook form-factors. That’s one of the key netbook failings addressed.

As for the other, Windows, now that punters have grown accustomed to alternative operating systems through their experiences with iOS and Android, they’re clearly far more open to the idea of having a laptop without Windows than they were in the middle of the last decade.

“The presumption that desktop Windows is ‘most familiar’ [to users] no longer applies,” says Jeff Orr of ABI Research, a market watcher.

Google is a very strong brand and so many people now use its online services.

Market analyst Gartner reckons Chromebook sales will hit 4.79 million worldwide in 2014, rising to 8.0 million the year after. It says 1.84 million of the machines shipped in 2013, so you’re looking at 160 per cent growth this year - well in excess of any other platform - and 66 per cent the following year. ®