AMD has released its long-awaited Kaveri processor, the first accelerated processing unit (APU) to incorporate both on-die CPU and GPU cores in a heterogeneous system architecture (HSA) with a shared memory architecture. 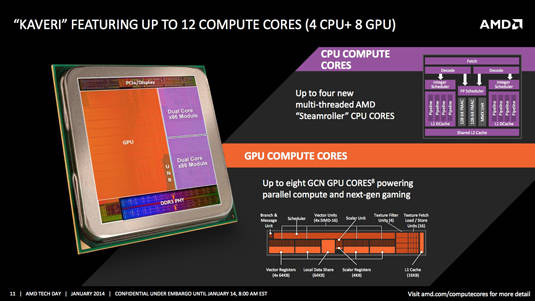 Behold Kaveri, in which CPUs and GPUs are equal 'compute unit' partners (click to enlarge)

"We're going to need to create a new term," AMD product CTO Joe Macri said at a Kaveri briefing, "because HSA has really changed what can be done on the graphics part of the die."

That new term, Macri explained, is compute cores. "The compute cores can either be CPU cores or graphics cores," he said. "We based them on the historical definition of what a CPU is," meaning that in an HSA system, each compute core – CPU or GPU – is programmable, capable of running at least one process in its own context in its own virtual memory space, and do so independently from all the other cores on the 2.41-billion transistor, 245mm2 die.

The four CPU cores and the eight GPU cores in the HSA-enabled Kaveri processor can each run its own thread, drawing data from a shared memory space. Kaveri, Macri explained, should therefore be regarded as a 12-core processor.

"We want to be able to talk about core count," he said, "because when we describe the device, core count represents throughput to first order [tasks]. There are other metrics of throughput that can also be applied, but we thought it was very important to be able to talk about a device, talk about the number of cores, and have the end user in the technical community to start picturing in their mind what the capabilities of this device really are."

So from now on in the new HSA environment, AMD would like you Reg readers – members of the technical community that you are – to subsume the terms CPU and GPU into the larger, more inclusive term of compute cores. "It's going to become part of our dictionary, our technical dictionary going forward," Macri said. 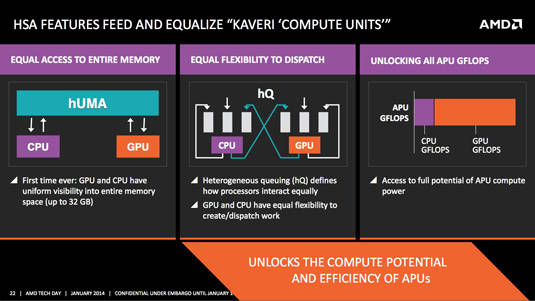 In HSA, memory is shared by compute units (click to enlarge)

What ties them together and makes them cooperative compute cores is HSA, comprised of hUMA (heterogeneous uniform memory access) and hQ (heterogeneous queuing). "An unprecedented amount of parallelism is available in Kaveri," Macri claimed, "when you literally have 12 unique threads running on this design. First time ever."

The CPUs are first among equals, he said, because they're the most general-purpose cores, and the version of the Steamroller cores in Kaveri have been tweaked to improve efficiency and performance.

Next page: On the die, memory matters
Page: