When is 28 nanometers faster than 22?

Kaveri is baked in a 28-nanometer, planar, bulk silicon process, which is nowhere near as efficient as state-of-the-art FinFET (what Intel calls "Tri-Gate") or even the less-than-TriGate, more-than-bulk – and somewhat expensive – silicon-on-insulator (SOI) process that was used in Kaveri's predecessor.

There were reasons to go with 28nm rather than 22nm, Macri told us, that were discovered during the design process. That process was run by what he identified as a "cross-functional team" composed of "CPU guys, graphics guys, mixed-signal folks, our process team, the backend, layout team."

That cross-functional crew identified a boatload of process variants, and members of the team each ran tests based on their areas of interest, examining such factors as power curves and die-area needs.

"What we found was with the CPU with planar transistors, when we went from 28 to 22, we actually started to slow down," he said, "because the pitch of the transistor had to become much finer, and basically we couldn't get as much oomph through the transistor."

The problem, he said, was that "our IDsat was unpleasant" at 22nm, referring to gate drain saturation current*. In addition, the chip's metal system needed to be scaled down to fit within the 22nm process, which increased resistance.

"So what we saw was the frequency just fall off the cliff," he said. "This is why it's so important to get to FinFET." 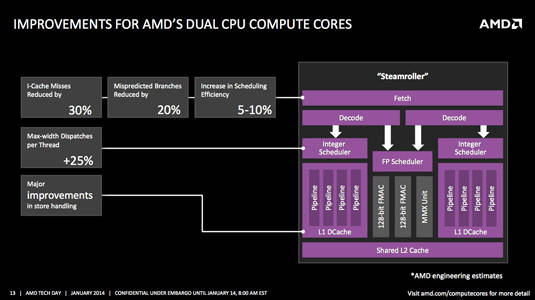 Moving to 28nm was best for the CPU in a bulk planar process, he said, and moving from the previous 32nm process to 28nm gave the GPU cores a "nice little boost." That said, "It wasn't as nice as I would have liked to have gone for the GPU, which is as small as you could make it."

The process in which Kaveri is baked, in fact, is a compromise between the needs of the CPU and GPU cores – it's a balanced system. But it's also a dual-mode system: the chip can use its GCN cores for graphics, or it can be coupled with a discrete graphics card. In the latter mode, Kaveri's GCN cores can pick up CPU chores, thanks to the HSA architecture.

HSA, Macri said, allowed Kaveri's designers to make optimizations that were "better for the notebook, and didn't hurt the desktop because we still kept the silicon alive when we're on desktop" and using a discrete graphics card.

"Let's say you're playing a game and using the discrete to drive all the visuals," he said. "You can now use the compute in the APU to drive all the physics. And you don't run into the problem like we've run into in the past of, 'Oh, damn – I do a bunch of physics on my GPU and my frame rates start to go down. I get great effects, but if I'm in a first-person shooter, I want high frame rates.' You want high frame rates with great physics – that just gives you better game play."