In addition to the combination of CPU and GPU cores in the new HSA-enabled shared category of compute cores, Kaveri adds some specialized fixed-function accelerators, as well.

"The reason we put accelerators on the device is that we want to keep the CPU and GPU free to do things that only are available via general-purpose computing," Macri said during the briefing. For example, he said that the industry-standard H.264 video codec shouldn't clog up the CPU and GPU cores, and is an ideal candidate for a specialized accelerator that can perform such tasks using less power.

To handle H.264 encoding, Kaveri has an on-die video encoding engine (VCE). So did its APU predecessors, but Kaveri's version has been amped up with new capabilities, including what Macri called significantly improved text rendering and 60GHz wireless docking (that's not a typo).

There's also a new audio coprocessor that AMD dubs TrueAudio, which has multiple digital signal processors, its own on-die storage and DMA agent, and its own programming interface so that developers can tightly control sound quality and direction. 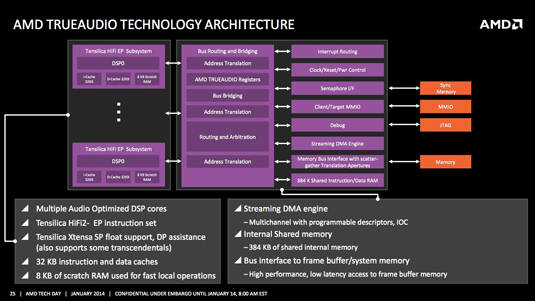 Macri emphasized that TrueAudio takes up only a small bit of the Kaveri die. "The big die area is for the CPU and the GPU," he said. "That's left free to do things that only they can do." The TrueAudio accelerator takes only a comparatively tiny slice of real estate, but it frees up the "maximum amount of compute area for all the good stuff."

Work on all of Kaveri's goodies – HSA, hUMA, hQ, CPU, GPU, accelerators – Macri said, started about four years ago, and has resulted in new cores, new compute architecture, new power management, new CPU/GPU balanced process, and new accelerators. "We had to predict the future," he said, speaking to the assembled press at the briefing, "and you guys are going to tell us, did we predict right."

Well, no, we're not. As much as we press folks like to think that we have the power to influence the market to a great degree, we have to disagree with Macri on this point.

It's you, Reg reader, and your compatriots in the marketplace who are going to decide whether AMD and its new Kaveri processor correctly judged the needs of the next generation of computing, not the tech press.

We look forward to learning your verdict, which will decide whether Kaveri warrants the catchphrase of AMD's briefing: "Welcome to the Revolution." ®