Take a pic of radiation? There's an app for that

Late last year, an app called GammaPix garnered some media attention as a kind of low-cost geiger counter. Now, a US test lab has confirmed that yes, smartphone cameras can detect radiation.

The idea is simple enough: the CMOS cameras should generate some kind of signal in the presence of radiation, so all you need is an app to capture that signal, and you have a low-resolution gamma ray detector. According to Popular Science, the app was tested at the Disaster City facility in Texas last year.

Now, a group of researchers at Idaho National Labs has not only confirmed the science behind the idea: they've also characterised a handful of different cameras to check out their performance. In a paper published at Arxiv, the researchers, led by Joshua Cogliati, have demonstrated that with a bit of processing, a CMOS camera can be used as a radiation detector.

When the camera is struck by an ordinary – low-energy – photon (in the visible light range, below 3.1 electron-volts), an electron-hole pair is created that the camera's electronics captures. Gamma radiation is much higher energy, so high that most of the electrons energised by an incoming ray are knocked completely out of the detector material, but “a 20 keV electron might ionize 10,000 secondary electrons. Electrons with high enough energies will leave trails of ionization as they travel through the material,” the authors write – and those trails are detectable. 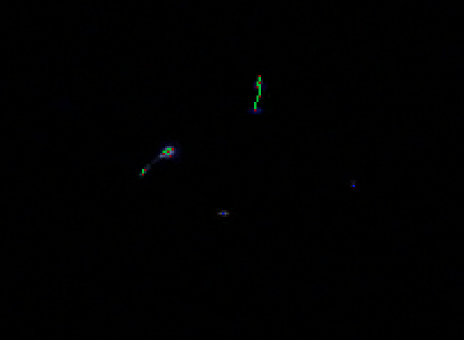 Rather than testing the existing GammaPix app, Cogliati's group created their own app, which they dubbed CellRad, to do the noise removal and detection. Since the detectors are too thick to “stop” the incoming radiation, they note, spectroscopy (which is usually used for optical-style radiation detection) is no use.

“The software processes the image to find lines and groups”, they write, with ImageMagick used for pre-processing. Their own line_finder algorithm used averages of the red and blue pixels as the detection “target”.

CellRad was tested against isotopes of Selenium, Iridium, Caesium, Cobalt and Americium. Naturally enough, the higher-resolution back camera on the test phones – a Samsung Nexus S, Galaxy Nexus, and Galaxy S III and an LG Nexus 4 – because the front camera is lower resolution.

The Nexus S beat all comers in terms of radiation detected per-image, with “excessive noise” crimping the S III's performance. The researchers also noted that there was less variation between two Nexus S phones than for any of the other test devices.