Health Sec opens new data centre: Biz not Surrey to be in Godalming

NHS will need to store some data soon, eh?

The London data centre market, according to the firm's CEO, accounts for over half of the entire European data centre market. Most of the region's colo facilities are currently situated in London's Docklands. The firm cited power availability as a main reason for situating it 40 miles (64km) away from the hotspot.

Aegis went ahead with planning the data centre when it got surety of a 4MVA power supply back in 2009. Since then, the supply has been uprated through 6.2MVA to 9.4MVA. Security and capacity of supply, according to an Aegis One spokesperson, was crucial, and that came before looking for land to buy.

Hunt cut the ribbon in his capacity as South West Surrey's MP as the new colocation facility is located in his constituency.

The structure will use free air-cooling, taking in air from outside the building and pushing it underfloor to cold-aisle/hot-aisle customer rack rooms inside inner shells inside the building. Chillers on the roof will will come into use on the few days of the year when the temperature is set to exceed 26˚C.

Aegis One CEO Gerald Pawsey at the opening

The idea is that the Aegis One, the first phase of a purpose-designed and built data centre, can be cost-effective for customers because it will be able to have more densely populated racks of equipment - because of the high capacity power supply of up to 30kW/rack - and lower cooling costs than a traditional data centre can provide. Aegis One has a 1.1 PUE (Power Usage Effectiveness) rating, based on full load.

If the power supply does fail, Aegis One has standby generators powerful enough to supply 15,000 homes.

The security is site-independent of course. There is a claimed 24x7 10-layer system featuring gates, secured holding areas, digital keypads, biometrics and what-not. But keeping out undesirable bodies is not the main worry these days, is it? People seem more concerned about the NSA and GCHQ...

Aegis One has a Tier 3 (n+1) resilient infrastructure, basically having two of everything, and 30,000 square feet of space, spread over two floors – enough for 700 or more racks. The site is carrier neutral, “with access to over 200 carriers,” and sub-0.5ms latency (synchronous replication distance) to London’s Docklands.

Aegis CEO Gerald Pawsey provided a canned quote: “It is very exciting for us to see Aegis One come to fruition, with a number of customers lined up for when we go live in April, together with planning permission for Aegis Two already gained.”

Currently the land next to Aegis One has been bought and is being used as a car park. It’s planned as the location for Aegis Two, which will open in 2015.

Pawsey added this: “Because … the London market accounts for over 50 per cent of the entire European data centre market, we believe that our new brown field site just outside of London offers our customers a significantly more cost effective and secure offering.”

Jeremy Hunt said that he, personally, knew about the effect of rising data storage demands, as the UK’s NHS is anticipating having to store 100,000 individual genome records and (he hopes) will be the first country in the world to have digital health records for all its citizens under the controversial care.data programme. 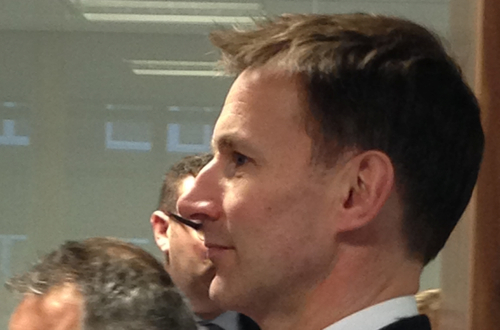 Jeremy Hunt at the opening. Photo by Chris Mellor

Pawsey and Hunt both attended the nearby Charterhouse School, which sent a pair of pupils and a member of staff to the opening.

We can expect other data centres to be built in a ring around London as operators find sufficient electricity supply headroom to make it worthwhile. How long before a data centre operator gores into business with a power supply company specifically to do this? 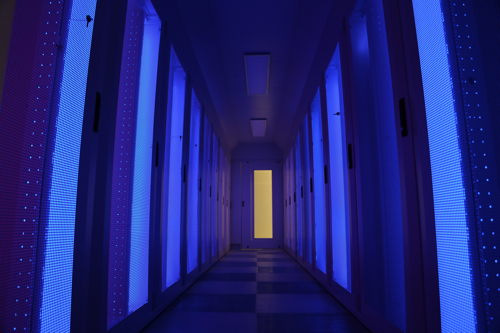 Find out more about this new colo from Aegis Data. ®