Own stock in a desktop-cable company? Sell it 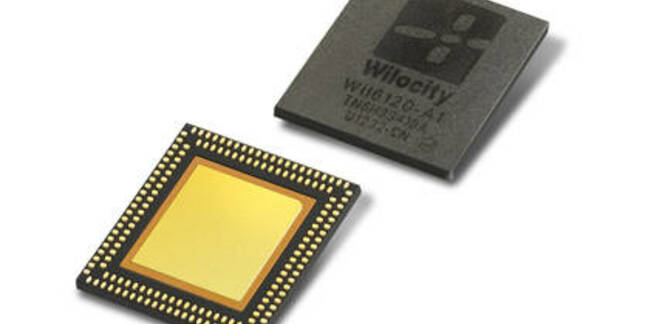 CES 2014 WiGig pioneer Wilocity, developer of 5Gbps 802.11ad Wi-Fi chippery, has shipped more than a million of its chipsets, but it has bigger plans for the future of its tri-band 60GHz, 5GHz, and 2.4GHz chipsets – including using them to turn desktop phones made by its new partner, Cisco, into wireless desktop hubs.

Currently, Wilocity's 802.11ad tech appears in multiple Dell Ultrabooks and workstations, plus that company's Wireless Dock, where it pipes audio, video, USB 3.0, gigabit Ethernet, and other connectivity to its connected client over high-speed wireless signals.

"That's kind of yesterday," Wilocity CEO and cofounder Tal Tamir told The Reg when we met with him as CES 2014 drew to a close last week. "Let's move to what we are doing this year."

The middle of this year, Tamir told us, will see an upgraded, smarter dock that the company dubs "Stingray" – and he assured us that the modules inside the prototypes he showed us were fully operational and now available to partners. "The boxes that you see – ignore the design – but the insides are form-fit, ready, full-mask, everything, ready to ship."

Stingray expands on the existing docks' wireless connectivity by adding the ability to run a thin client – a small Linux system, for example – on the dock even when notebooks, tablets, or whatever are undocked. "You still have a useful kind of a desktop experience that you can work with," Tamir said, giving the example of a Netflix client running on Stingray's Marvell system-on-chip.

Tamir said that the early adopters of his company's docks have been smaller companies – and that's a limitation that Wilocity's recently announced partnership with Cisco is intended to surmount.

"In order to reduce the anxiety level of this new category of docking solutions that can actually replace what [enterprises] use today," he said, "we connected with Cisco." This year, that partnership will see Wilocity's Stingray boxes connecting to the Cisco enterprise fabric, making them visible to and manageable by IT admins just like any other routers or switches connected to the fabric.

Tamir showed us Stingray boxes connected to Cisco's Prime for IT management system, which gives an admin visibility into and control over Stingray's connectivity services, and provides the ability to manage the levels of services provided to devices connected via Stingray. "I can do anything that Prime can do," he said, demoing the setup. "That makes [Stingray] an enterprise-grade box."

All well and good, but Wilocity's plans for next year, however, are where things start to get really interesting. "If I have wireless docking capabilities," Tamir said, "I'm not limited to a connector or any type of mechanical constraint, so why dock just one?" His demo of what's on tap for 2015 showed a group of devices – notebook, tablet, and smartphone – all wirelessly and concurrently connected to the same dock, with their displays all appearing on the same monitor.

In the demo, a notebook was connected wirelessly at 60GHz, and a tablet and smartphone phone were connected at 5GHz. The tablet and phone, as would be expected, showed some latency when their displays were accessed over the common monitor, but notebook access was virtually seamless with a 40-millisecond latency – a figure Tamir said should be halved by the time the system ships.

Tamir also told us that the 2015 system will add the ability to share content among the connected devices so that, for example, a photo taken using the smartphone can be dragged on the shared display to the notebook or tablet. As you might assume, the thin-client capability of the 2014 system will also be retained in the next-gen box.

Peripherals – keyboard, mouse, printer, storage, microphone, storage, and devices running Windows, OS X, Android, iOS, whatever – can all be shared. The display can be everything from a common computer monitor to a 4K television. "It could be your living room," he said. "It could be your TV, and on your TV you could see your kid's iPhone, your iPhone, set-top box, my cloud service, and mix and match between them."

What's more, the system can also function as a publicly available access point manageable over Cisco's Prime for IT, so that if increased wireless access is needed in a particular installation, it can be opened up to select users by an IT admin.

One particularly clever implementation of the 2015 system, to our mind at least, that Tamir showed us was the chippery incorporated into a stock Cisco desktop business phone – which one Wilocity staffer jokingly dubbed a "phok", for "phone dock". In this implementation, which would raise the price of the phone only marginally, tri-band Wilocity chips could seamlessly Trojan-horse their way into the enterprise.

The power draw of Wilocity's chipsets are low, Tamir told us, so low that we should expect next-generation 5Gbps "Sparrow" chips to appear in smartphones in 2015. "Battery life and power will be the same as using Wi-Fi," he promised, noting that if such a smartphone powered by, say, a quad-core Qualcomm Snapdragon were connected to a large display with peripherals attached using the 2015 docking station, it could be a perfectly acceptable productivity platform.

The software underpinnings of the device-sharing system are being developed by Wilocity but will be made open source – and for a very straightforward reason: the company needs an ecosystem to arise around its chipsets.

"In today's world, especially since you are a leader, you cannot just push chips into the channel," Tamir said. "With these kind of capabilities you kind of have to break the box." ®

Following the wild, roaring success of its Snapdragon 8cx Arm laptop chip, Qualcomm's back with the 8c, 7c

Looking forward to seeing these in, well, anything would be nice