All-flash array flogger Nimbus Data: We coined it in 2013

All-flash array firm Nimbus Data released results from the year to date, saying it had had a great 2013.

Nimbus claims: “Revenue, Net Income and Headcount Growth Outpace Industry Peers.” On the the hand, flash rival Pure Storage just a few weeks ago claimed its growth over the 2012-2013 period has included 50 per cent plus growth per quarter.

Back in March last year, after we ran a Nimbus staff leaving story, Nimbus said: “Company headcount has doubled in the last 12 months, not shrunk as you have claimed.”

A 125 per cent head count growth could mean the company has around 50 employees now, compared to 22 or so a year ago.

We expect more product news this year, CEO Thomas Isakovich saying: “In 2014, we expect to continue to widen our technology leadership with multiple new software and hardware offerings that push the boundaries of storage efficiency and application performance.”

Let’s leave you with a Nimbus cup cake illustration tweeted by business development person Brittani Neff. OK, the blue icing is not that appetising, but who said this business isn’t fun? 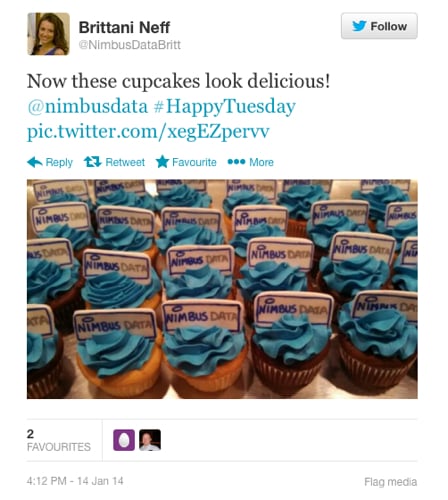