The European Solar Orbiter project has taken another step towards launch-readiness, with Australia's CSIRO delivering the last of the optical filters that the orbiter needs to image the sun.

The spacecraft is due to launch in 2017, and will adopt an orbital distance similar to that of Mercury, which is closer than other spacecraft have been to the sun. Its mission is to capture high-quality images of the inner heliosphere, and the sun's polar regions.

As Dr David Farrant, CSIRO's optics research leader, explained to The Register, the filters are designed to present very narrow wavelengths to the instruments capturing images.

“The main purpose of the filters is to select a very narrow wavelength band from the Sun,” he said. This will allow the Solar Orbiter to take very precise measurements of the magnetic field of the sun, because that magnetic field affects the sun's light.

“The magnetic field changes the wavelength very slightly – if you measure that change, you can measure changes in the strength and direction [of the magnetic field] across the surface of the sun,” he explained.

In particular, the filters are tuned to capture light at the absorption line of the iron ions the sun produces, since these are magnetically-sensitive.

Because the spacecraft's velocity isn't constant, the filter also has to be tunable. To achieve this, the CSIRO optics scientists have made the filters out of a lithium-niobate crystal that's electro-sensitive. By applying a voltage to the filter, its nominal centre wavelength of 617.3433 nm (accurate to one thirtieth of a nanometre) can be tuned across a very small range.

The tuning range, around +/- 0.2nm in wavelength, is enough to compensate for the +/- 26 km/s variations in the spaceccraft's velocity.

That tuning also allows the filter to be adjusted for the continuum of light across the solar disk, Dr Farrant said. 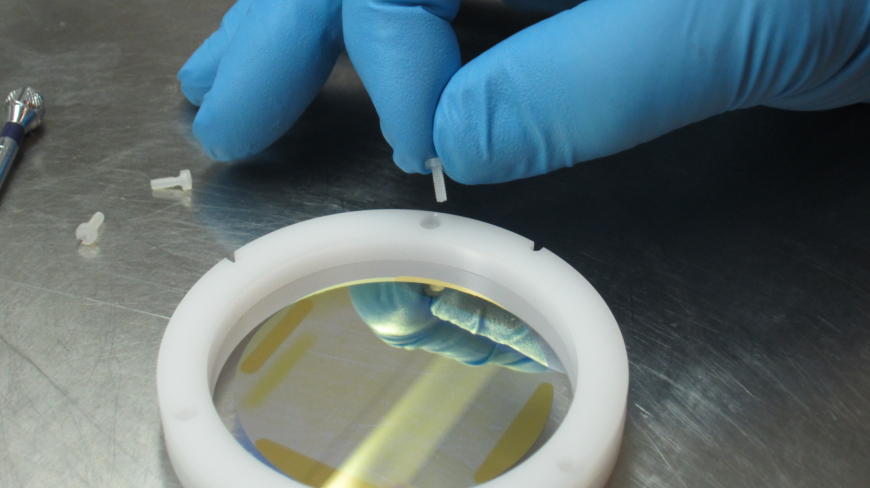 Handle with care: one of the optical filters destined for the Solar Orbiter. Image: CSIRO

Dr Farrant told The Register the crystals are difficult both to fabricate, and to characterise after they've been made. “These are very thin, very fragile crystals,” he said. “And we have to be able to get them flat, within a nanometre, over a large apeture.

“The absolute optical thickness has to be to sub-nanometre tolerance. We had to build a special metrology rig to measure that,” he added.

The crystals will then have to survive both the shock and vibration of launch, and the extreme heat of the Solar Orbiter's main mission.

“Our optics lab is the only place in the world where filters of this kind can be made to such precise specifications. Even then we had to develop a series of new techniques, precision lasers and even a new testing chamber, just to make this work,” he says in this CSIRO release.

The Solar Orbiter is expected to provide new insights into sunspot activity, helping in turn to predict the behaviour of solar winds and geomagnetic storms, which will feed into climate models. The tech, satellite and communications sectors are also keenly interested in sunspot activity.

The filters are now in the hands of the Max Planck Institute for Solar Systems Research, lead agency for this instrument, where they will be integrated into the spacecraft. ®