Here's something to take your breath away, citizens

Pics Citizens of smog-choked Beijing can watch a sunset on a massive LED display in Tiananmen Square, which will remind them of what the sun and sky look like. 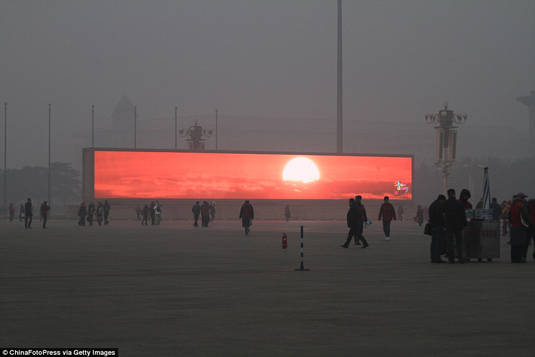 "I couldn't see the tall buildings across the street this morning," a traffic coordinator named Zhang apparently told The Daily Mail. "The smog has gotten worse in the last two to three years. I often cough, and my nose is always irritated. But what can you do?"

Zhang's nose is righteously vexed for good reason: concentrations of the particularly dangerous particulate matter known as PM2.5 soared above 500 micrograms per cubic meter in the Chinese capital on Thursday. Beijing's US Embassy recorded a high of 671 µg/m3 at 4am Thursday, The Mail reports. 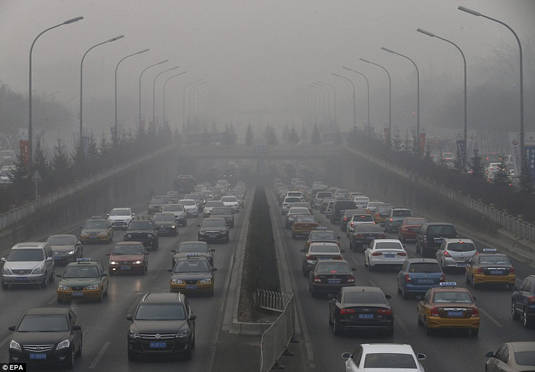 Clogged freeways, choking smog. Hmm, might there be a connection here?

PM2.5 – particulate matter that is 2.5 micrometers in diameter or less – is singularly nasty because its small size allows it to more easily be inhaled and become lodged in its victims' respiratory systems. As might be guessed, children, the elderly, and those with existing respiratory problems are most at risk.

The World Health Organization's air-quality guidelines [PDF] recommend exposure levels for PM2.5 to not exceed 10 μg/m3 for the annual average, and 25 μg/m3 for a 24-hour average, not to be exceeded for more than three days per year.

With those numbers in mind, things aren't looking too good for the residents of Beijing – and it's unlikely that they will be mollified by the fact that no matter how bad the air is in their lovely city, things are much worse about a thousand kilometers to the northeast in Harbin, where PM2.5 reached 1,000 μg/m3 last October.

The air is often crap a thousand kilometers to the southeast in Shanghai, as well, where China Daily reported that the US Consulate measured PM2.5 at 503 μg/m3 last month, prompting some expatriates to reconsider staying in China. "There are no masks left in 7-Eleven. They've sold out," one UK financial worker told the news service. "People are saying that if it continues like this, they're not sure if they want to stay here long-term." 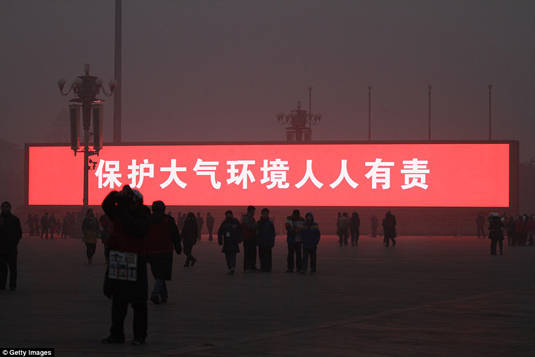 Should those worried expats decide to flee the country, we would advise them not to book a flight out of Beijing's Capital International Airport. Not only does that facility have the worst record for flight delays of any major international airport with an 18 per cent on-time rate, but one of the major reasons for that hideous performance is smog – so much so that the country's Civil Aviation Administration recently ordered all domestic pilots to train for low-visibility landings.

Last July, the Chinese government announced that it would spend $277bn on efforts to clean up northern Chinese air quality, particularly in Beijing, perhaps in response to last January's "Airpocalypse", during which PM2.5 peaked at 886 μg/m3 according to the US Embassy.

There's been no word whether any of those billions are helping to fund lovely displays of soothing sunsets in Tiananmen Square. ®

It's been suggested that the gigantic TV is showing an advert for tourists, rather than a sunset specifically for sunlight-starved citizens. However you look at it, China's incredible air pollution remains a very real problem.