How flash storage raced from glory to despair in 2013

And back again. For some...

Two CEOs went. Two companies crashed. Several were bought. All in all it was a hell of a year. Let's start with all-flash arrays.

Here's where a lot of the flash action was as all-flash arrays (AFAs) went mainstream. The legacy disk drive array suppliers all went into the all-flash array business as they built product to respond to Numbus Data, Pure Storage, Solidfire and Violin Memory arrays: 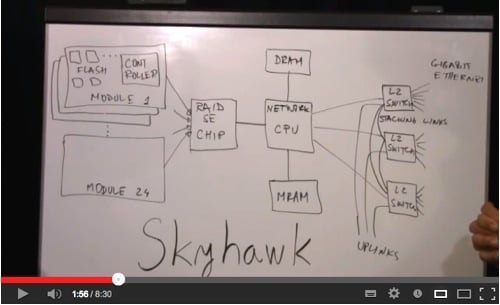 Frankly, if Skyera's boss, Rado Danilak, and his team hadn't developed the SandForce controller business, bought by LSI in October 2011, people wouldn't have believed the density of this skyEagle box. It was a pre-announcement, with product delivery slated for the second half of 2014, possibly earlier.

In March IBM's new storage general manager, Ambuj Goyal, said that transaction data should move from IBM disk arrays to flash arrays; "Our play is the all-flash array for transaction processing, not hybrids." In his view the flash array controller should sit behind a [mature] disk array controller, like a DS8000 or Storwise one. Then, in April, Big Blue announced a $1bn investment to boost its flash business.

Flash arrays or appliances have become the preferred place in the enterprise data centre for storing random data with high access rates.

Gamely countering the flash hardware appliance trend VDI technology supplier GreenBytes got out of the flash hardware business and transitioned to selling its VDI software with no hardware, thinking that flash arrays were headed towards commodity status and making profits would be darned difficult.

The startup AFA momentum is with Pure and Solidfire, Violin having been hobbled - see below.

Flash in the cloud

November saw Amazon put out compute instances with flash storage in its cloud. December saw us writing about Performance Servers from Rackspace which were stuffed with flash.

That's it really; game over; flash has arrived as a server accelerator in cloud server instances from CloudSigma, Amazon, Google and Rackspace. Any other cloud compute provider has to match that or cut prices to suicidally low levels.

Flash came to the cloud with no fuss really but fuss there was amongst the companies building and supplying flash storage; major league fuss.

Acquisitions, investments and and crashes

One view is that many flash cowboys went and struck it rich while others just struck out. Here's a summary:

The big news was effectively a no news item; despite encouragement from all quarters Seagate did not buy a flash technology company. Names mentioned included Violin, Fusion-io and Virident, with Seagate apparently turning down an offer to buy the latter. Disk in the cloud was more appealing to Steve Luczo's company than buying additional flash presence in servers, desktops or networked arrays.

Nexenta and other storage SW-only suppliers also have all-flash arrays provided through their partnerships and channels.