Array with you: IBM takes on upstarts with new RamSan flash cram

Up to 48TB of the fast flashy stuff

Big Blue has burst onto the all-flash array scene afresh with a million-plus IOPS box; its first in-house FlashSystem since buying TMS a year and a half ago

The FlashSystem 840 is IBM's latest iteration of its FlashSystem 720, 810 and 820 product range. It has up to 48TB of eMLC NAND capacity in its 2U rack enclosure (not a lot compared to Skyera's promised skyEagle with its 500TB in 1U, but hefty enough). In theory a rack full of 840s would hold 1.44 petabytes of flash.

The system retains the FPGA hardware design of its predecessor. It features what IBM calls "MicroLatency technology that significantly speeds data access times from milliseconds to microseconds (less than 135 microseconds)."

FlashSystem 840 - just another 2U rack box in appearance.

Read latency is 135µs while write latency is 90µs. Interestingly the 820 latency range was 25 to 100 microseconds - so it's quite a bit faster.

Host connectivity is via 16Gbit/s Fibre Channel, 40Gbit/s InfiniBand and FCoE/10GbitE ports. With 8GB/sec read and 4GB/sec write bandwidth IBM says the 840 has "nearly double the bandwidth ... of its predecessor, the FlashSystem 820." The 840 supports only one interface type per system – for example Fibre Channel or FCoE or IB – and interface cards are sold in groups of four for a total of eight or 16 ports for each system 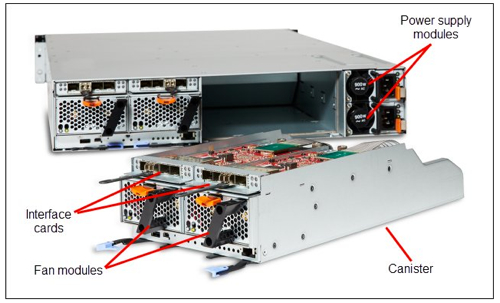 FlashSystem 840 contains two canisters. Each canister contains a RAID controller, two interface cards, and a management controller with an associated Ethernet port. This is a rear view with one canister removed

What has improved is RAS and data protection.

Where the 820 had a hot spare module, the 840 has a hot-swap flash modules - these aren't SSDs by the way - and fully redundant main components: RAID controllers, management modules, interface cards (all contained in the canister), batteries, fans, and power supplies are all redundant and hot-swappable.

IBM says all components are easily accessible through the front or rear of the enclosure with no need for opening the enclosure's top panel.

The FlashSystem 810 can have a RAID-0 scheme with data striped across the flash modules. With the 820 data protection advanced to what was called 2-dimensional RAID (Variable Stripe RAID and system-wide RAID 5) across the modules. The 840 offers both RAID-0 and 2D-RAID and variable-striped RAID. This is patented IBM technology that provides an intra-module RAID stripe on each flash module.

The 840 can encrypt data at rest with AES-XTS 256 bit encryption.

IBM has give the 840 a new SVC-style management GUI and a "tool-less hardware design, reducing installation and management time by as much as 4.8X as compared to the prior generation GUI." There is still a CLI for customers that need one.

We wrote about the SVC-FlashSystem combination in November last year and noted it didn't have deduplication. It still doesn't. Perhaps the compression, up to 5X IBM says, is good enough to render dedupe unnecessary.

Having the SVC adds rack units of course, depending on the number of SVC nodes. It's not clear yet how many 840 enclosures an SVC head can support.

Tony Pearson, IBM master inventor and senior managing consultant for the IBM System Storage product line, says: "Each SVC node dedicates four of its six cores, and 2GB of its 24GB cache, to use with compression. Those interested in beefing up compression performance, either with FlashSystems or with any other disk, can choose the "Compression Hardware Upgrade Boosts Base I/O Efficiency" (affectionately known as the CHUBBIE) RPQ 8S1296 for SVC systems with software version 6.4.1.4 or higher.

"Basically, this RPQ adds another 6-core CPU and another 24GB of cache, so that each node can dedicate 8 cores for compression, and 26GB of cache for compression processing. Initial test results show this can increase performance 3x!"

He says that, by adding the SVC, the host attachment options widen: 8Gb/4Gb/2Gb Fibre Channel (FCP), 1Gb and 10Gb iSCSI, and 10Gb FCoE.

But there is a kicker: "Depending on the options and features you choose, the SVC layer adds a modest 60 to 100 microseconds to each read and write."

The 840 is shipped with either a one-year or three-year warranty.

That puts startup Nimbus Data's lifetime - four years and nine months - sales of 500 of its flash arrays in context. Once the big boys like IBM get motoring with their own flash arrays they can be expected to shift thousands of systems a year and cramp the startups in the market – so look out Kaminario, Nimbus Data, Pure Systems, SolidFire and Violin Memory.

We don't know which foundry supplies the 840's NAND chips nor what arrangements IBM has in place to safeguard its supply.

Now IBM has got its hand in, we can expect more announcements as it refreshes the FlashSystem range. Get an IBM Redbook 840 product guide here. ®