I can give this up any time I want. Honest

Something for the Weekend, Sir? I think I have 30 email addresses; I’m not sure. I suspect there may be others. I have them on every computer and even carry some around on my smartphone. At the height of my addiction, I was creating domains and distributing email addresses to my wife and my employees. I even gave some to my kids.

How did I let it come to this? This is my story.

Like everyone else, I started with just the one. I knew I could deal with the message load. Well, actually it was two email addresses: I was already getting a supply via an account at my workplace and this led me to start growing them in a spare bedroom at home by the light of a hydroponic angle lamp.

Two email addresses should have been enough for me; none of us should have more than two. On one hand, we all have a clenched-buttock address along the lines of dabbsa@amalgamated-durables.com and inevitably a slightly embarrassing home email address such as honkytonkman7359@yeehar.co.uk.

So where did my other 28 come from?

Back in the 1990s, my home stash came courtesy of CompuServe – the happiness being relative, of course, in that while CompuServe was creaky and somewhat unreliable, I wasn’t actually stupid enough to join the total fuck-ups AOL – when a pusher who went by the unlikely street name of "Jobsy" invited me to join something called eWorld.

It’s always the way: they start you on the soft highs and you think you can handle it but you can’t. It wasn’t long before I grew resistant to the hallucinatory experience of eWorld and began craving the hard stuff. So I joined CIX.

No offline reader for me. I preferred the cut and thrust of real-time command-line interaction as my phone bills soared. Soon, I was snorting on forums, spooning up newsgroups, and before I knew it, I was injecting file attachments.

I seems impossible now, but at the time, I saw no shame in my recreational use of electronic messaging. In fact, I was proud of it and duly listed all my email addresses in my sig and had them printed on my business cards.

As the heady days of the 1990s came and went, eWorld was reborn as mac.com which became me.com which became icloud.com. With each transition, ‘Jobsy’ upgraded the email addresses, and to this day his giant organisation considers them all current. I wish I could give them up but one of them is my Apple ID and I don’t know which.

Broadband came to my street and I duly signed up, only for my new supplier to offer me an email account completely free. How could I refuse? Soon afterwards, I registered a personalised domain for my freelance work, supposedly for a website but it came with five more email addresses.

I knew it had got out of hand when friends and colleagues began avoiding me. Well, actually I think they were emailing me to a variety of different addresses and I wasn’t able to check them all because I had too many. Things came to a head when my broadband connection went down for half an hour and I was forced to speak to someone using a telephone. I had truly reached rock bottom.

Over the following weeks, I cut up the worst of my email addresses with a pair of scissors and flushed most of the rest down the toilet, leaving me with just two accounts: one for work, one for home. This should, as I said earlier, be enough for anybody.

This is the most dangerous moment of all, during which you are most vulnerable. I believed I had endured my days in the messaging wilderness and come though unscathed at the other side but actually I had only reached the eye of the storm.

The nightmare began anew when I changed broadband supplier and was handed a card on which was printed my new email address. I hadn’t asked for one but they must have known how susceptible I was. I tried it out and didn’t like it much: it was sluggish and kept adding a mindfuckingly moronic ‘Sent from my Virgin Media’ auto-sig at the bottom. I didn’t use it again.

Emboldened by my apparent moral strength to resist the charms of this saucy ‘Virgin’, I went ahead and registered a new domain with web hosting and an associated email address package for my new business, just to prove that I didn’t really need it.

Even then, I thought it was manageable but the crunch came when one of my regular customers set up a workplace email address for me. Within weeks, I had registered two more domains and signed up for additional custom email addresses, and now I have lost count of how many I have on the go. Who know what messages they are all receiving? How many exciting financial opportunities from Nigeria will be left shamefully unanswered in so many dormant inboxes?

My personal admission and public humiliation is delivered to you here in advance of International Clean Out Your Inbox Week, which begins on Monday. 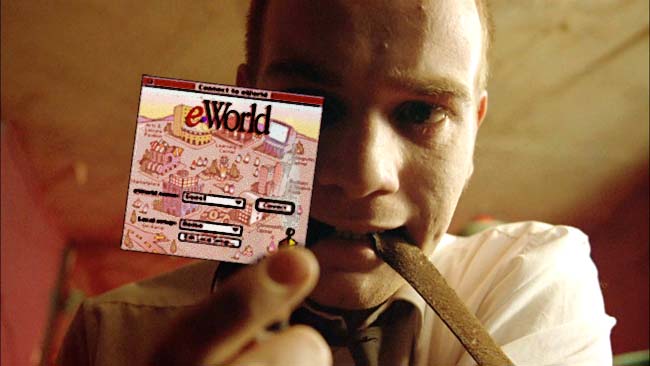 “No, thank you. I will proceed directly to the intravenous injection of attachments, please.”
Source: Channel Four DVD

However, what strikes me about this event isn’t so much that it is arguably just a steaming pile of PR bollocks devised exclusively with the purpose of promoting yet another deadhead management consultancy – which it couldn’t possibly be – is that it is incomprehensibly NOT focused on addicts like me.

My inboxes show no unread messages. My email accounts are organised into folders, labels and flags, and my email package makes use of smart searches of metadata generated in ways so devious that some of them risk infringing both the Official Secrets and Obscenity Acts in their distressingly inhuman use of Boolean constructs.

Everyone else I work with, as far as I can see, have unread messages dating back to the early 1960s. Unread messages outnumber read messages by 300 to 1. All important material is directed automatically to a Spam folder where it festers indefinitely. The chances of obtaining a response from these people is virtually nil; the best reply you can hope for is a misspelt one-liner hastily stubbed with a thumb while they’re on the road, usually on a bicycle and shouting obscenities at pedestrians as they try to run them over on zebra crossings.

I came to terms with my email addiction over Christmas, spending most of the break evaluating cross-platform email packages. I tell you, finding something that supports POP, IMAP, custom Exchange, Google weirdness and the frankly strange iCloud in one program without cocking any of them up is quite a challenge.

Suffice to say, I have it all sorted now and I am down to a strict diet of nine email addresses, covering work, play, press releases, app development and beta testing.

Excuse me while I check what’s just just popped into the inbox. Or would you rather I wait? I can wait. But it might be important. Oh just let me have a quick look, you don’t mind, do you? After all, it’s just an email.

I can give up any time I want. Honestly. ®

Alistair Dabbs is a freelance technology tart, juggling IT journalism, editorial training and digital publishing. He has no time for people who say that email is inferior to speaking on the telephone. These are the same kind of people who say we should favour local independent coffee shops despite the fact that they never have soya milk, run out of croissants by 7am, and serve everything in cracked mugs with brown stains inside and lipstick on the rim.