Crank out those coins: A selection of tools for the new Gold Rush

Product Round-up Bitcoins are either the new bubble economy or the future of online commerce. It’s not the first time anonymous e-money has been tried – ask Mondex – but Bitcoin does seem to have traction.

There are things you might want that you can buy with it, such as Tesla cars and Virgin Galactic trips to space. Zynga has announced that it will take Bitcoin for in-game payments, and there is a host of things you can buy through Bit Premier.

So, if you want to get into mining - perhaps you have some rack space doing nothing - you need to know what is on the market.

This is an ambitious article. It aims to tell you what is available and what it costs. In any other market that’s reasonable, but here products go in and out of stock constantly, driven by an erratic supply chain, particularly for chips. Prices reflect the value of Bitcoins, prices of rival hardware and the availability of that rival hardware. And much of this is shrouded in truths, half-truths and lies. Even more secretive is the company 21e6 which has raised $5m to build ASICs it will only use itself.

Comparing the miners starts with understanding what it takes to make a Bitcoin. Please forgive any over-simplification. Briefly, there is an algorithm to work out what is the next Bitcoin to be mined. Solving this requires a number of hashing operations. How many depends on how many coins have been minded previously so it’s an increasing level of difficulty. Initially this could be done with moderately specced PC but as more coins got mined this moved to using code, which took advantage of the super-fast graphics processors on video cards and then to dedicated hardware: ASICs designed purely to mine Bitcoins. Even these have evolved from homebrew to large technical teams.

If the bottom falls out of the Bitcoin market, all that equipment is useless. There is no other purpose to which it can be put. The processing is immense. While you can’t directly link mining hashes with FLOPS, it has been a couple of months since Bitcoin mining passed 1019 petaflops, or roughly the computing power of all the other computing tasks in the word - not allowing for what might go on in the NSA and GCHQ.

Which is where this round-up comes in. What hardware should you buy? How much money will it make and how easy is it to run?

The costs need to be balanced against the increasing global difficulty of creating a coin against all the other people who are doing the same thing. It’s an arms race of processor design against the rising difficulty. Newer, faster processors are more expensive but stand a better chance of producing Bitcoins against the rising difficulty, and are more power efficient. Power consumption is generally rated in Watts (W) rather than KW/h and processing in hashes per second, expresses as Gigahash (GH/s), Terrahash (TH/s) and even Petahash (PH/s), especially when looking at global figures. There is are a number of calculators to help.

A further level of complication is that the value of what you are producing is incredibly variable. Bitcoin value in terms of hard currencies are wont to fluctuate by 10 per cent or more a day. On 4 December, one coin was worth over $1,100, two days later it was under $700 and two days after that back at $900. You can see values double and halve almost weekly. Some hardware is bought in Bitcoins but there has been a trend to dollar pricing, even from European vendors.

This round up is a guide, a good starting point. You should be wary of a plethora of sites which are selling Bitcoin mining hardware and which don’t have a buzz about the products on the Bitcointalk forum. The business is full of scammers. In general the nastier the website the more likely the manufacturer is to be kosher. Those who are busy designing ASICs just knock up something in Wordpress. Scammers are much more likely to have time for finely crafted HTML 5.

AsicMiner is not the only company to both sell and use the hardware it has designed and built, but it still makes for an uncomfortable relationship with customers given the rapidly increasing difficulty of mining Bitcoins. A couple of days soak test before shipping can radically affect the profitability of the equipment. The company crowdfunded itself not using Indegogo or Kickstarter but through Bitcoin fora.

AsicMiner’s own mining operation, Allied Control, uses immersion cooling: it dips the boards into a very advanced 3M Novec liquid which boils at a low temperature to use the state change to absorb the heat very efficiently. This points the way for data centres, particularly those mining Bitcoins. 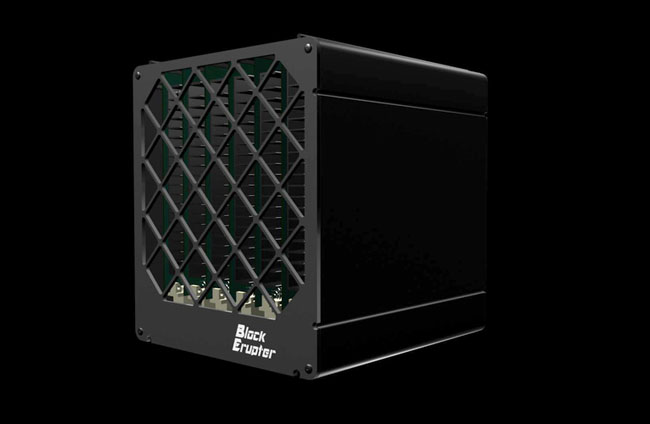 The initial product was a card containing 32 hashing chips and which plugged into an HP backplane. This has been superseded by the Cube, which uses the same 130nm ASICs but on four, smaller cards. Despite it’s finished appearance, the Cube needs quite a bit of work to get it going. It does not have a PSU built in: it’ll need one of at least 200W per card, more if you plan to overclock. Think around a kilowatt.

At the standard speed it’ll produce 30GH/s. Ramp up the power and you might get 38. To get it running you need to log into an incredibly crude on-board web server and configure it. This is non-trivial and involves writing a script to start the mining. It’s a shame that something which looks so plug-and-play needs so much tending. A web page which asked you which mining pool you wanted to join, what your wallet was and what speed you wanted to run at, would make it so much more attractive. However, AsicMiner seems to sell all the kit it makes and is one of the few companies with a solid history of shipping products, so perhaps it has no need to finesse the Cube.

Avalon was one of the first companies to make a Bitcoin mining ASIC, despite not announcing the chip until after its rivals had announced theirs. It was for a time the dominant chip vendor.

It sold the ASIC with Batch 1 and then Batch 2 hardware; there were rumours of Batch 3 hardware. People who had ordered one but didn’t receive hardware eventually got refunds, in Bitcoins – so at least they didn’t lose out on the appreciating value of the Bitcoins they had used to order the equipment. It’s widely believed that Avalon used the equipment to mine Bitcoins for themselves rather than shipping kit to punters.

Avalon Clones sells ready-to-go systems based on Avalon’s Batch 1 machine. They come with a PSU, a one-year warranty on the board and a web interface, but the year-old 110nm processors are so far behind the curve today that a $20,000 machine is out-performed by newer $2,000 ones. “Delivery may take two months or more after order,” the company warns.

This is a dedicated processing card fitted with 16 Bitfury ASICs and manufactured by the Belgian company CryptX. The design, by the German company Burnin’ Electronics, is reported to be the best using the 55nm Bitfury chips. It’s the rig I know best as I’ve been running a two-card set-up since early December. The kit includes the cards and spacer legs to form a tower. A supplied fan attaches to the edge of a heatsink which covers all the ASICs. You have to add power and control.

I used a 500W PC power supply and fooled it into thinking it was connected with a paperclip. For control I used a Raspberry Pi and the cgminer software. This talks to the mining pool over an Ethernet connection and to the Bitburner via USB.

One of my boards had a bunged up USB port which made re-flashing it very difficult, and forums are full of comments of similar problems. This hardware was assembled in a hurry. 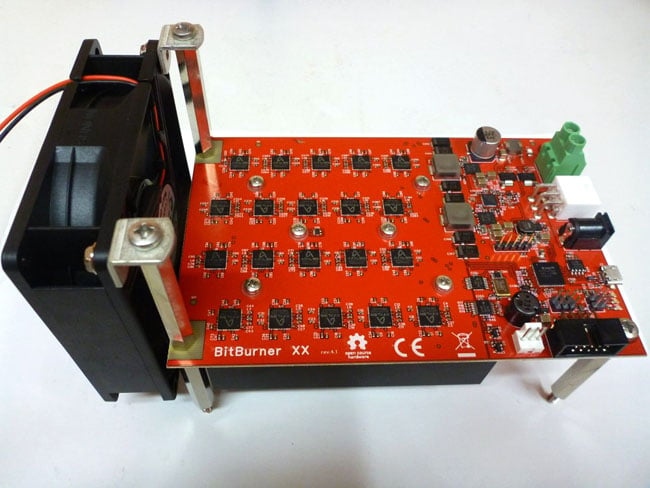 All control is by command line, so being comfortable with a Linux prompt is a bonus in the Bitcoin learning curve.

In use, cooling is everything. I found that the single fan over two cards was not enough to keep the temperature below the 60°C at which it stops working unless I sat it on a window shelf and opened the window a crack. With a second fan and the window still open I could crank up the overclocking to get around 100GH/s combined from the two cards.

Not allowing for the heat loss to the room the electricity cost works out at around 2p/hour. The cards cost around £1500, although they were bought in Euros. It then gets a bit man-maths. Over the month of December as the network difficult grew, the rig dropped from producing one bit coin every ten days to one every 25 days. Given a Bitcoin value of, say, £500 which is as good a number as any, it should pay for itself in six to eight weeks. It will have to run slower in the summer.

Bejing-based Bitmain Tech does all it can to look suspicious: it’s bad at answering personal mails through the forums and primarily communicates through Twitter. It does have a website now. Products have, however, shipped and they seem kosher. One customer even posted a video.

The AntMiner S1 is the firm’s first product based on its own BM1380 processor, a 12mm² 55nm device with eight cores. The S1 uses 32 of these chips and is rated to consume between 80 and 200W to produce 180GH/s at a clock speed north of 400MHz. It does not need to be plugged into a computer to run as it has its own Ethernet connection but it does need an external PSU. 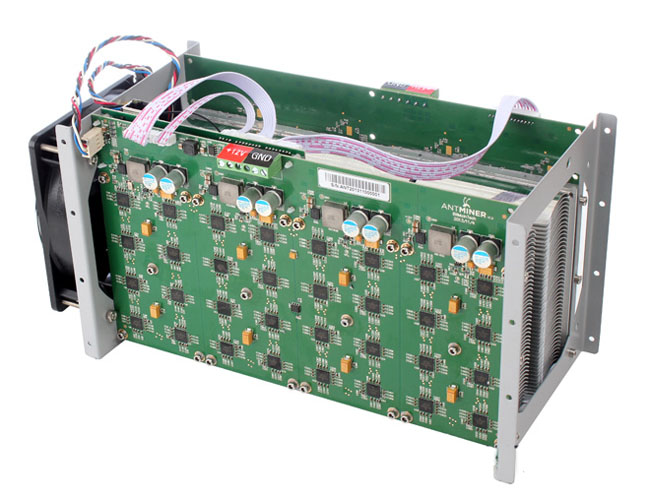 Nothing in the Bitcoin world is plug and play. Getting the S1 running means changing your router subnet while you configure it. You can set voltage, time-out and clock speed. Finding the balance between the cost of running the thing, overheating and getting nothing, and not getting enough processing, is precarious. Users say the single fan is adequate but only just. A second one might be advisable, particularly since the fan is quite loud.

If you want one, you’ll have to hang around the Bitcointalk forum or keep an eye on Bitmain’s Twitter feed for the announcement of an auction where the latest batch to be produced is sold off in a couple of hours. The last 120 units went for 4.25 Bitcoins.