The ten-inch Android tablet that takes a stand

Review Do tablets have to be dull, flat slabs? If you are Asus, Apple, Samsung or Nokia, the answer to that question is clearly ‘yes’. Sure, each may boast a decorative lip here, an extra button there, or an unusual profile curve someplace else, but essentially they all look much the same.

Sony once tried something different with its Tablet S and P models, but then made the Xperia Z Tablet another slab. Diversity of form, then, is not a keynote of the rise of the tablet. Until now. 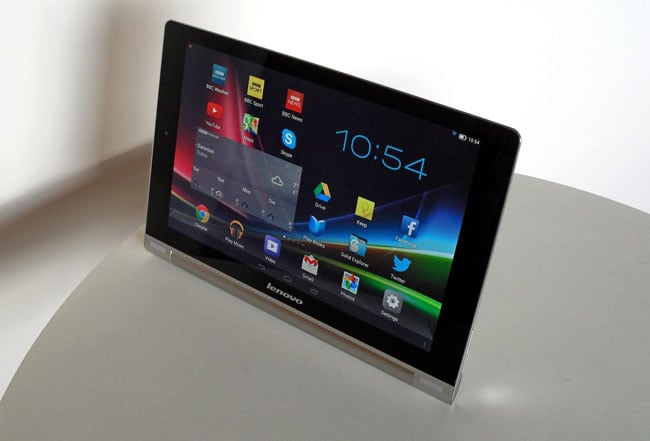 Lenovo’s Yoga 10 may have mediocre innards (about which more below) and a rather average screen, but by heck its designers have been at the Shredded Wheat. In a number of rather important ways this is the most usable slab I have ever had the pleasure of fondling.

Let me give you a guided tour. On three sides the Yoga 10 is just another plain old Android tablet. It’s an average of 5mm thick and no wider or taller than it’s 10.1-inch screen necessitates. But at the bottom – assuming you are holding it so the Lenovo logo is the correct way up – is a 20mm diameter rounded protrusion. Think of a generic Android tablet with a long rolls of £1 coins glued to the bottom and you get the idea. Built into the rounded end is a small, pull-down stand.

The benefits of the this design are several. Pull the stand down and the Yoga stands up at an angle of around 80 degrees. The stand is deep enough to let you use the touchscreen without the thing toppling backwards. Leave the stand open but flip the Yoga over and you can rest it on a flat surface at around 20 degrees. Or you can close the stand and rest it at about ten degrees. Between them, these positions have most bases covered. 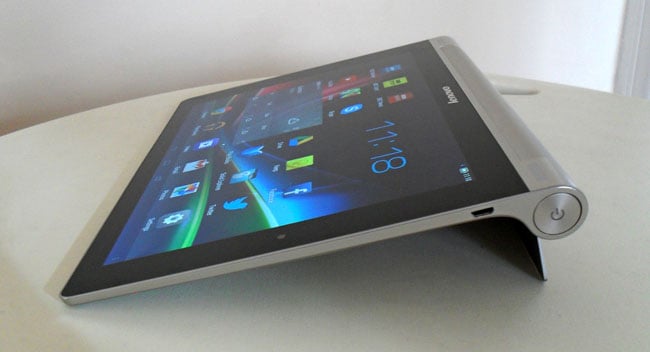 Usefully the volume controls on the side swap polarity so no matter which way you have it, the top button increases volume while the bottom one reduces it. There is also a screen adjustment toggle in the settings pull-down that makes subtle changes the brightness, contrast and sound settings for Tilt (at a slight angle), Stand (upright) and Hold (handheld) modes. That’s the sort of attention to detail I like to see.

Assuming you want to hold the Yoga rather than rest it on your desk, bed or coffee table, the bar makes an excellent hand grip. I took to holding the 605g Yoga 10 by the bar as an ebook reader like a Catholic takes to guilt. If holding your 10-incher in your hand is something you anticipate doing regularly [Steady on, old chap – Ed] the Yoga 10 is self-recommending.

The rounded edge also does a few extra jobs. It houses the power button and a 3.5mm audio jack in places you never have to search for and behind the flip stand are the slots for Micro SD and SIM cards, though there is an issue with the former: the memory card slides all the way into the slot so I only managed to trigger the spring to get it back out with the aid of an expertly bent paper clip. The tubular section also means there is room for two forward-facing speakers at each end. 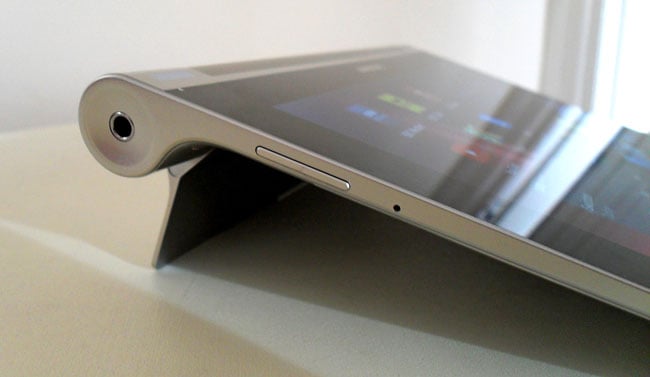 The sound buttons cleverly switch so the topmost of the two always ups the volume, whichever way up you hold the tablet

Now these speakers - despite Dolby Digital Plus enhancement - are not exactly game changers and sound just a wee bit tinny. But they do pump out a fair old volume and make a decent fist of stereo separation. And the position means you are not forever accidentally covering them with your hands when holding the device.

For it’s decidedly mid-range asking price - £249 direct from Lenovo - the Yoga 10 is pretty well made too. The silver and black casing feels solid and robust while the hinged stand is reassuringly stiff and I suspect well able to withstand a lifetime of use and abuse.

If all this sounds too good to be true, there are some downsides and cut corners. The 1280 x 800 LCD IPS screen isn’t the sharpest around as you can guess from the numbers, and though it is very bright and demonstrates excellent levels of contrast, the colours are a tad wishy-washy and lacking in saturation. Viewing angles are solid though, which is just as well given the form-factor. 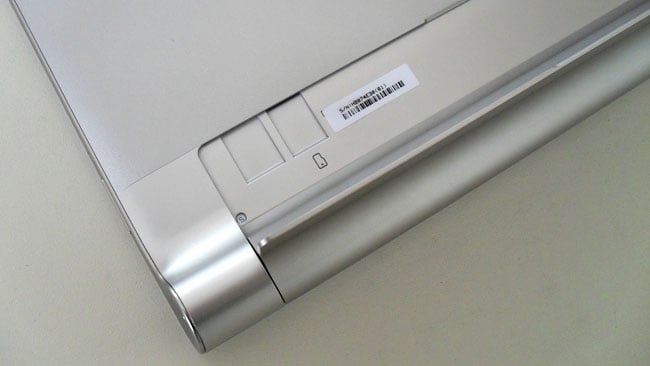 There are Micro SD and SIM slots tucked into the stand