A set of screenshots leaked to the web purports to show how Microsoft is working to better integrate Metro-style apps with the classic desktop in a forthcoming update to Windows 8.1.

The screenshots, which were posted online by Russian serial leaker "WZor," were allegedly taken from a prerelease testing build of Windows 8.1 Update 1, which Redmond is expected to ship sometime in 2014.

Note that this will not be the much-ballyhooed "Threshold" update, which is thought to be so massive that Microsoft will actually brand it Windows 9. That one's not expected to arrive until April 2015, according to the latest theories, although Microsoft may tease some ideas about it at its Build developer conference this April.

Instead, the latest scuttlebutt says the first update to Windows 8.1 will be something more akin to a Service Pack – even if it isn't called one – and among other things, it will help to align desktop Windows 8.1 with Windows Phone 8.1, which is also due this year.

But that doesn't mean the update won't add any new features to Windows 8.1, and if WZor's screen grabs are genuine, at least one change could be a boon for users who were put off by the interface formerly known as Metro (TIFKAM).

Take a close look at this cropped detail of one of the screenshots, and pay special attention to the Taskbar: 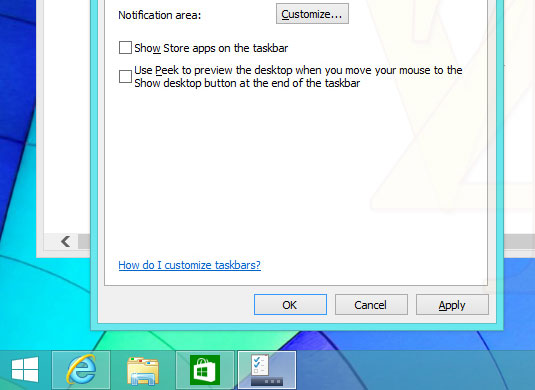 At first glance, it looks like the now-familiar Windows 8.1 Taskbar, complete with its disappointing Start button, but something is new here. The green shopping-bag icon looks suspiciously like the Live Tile that's used to launch the Windows Store app from the Start Screen.

Sure enough, if you look higher you'll see the bottom half of the traditional Taskbar and Navigation Properties panel, where a new checkbox enables displaying icons for Windows Store apps in the Taskbar.

Previously, Windows 8.x users have been given little indication of which Windows Store apps are running while they're in desktop mode, and vice versa. With this feature enabled, it seems, Windows Store apps will appear in the Taskbar alongside running desktop applications, making it easier for users of PCs with traditional mice and keyboards to switch to them.

It's not clear how the Windows Store app icon got there in the screenshot, however, because the checkbox isn't checked. Presumably you'll also be able to permanently pin TIFKAM apps to the Taskbar so you can launch them from there.

The ability to put Windows Store app icons on the Taskbar is a small change, maybe, but according to veteran Redmond-watcher Paul Thurrot, it's just one of several updates that Microsoft has planned to make Windows 8.1 more accommodating of PCs.

Another will be that Windows Store apps will have an "X" button in their upper right-hand corners like desktop windows do, Thurrot claims, allowing users to close them with a tap or mouse click. Previously, the only way to explicitly close a Windows Store app was to swipe or drag downward from the top of the screen, which was hardly intuitive.

WZor's screenshots don't show that feature, however, and what no leaked screenshots have shown so far is true integration between the two Windows 8.x modes, with Start Screen apps running in windows on the desktop. But Thurrot thinks this may be coming in Windows 9 next year; we'll see.

As for Windows 8.1 Update 1, not much else is known about what technical changes it will bring. What the rumors are saying, though, is that it will be a free update and that Microsoft will finish work on it in March and ship it in April. If that's accurate, then the smart money says to look for it around the time of the Build conference, which will run from April 2–4 in San Francisco. ®