Growing revenues, profits on the up: WD sails on serenely

Everything looks rosy to CEO Steve Milligan: ”We executed well in the December quarter as we continue participating in the ongoing growth of data in all of our served markets… We serve very large markets underpinned by strong data growth prospects.”

WD manufactured 63.1 million disk drives in the quarter just ended; slightly up on the first quarter’s 62.6 million. It made $155m in enterprise SSD revenues. (these results are for WD only, by the way, and not its HGST subsidiary which reports separately) 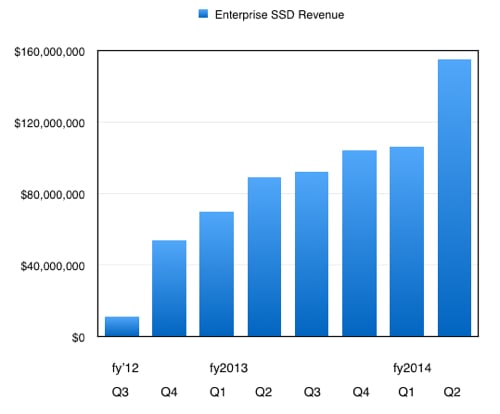 After the initial jump in the second quarter growth was steady – until the latest quarter when there is a pronounced jump from $106m to $155m. What gives?

Financial analysts Stifel Nicolaus' MD, Aaron Rakers, pointed out that there was “a full quarter of sTec and VeloBit, as well as mid-Oct close of Virident acquisition.” He said the SSD revenue jump was helped by “one single-source opportunity that drove solid results,” and the “majority of revenue [was] derived from enterprise SAS SSDs.”

Getting back to spinning drives, WD saw “strength in gaming and branded shipments … and continued signs of stabilisation in PCs.”

Average capacity per drive was 874GB; in the previous quarter it was 811GB.