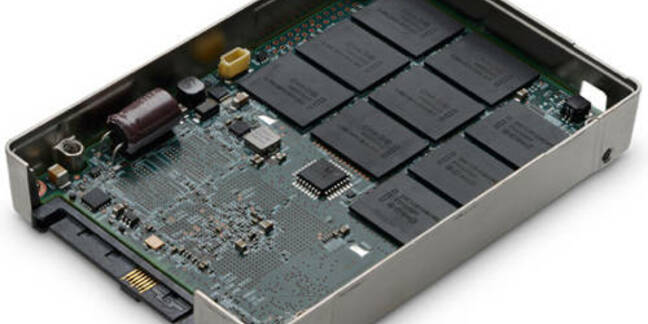 Amazon has added compute nodes with flash drives to its cloudy data warehouse Redshift – as the e-retailer turned computer-renter takes on Teradata, Greenplum, Oracle, IBM and the like.

The two "Dense Compute Nodes" were announced today by Bezos & Co: these are solid-state-drive-backed server options to sit alongside the disk-based Storage Nodes.

"The Dense Compute nodes feature a high ratio of CPU power, RAM, and I/O performance to storage, making them ideal hosts for data warehouses where high performance is essential," the web bazaar wrote in blog post.

"You can start small, with a single Large node for $0.25/hour, and scale all the way up to a cluster with thousands of cores, terabytes of RAM, and hundreds of terabytes of SSD storage."

The company claimed that if customers were storing less than 500GB of compressed data in the Redshift data store, then the "lowest cost and highest performance option" is the new nodes.

This is likely because the Redshift tech (based in part on ParAccel's database software) is based around columnar data storage with advanced compression techniques and fast disk and network I/O. By adding in SSDs, companies can get a better I/O performance and reduce turnaround times on complex queries, though their storage will be more expensive at scale.

Amazon launched the Redshift service in November 2012 and claimed the service would be cheaper than those offered by incumbents.

The service is one part of a new emphasis by Amazon on targeting enterprise jobs, and moving away from the bare bones infrastructure-as-a-service tech that Amazon Web Services is best known for. Redshift sits alongside other high-level tools like the Elastic Beanstalk platform-as-a-service, and the Citrix-slaying Workspaces VDI tech.