OEMs will love this just like they loved Surface

The patent, published last December, offers a chassis design that assumes blades – storage, compute, network switch and hybrid blades all get a mention – will reside in trays and be inserted horizontally. The trays will provide and plug straight in to sockets for power and network connectivity.

Such an arrangement, the patent appears to argue, reduces cabling complexity and hassle.

Here's part of Microsoft's description of the design:

“Presented herein are configurations of a multi-blade computational unit architecture involving a chassis comprising a number of slots respectively configured to support an insertable tray hosting one or more blades of the server comprising a set of blade components. The chassis and blade provides power and network connectors that are positioned to couple upon insertion of a tray into a slot of the chassis, thus avoiding the inclusion of cables and the manual manipulation thereof.”

That sounds nice but hardly revolutionary.

The patent application also mentions a “chassis unified connector” providing power and data, which would be interesting as Power over Ethernet has generally been imagined as a way to fuel rather less energy-hungry devices than servers. Another feature Microsoft talks up is the ability to house blades of different sizes in one chassis, instead of a one-size-fits-all approach. 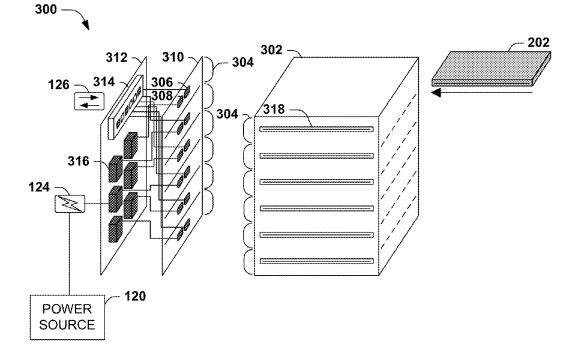 One of the images describing Microsoft's blade server design

There's also a discussion of integrating storage and compute blades. GPU and other specialist blades also get a mention elsewhere in the patent.

While it is not explicitly described, the patent could – if one draws a long bow – perhaps be considered almost a design for a kind of modular server. Built-in management components are also mentioned. Again with an optimistic eye, might that be a chance for Microsoft to embed some Hyper-V and/or System Center goodness in a blade chassis and have it orchestrate a server's components? Could software-defined-networking and virtualisation then get a new twist as physical and virtual resources become manageable in new ways?

An innovation of that sort might just quiet Microsoft's friends in server-land, as integration of OS, management layer and hypervisor is probably beyond them. But with some of Microsoft's server-land friends also having been stung by Surface, this patent could also provoke some testy questions, even if Redmond has only a stream of royalties in mind.

Or perhaps the patent describes how Redmond wants to build Azure bit barns, in which case everyone can move along because there's nothing to see here. ®