Quivering, spine-tingling wearable tech: Strap it on and don't look back

Review If you’ve never had back pain, then thank your lucky stars. It can make a 20-year-old feel like they’re 100 and it’s a sore point that I know this to be true.

If you’ll excuse the pun, you’re not necessarily lumbered with back pain as a life sentence, some problems can go away over time but they can just as easily return if you’re careless, with poor posture being a major contributor. 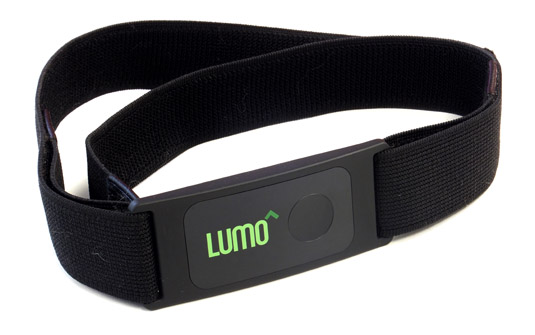 These days, I usually have myself to blame for the odd twinge more often than not associated with slobbing around at home with a laptop. Yet back at the office is when I begin to suffer for it, sitting for hours with an achey reminder of some prolonged lazy moments of poor posture. So I have to admit, I was intrigued by the LUMO Body Tech’s strap on detector that aids sitting and standing correctly, among other things.

The company has the backing of Google's Eric Schmidt and Yahoo! co-founder Jerry Wang, which suggests it must be doing something right to get those two to sit up straight and take notice.

The LUMOback is one of those Bluetooth-of-Things gadgets that links to an app and builds up a record of your movements and even clocks up a Posture Score. To be honest, I thought it would be useless, but it turns out to be cleverer than I had given its makers credit for - even though it’s extremely simple to configure.

In appearance, the sensor is much like a buckle in an elasticated belt. However, you position it on your lower back and fasten the adjustable strap at the front with Velcro. It feels a bit weird at first but you soon forget it’s there and if you are bothered by it, then making some strap length adjustments tends to do the trick.

Before you strap up, though, you’ll need to charge up the sensor from the micro USB port. There’s an adjacent LED that, besides charge status, will glow blue to indicate the Bluetooth connection with an iOS or Android device has been established.

On the front of the LUMOback next to the logo which handily shows you which way up it should be, there’s just one large recessed button. Press it and the LUMOback vibrates into life with a green flash, press again and it flashes red, vibrates twice and turns off. It’s that simple, all the complicated stuff is covered by the app. 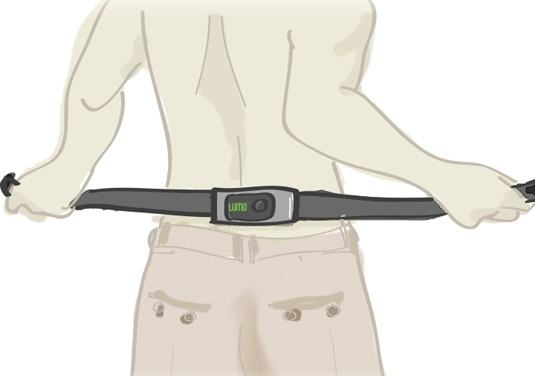 Lighter than most belt buckles, positioning is easy to establish and doesn't require too much adjustment

My testing was focused mainly on the iOS app, as the Android version has only recently appeared.

Incidentally, it warns that the LUMOback needs the latest firmware, which it should load into it during set-up. With the strap-on in place and connected, there’s a login profile to create – demanding with height, weight, gender and age – along with a calibration procedure to follow that involves walking and sitting positions to orientate the sensor.

I have to admit that I wasn’t entirely sure I was in the proper seating pose and it’s far too easy to quickly flick through these initial set-up stages. For calibration, surprisingly there’s no back button for this back app so if you think you’ve messed up, you’re better off going through it again. Thankfully, once the initial out-of-the-box routine is complete, the app settings do allow you to alter various calibration aspects individually. 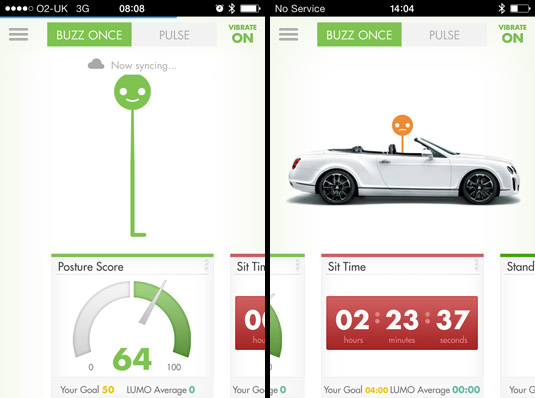 For the most part, you can ignore the app when wearing the LUMOback but there are additional refinements that I’ll come to in a moment.

As I spend a good deal of time sat in front of a computer, the sensor was in its element, giving single half-second vibratory hints to stop me from slouching. You can opt for a burst of vibration with Pulse mode, but this can be a bit distracting. If all gets too much, vibrations can be disabled altogether, yet the posture monitoring continues.

I have to say, I wish I’d noticed this option sooner, as taking the train home had its moments. The rake angle of the passenger seats isn’t ideal for posture and as I reclined, the LUMOback would persist in prompting me to sit up straight. While I could disregard the buzzing, the chap sat next to me kept checking his phone. It’s that loud or that quiet, depending on how you look at it. 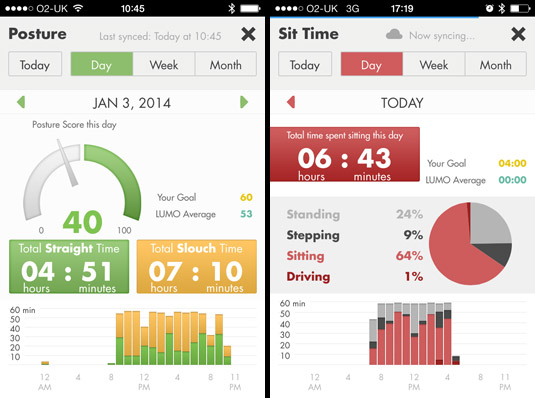 Find out just how much time you spend arsing around

As Southeastern hasn’t grasped the concept of adding carriages to trains, half an hour of standing each morning whilst leaning against solid objects, can be just as bad. Indeed, the LUMOback works best when you’re not walking. It doesn’t seem to focus on posture when in motion – so if you’re in the habit of becoming slightly stooped when its windy, it won’t prompt for a more upright stance.

That said, the app doesn’t ignore the information it receives and it logs the amount of time you spend sitting, standing, walking and sleeping.

I didn’t fancy wearing it overnight to test the latter but daytime dozing at weekends was noted accurately. However, according to the app, I’ve spent two minutes asleep at my desk writing this. Still the detailed sleep position information can be useful in tracking persistent neck and shoulder pains. 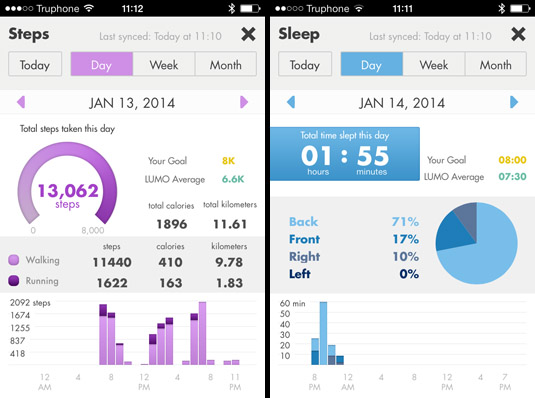 Not only does it count your steps, it even knows how you're lying when sleeping

Besides the sensor buzzing, the app assists in getting things straight with some realtime animation. A simple character bends and straightens to resemble your posture, going from green (good) to orange (bad). Sometimes it seemed fairly easy to please, other times it was extremely fussy. I found just moving the sensor half an inch lower could make all the difference, as the strap on can ride up with wear.

Within the settings the Advanced Vibration Control enables you to change the buzz intensity and timing with the Bad Posture Threshold helping to manage its fussiness with options ranging from barely slouched to extremely slouched.

If you need some help regarding exercise, the app features short animated videos from iRehab – although I'd assumed the Cervical AROM Retraction routine wasn't a guy thing, it actually refers to the cervical vertebrae in the neck. 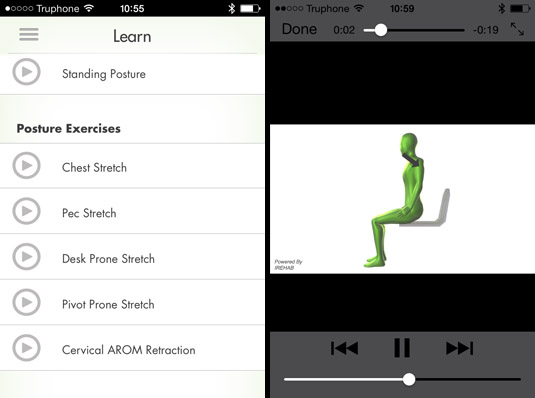 Posture tutoring videos are available within the app

As you accumulate data whilst wearing the LUMOback, the app starts to look more interesting. It creates a Posture Score with neat graphics that outline the amount of Straight and Slouch time you’ve spent over the days, weeks and months. The Steps section shows running and walking as well as distance and calories, so it doubles as a proper activity monitor and can share data by synchronising this with the free MyFitnessPal app.

Currently, there isn’t a separate LumoBack web login to view your data online which the likes of FitBit or Withings provide. MyFitnessPal does have an online portal but what it receives from the LUMOback app is just the calorie burn information, so there’s room for improvement here and I'm told a web app is in the works for launch this summer. 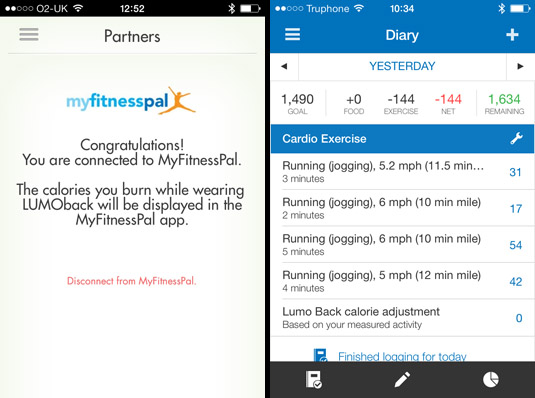 Lumo Body Tech is also keen to hear from developers, but its website doesn’t offer any other information in this respect, only an email contact, but I'm told 2014 will see a Cloud API published that gives developers access to individual historical posture and activity data. A sensor SDK is coming too, delivering real-time access to individual posture and activity data from the sensor – user consent notwithstanding.

There's quite a bit of data to play with too that can allow for more in-depth studies for those with critical problems. Sit time, posture, movement and sleep data can assist in physical therapy, chiropractic care and mobility assessments, pre- and post-treatment. 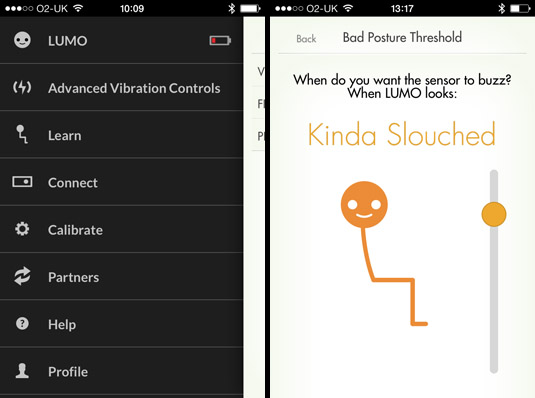 Having worn the LUMOback for a while now, I’ll admit I have mixed feelings about it, but this might have more to do with the chairs I sit on than the device itself. When I paid proper attention to the sensor I did avoid the usual aches I’d expect after hours of typing sitting on a less than perfect chair. However, I did find I had different aches that were more of a muscular variety. Evidently, there’s a bit of effort involved in sitting up straight .

Yet with extended use, there comes a point where you tune out from the prompts it buzzes at you. Sit back for a moment, bzzt, in conversation at a restaurant, bzzt, on the loo, bzzt, oh please… and on it goes. So is there any ongoing benefit in enduring this spine tingler? To find that out, I visited my osteopath, Dennis Picknett, a cracking fellow who’s put me straight on many an occasion.

I’d not seen him since late last year, so apart from his opinion on whether this device was doing any good, I was curious to see if his expertise would help with the calibration. Occasionally, the Lumoback gets super-fussy and it seems that there are two ways around this: charge it up or recalibrate. If the latter doesn’t work, then there’s a chance you were never sitting correctly in the first place. 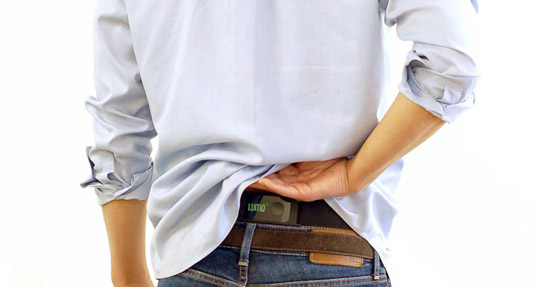 It can get a bit sweaty but it's not waterproof

With some fine-tuning from Mr Picknett, once I was in the posture he considered to be correct, I hit calibrate. Since then, the Lumoback seems to be fairly content and as you can track your position in realtime, it seems to be spot on now. It was never that far off previously, but I think Lumo Body Tech would be wise to place a heavier emphasis on the posture set-up procedure, as it’s quite easy to skip through it quickly and there have been a few moans online about erratic readings.

As for the professional view, my osteopath could see how the Lumoback was endeavouring to heighten the user's long term and real-time postural awareness – something that physical therapy such as osteopathy, Alexander Technique, the Feldenkrais method and Pilates all aspire to. Adding that osteopaths can achieve good results by physically adjusting the bones and muscles of the body but to maintain this change inner awareness has to take over. So maybe a vibrating strap-on can help.

If you’ve a serious back problem then you’d need a serious opinion on how useful the LumoBack will be to you. At £129 it's cheaper than two or three osteo sessions and might keep you out of trouble from time to time, but won't work magic.

Although it has activity sensors that can broaden its scope considerably regarding overall fitness, I’d be be more inclined to wear it as a preventative measure during lengthy writing sessions to set me straight, rather than experience the daily ritual of getting a tingle out of this spinal strap-on every time I bend over. ®

Quivering, spine-tingling wearable tech: Strap it on and don't look back

Vibrating posture sensor that links using Bluetooth to a sophisticated monitoring app with additional activity tracking for use with MyFitnessPal.
Price: £130 RRP