IBM has revealed a radical new user interface for email at its Connect 2014 conference in the USA.

Dubbed Mail Next, the new interface is inspired by social media and billed as a quantum leap beyond the likes of Outlook.

There's a lengthy explanation of the approach in this video of a Connect keynote. We've asked IBM for high-res shots but Big Blue hasn't been forthcoming as yet, so the screen grab below is the best anyone can do for now.

IBM says this interface is a scientific approach to coping with multiple incoming communications across multiple channels and uses analytics to turn personal information managers into tools that use analytics to help knowledge workers understand what to prioritise. Such an interface is needed, IBM suggests, because a decade or more of personal information managers and unified communications tools haven't improved many knowledge workers' feeling of being overwhelmed by email. 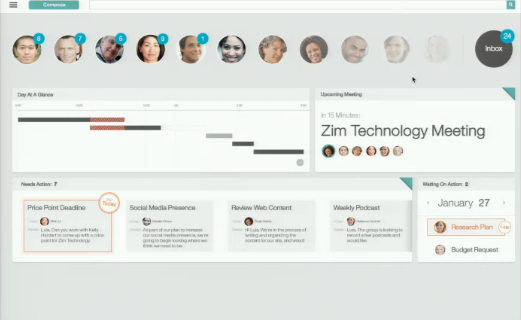 What's the interface about? The row of headshots at the top is a user-defined set of people who matter to a user, with indications of recent messages (or perhaps social media posts) from those people. Imagined as a replacement for email folders speakers at the conference suggested the circles could instead be attached to a workflow to indicate progress on a task. The row of tiles at the bottom is a to-do list and items can be added to it by dragging a message onto a tile.

The panel at centre left is a concept design for a calendar while the centre-right panel is a notification for a worker's next meeting.

Later in the demo IBM's program director for messaging and collaboration solutions Scott Souder showed off what might happen when one clicks on a person's icon from the top row, namely presentation of their recent communications across multiple applications and (internal and/or) external platforms.

Souder told the conference this interface is not set in stone, but that this is the direction IBM wants to take email for knowledge workers and that Big Blue sees an opportunity to challenge its messaging rivals with radical change. Souder also admits this kind of interface is not for every organisation: a more traditional interface could be useful for those whose working lives aren't quite so collaborative. But IBM expects to have a final version of this interface in the market during 2014 for the PC and mobile devices, and customer testimonials for this approach to email on the agenda at Connect 2015. ®