Que, QI host? WHAT DO YOU MEAN Kildall was 'cracked'?

What are we to do with Stephen Fry? Britain's go-to guy for advertisement voice-overs has had another attempt at explaining computing history, in his own unique way. But he's got it wrong, and at the same time sullied the memory of one of the industry's true pioneers.

Writing on his blog and at The Daily Telegraph, Fry - celebrating the thirtieth anniversary of the Apple Mac - tells us all about the fateful days of the early 1980s, when Bill Gates and IBM came together to produce PCs running Microsoft operating systems, defeating the early Macs and Steve Jobs with them.

Mr Fry tells us IBM needed Gates and his operating system, because:

[IBM's] original operating system CP/M and its creator had, not to put too fine a point on it, cracked. Crucially, Gates insisted that he could licence [sic] his MS-DOS not just to IBM but to other computer manufacturers and plumb spang into that trap IBM fell. They had thought the money was in the box, not in the OS.

Stephen is plainly unaware, to begin with, that CP/M was not a piece of IBM software. It was actually created by Digital Research founder Dr Gary Kildall. With CP/M Dr Kildall (not Bill Gates) had truly pioneered the portable operating system for microcomputers – an operating system capable of running on different kinds of hardware that created a common platform for application developers and users – and the low-cost licensing model that went with it.

Worse, it seems clear that Mr Fry is also unaware that the QDOS which Gates so hastily bought up to offer to IBM under the name MS-DOS was a poor-quality effort (QDOS actually stands for Quick and Dirty Operating System) which had been created by simply copying code straight out of CP/M.

Yet again, Stephen Fry's credentials as a technology guru turn out to be tissue thin.

But that's not the worst of it. What on Earth can Mr Fry mean when he says that Kildall (whom he never mentions by name) - the creator of CP/M, and in truth the man who built the foundations of QDOS, Gates' MS-DOS and the fabulous Microsoft money mountains - had "cracked", and that, moreover, his work was faulty?

The only thing we could imagine Fry means is that Kildall was mentally ill at the beginning of the 1980s. This is a completely brand new idea fresh from the mind of Stephen Fry.

Falling through the cracks

What's the real story? For a long time Kildall's status as a PC industry pioneer was eclipsed, with Gates taking the plaudits for both the technical concept and the business strategy of platform licensing. Fortunately, the true historical record has been restored in recent years - largely thanks to Harry Evans' outstanding 2004 Time TV documentary and its accompanying book, They Made America.

Kildall had also held extensive discussions on licensing CP/M for the IBM PC. Upon learning that IBM was also talking to a small languages company called Microsoft, Kildall was relaxed, telling a friend "Bill's a friend of mine. He wouldn't cut my throat," Evans writes. 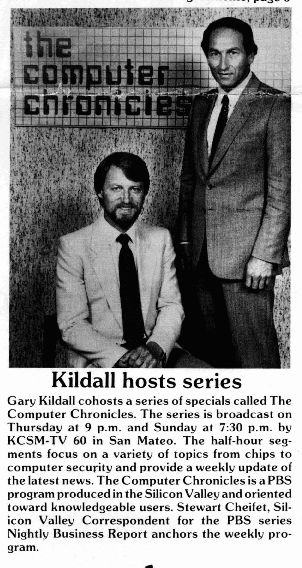 But in fact Gates went out and acquired the rights to an amateurish copy of Kildall's CP/M - QDOS. "We should have gone in and sued Microsoft very early on," a colleague of Kildall's told your reporter in 2007.

Kildall and Digital Research mounted a legal protest against the IBM/Microsoft hookup, and managed to extract a promise to include CP/M in the box with PCs, but it would later emerge that certain adverse terms and conditions applied ... When the PC was released in August 1981, MS-DOS was priced at $40 and included in the box. CP/M cost $240 and required the user to fill in a form and receive the disks by mail.

Kildall's work didn't end at CP/M, of course. In 1983, he hosted the PBS show Computer Chronicles and subsequently appeared on the show for several years. After completing the multiuser OS MP/M, Kildall oversaw the development of the portable graphical interface GEM and independently developed the Grolier Multimedia Encylopedia - the first CD-ROM encyclopaedia, years ahead of its time.

You can judge for yourself whether Kildall was "cracked" in the 1995 PBS retrospective on the computing legend:

Kildall's health deteriorated in the early 1990s and he died in 1994 of a brain haemorrhage. (The misinformation and even disinformation continues, however.)

Fry's somewhat careless approach to the facts when it comes to technology has been featured here before. A year ago, the actor flew into a rage after we'd pointed out one of his more trivial errors.

This isn't a trivial one, and given that the dead can't defend themselves, we hope that this time Fry will refrain from shooting the messenger and correct his error. ®