Anti-NSA hackers defaced ‪Rovio's official Angry Birds website ‬on Tuesday night as a reprisal against revelations that GCHQ and the NSA were feasting on data leaked from the popular smartphone game. 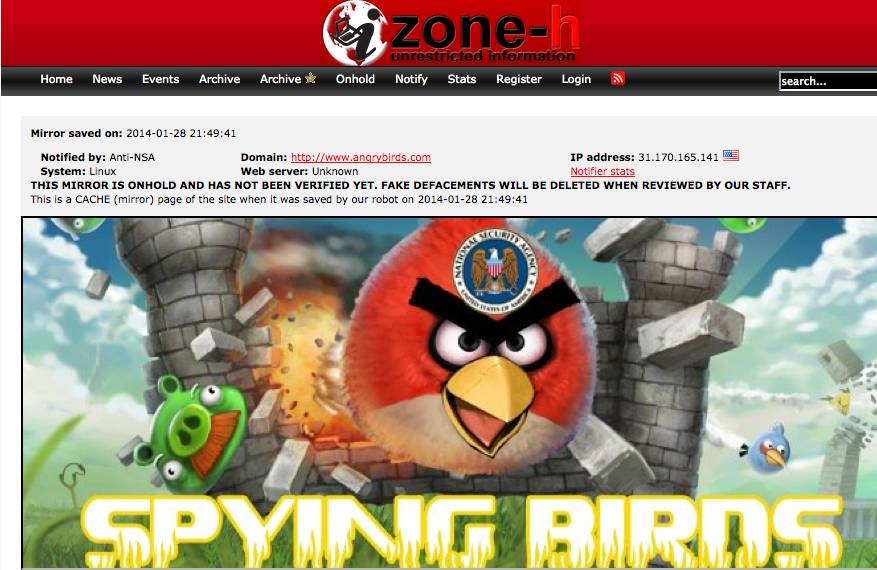 Angrybirds.com became "Spying Birds" as a result of the defacement (Zone-h mirror here). Rovio has confirmed the defacement, the International Business Times reports.

The ‪Angrybirds.com ‬website was back to normal by Wednesday morning. The defacement, which Zone-h has yet to confirm is genuine, must have been brief. Defacing a website is an act more akin to scrawling graffiti on a billboard put up by a company than breaking into its premises and ransacking its files.

It's unclear how the defacement was pulled off by a previously unknown hacker or defacement crew using the moniker “Anti-NSA hacker”.

"It’s not clear if Rovio’s web servers were compromised or if the hacker managed to hijack the firm’s DNS records and send visiting computers to a third party site carrying the image instead," writes security industry veteran Graham Cluley.

"Whatever the details of how the hack was perpetrated, it appears to have only been present for a few minutes and the company made its website unavailable for 90 minutes while it confirmed that its systems were now secured," he added.

Files leaked by NSA whistleblower Edward Snowden showed the NSA and GCHQ were slurping data from smartphone apps to harvest all manner of personal information from world+dog. This information includes users' locations, their political beliefs and even their sexual preferences. ‪

Angrybirds.com ‬was used as a "case study" in the leaked files, hence the hackers' focus on Rovio – even though a great number of smartphone apps from other developers are involved in the dragnet surveillance program.

Rovio issued a statement in the wake of the revelations stating that it "does not share data, collaborate or collude with any government spy agencies such as NSA or GCHQ anywhere in the world," stating that third-party ad networks may be to blame for the leak.

The alleged surveillance may be conducted through third party advertising networks used by millions of commercial web sites and mobile applications across all industries. If advertising networks are indeed targeted, it would appear that no internet-enabled device that visits ad-enabled web sites or uses ad-enabled applications is immune to such surveillance. Rovio does not allow any third party network to use or hand over personal end-user data from Rovio’s apps.

These arguments cut little ice with privacy activists who pointed out that whether the data leaked from Rovio or ad networks was immaterial: how the companies make their money and deliver their technology makes little difference in practice for users of their popular games because the end result is the same.

"The online advertising industry weakens Internet security, and has created pathways for hackers and gov agencies to exploit," said Christopher Soghoian, principal technologist of the speech, privacy & technology project at the American Civil Liberties Union, in an update to his personal Twitter account. ®